Editor’s Note: SolveClimate News reporter Elizabeth McGowan traveled to Northeastern Pennsylvania in late March to find out how the gas drilling boom is affecting the landscape and the people who call it home. This is the fifth in a multi-part series. (Read parts one , two, three and four)

MONTROSE, Pa.—If a cash register freshly laden with greenbacks is any measure of happiness, then Susan Griffis McNamara should be one of the most content residents of this tiny borough in Northeastern Pennsylvania.

Instead, her stomach is in knots.

The 45-year-old is aware she owes part of the bump in business at her lumberyard and hardware store to an energy boom she’s witnessing in her native Susquehanna County. Exploration and drilling companies have swooped into this somewhat hardscrabble locale to capitalize on what geologists have christened the “sweet spot” of natural gas entombed thousands of feet below this mountainous terrain.

“It’s terribly painful,” the fourth-generation entrepreneur says from her desk behind the counter of the company her great grandfather started from scratch in 1943. “This topic of gas drilling comes up at every event and every conversation, and everybody has an opinion. It’s really dividing our community.”

Hints of discord have even penetrated very close to home. At family dinners, she now avoids any talk about drilling with her father and mother-in-law — both of whom have signed leases with gas companies.

McNamara knows her observations aren’t unique. Plenty of newcomers and longtime residents are equally aggrieved by the “us versus them” attitude that has pierced this settlement of barely 1,600 souls.

They wince at the tight-lipped smiles, hear every awkward silence. The tension is fierce and palpable enough that handfuls whisper about leaving. Several have already packed their bags.

Those staying put are voting with their feet. They refuse to spend dollars at restaurants and other businesses they see catering to drilling proponents.

No doubt, the lure of steady lease and royalty payments from gas companies is appealing in an economically starved section of the Appalachian Mountains that counts mainly on agriculture and tourism to pay the bills.

What some see as an opportunity for a financial bonanza, however, scares others who think this hunt for America’s energy future is jeopardizing the air they breathe, the water they drink and a rural landscape that has long been a draw for those seeking an escape from urban chaos, and is on the verge of transforming into a haven for small-scale organic farmers.

“A lot of people say, ‘Where would we be without the gas companies to carry us through this last recession?'” McNamara says. “Well I think we would have been fine. We’re not so poorly off that we have to turn over all of our resources to drillers.”

McNamara speaks longingly about how she wishes she had been more outspoken with her anti-drilling message several years ago when companies such as Houston-based Cabot Oil & Gas Corp., which also has an office in Pittsburgh, began courting Susquehanna County.

That’s exactly what Nadia Steinzor is trying to ferret out.

Armed with oodles of experience in communications and outreach, the grassroots organizer has spent the last couple of years traveling in Pennsylvania and the five other Appalachian Basin states — New York, Maryland, Ohio, West Virginia and Virginia — where mere mention of extracting a bountiful resource from the Marcellus Shale formation can ignite a firestorm. The natural gas is being harvested from a yawning sheath of sedimentary rock formed around 400 million years ago during what scientists label the Devonian Period.

Steinzor has watched firsthand as the industry’s promise of prosperity has cleaved communities and frayed the fabric that traditionally binds small towns such as Montrose together. She’s not at all surprised that frazzled residents feel as if they are living at the epicenter of an energy earthquake.

“People want to feel as if they are in control of the economic fate of their community, and in places such as Montrose they don’t,” says Steinzor, now employed by the advocacy group Earthworks. “They feel powerless. To be told it’s your patriotic duty to extract natural gas to meet the nation’s energy needs doesn’t sit very well with people.”

With the “act now and plan later” mantra adopted by regulators and the industry in the Keystone State, she emphasizes, it’s only natural that Pennsylvanians are so splintered.

“This is all proceeding without a plan,” Steinzor continues, adding that blaming the naysayers is a cop out. “It’s not that people at the local level are unwilling to accept change. It’s because nobody was willing to sit still long enough to let people figure out if massive-scale industrial development could be done without public health, environmental and psychological damage.”

The tremendous rush to drill meant communities never had the chance to engage in difficult but necessary conversations and debates about the effects of large-scale energy extraction.

Unlike other parts of Pennsylvania, Steinzor notes, places such as Susquehanna County are rookies when it comes to familiarity with any sort of drilling. Cabot drilled its first well there in 2006. Instead of only hearing about how their wallets would be filled, residents needed detailed A to Z lessons in hydraulic fracturing so they could rationally assess whether investing would be a boon or a boondoggle.

“It’s no wonder people feel as if they are under siege,” emphasizes Steinzor, who has earned an undergraduate degree in international relations and a master’s in environmental policy. “I’m finding people just want it to stop so they can catch their breath. There is no end in sight and nobody knows where this is headed.”

Lynn Senick felt like a voice in the wilderness three years ago when she created an online natural gas forum geared for Susquehanna County. Registrants could voice their concerns, exchange information and learn what was erupting in their own backyard. Membership has blossomed to at least 240 participants since its start.

Too many county residents, she maintains, signed leases quickly without asking questions about safety and short- and long-term repercussions.

“I don’t understand why people in this community think there’s nothing they can do about this,” says Senick, who labels herself as an educator, not an activist. “You might as well do what you can.”

“I’ve become obsessed with gas drilling,” she adds with a sly smile, while seated on the couch in her Montrose living room. “I know way more than any layperson should know about it.”

More than two decades ago, Senick and her family fled Philadelphia for the rural refuge of a 15-acre “farmette” in Susquehanna County. She and her husband knew they were moving their four young children to a conservative, somewhat insular region where outspokenness is frowned upon, but they figured the tradeoff for fresh food, clean air and water was worth it.

Senick moved to Montrose after her children grew up. Now, the 54-year-old can’t bear to visit the land she left behind because the surrounding countryside is pockmarked with drilling rigs and their abundant accompanying infrastructure.

“They are talking about the possibility of hundreds, maybe even thousands of wells here,” she says with grimace. “It’s a nightmare.” 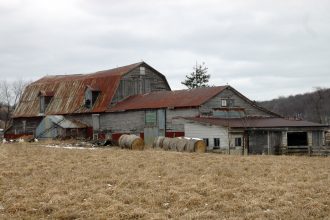 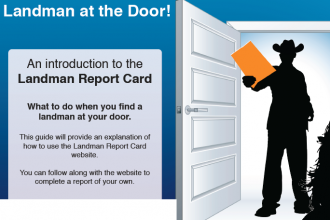