What began as a narrow jurisdictional question to be argued Tuesday before the U.S. Supreme Court in a climate change lawsuit filed by the city of Baltimore could take on far greater implications if the high court agrees with major oil companies to expand its purview and consider whether federal, rather than state courts, are the appropriate venue for the city’s case and possibly a host of similar lawsuits.

The high court initially agreed to hear a request by the oil and gas industry to review a ruling by the Fourth U.S. Circuit Court of Appeals in which the court affirmed a federal district judge’s decision to allow Baltimore’s lawsuit to be tried in state, rather than federal, court based on a single jurisdiction rule.

The city is seeking damages related to climate-induced extreme weather—stronger hurricanes, greater flooding and sea-level rise—linked to oil and gas consumption that warms the planet. Baltimore’s attorneys argue that state court is the appropriate venue for such monetary awards.

But after the Supreme Court agreed to take on that narrow question, Exxon, Chevron, Shell and other oil companies went further in court filings and are now pressing the court to consider the much larger and consequential question of whether state courts have jurisdiction over these lawsuits at all.

The stakes could be enormous if Baltimore becomes a test case for 23 other city, county and state governments that have filed similar climate change lawsuits seeking damages. It’s not clear whether the court will address that more significant question, though legal experts say it is up for grabs.

Since the first of those lawsuits was filed in 2017, the localities have for the most part wanted their cases heard in state court as matters in which they could seek compensation from oil and gas companies for damages to public lands, buildings,infrastructure like roads and bridges; as well as for the cost of mitigation measures.

Oil and gas companies, on the other hand, have wanted the cases argued before federal courts, where they had prevailed in earlier lawsuits that focused not on physical damages caused by extreme weather, but on considerations related to greenhouse gas emissions under the federal Clean Air Act.

Ultimately, the fossil fuel industry is hoping the Supreme Court itself will agree with its overarching argument that a global issue like climate change cannot be litigated in the courts and that, in any event, oil and gas companies should not be penalized for lawfully providing the fuel necessary to power the nation’s economy.

Legal scholars have long believed these broader issues related to climate change would end up before the high court, where industry lawyers now hope the new 6 to 3 conservative majority would see the matter the way they do.

It remains to be seen whether the Baltimore case is decided on the narrow matter first brought to the court, or becomes the broader test case lawyers on both sides have long anticipated. A ruling by the court could take months.

The fossil fuel industry, in its written arguments, reminded the court that it has long made it clear that lawsuits seeking redress from “inter-state air pollution” are governed by federal, not state, law.

Attorneys for Baltimore and some legal scholars say that’s essentially the industry attempting to “smuggle” the case into federal court based on factors not raised in the industry’s original appeal to the Supreme Court.

Baltimore’s lawyers, who raised no claims in their lawsuit related to air pollution, countered that the court would have to engage in “a sweeping act of judicial lawmaking” at odds with long-standing federal doctrine vesting states with regulatory authority if it moved the case to federal court.

Larry Ebner, an attorney for the Atlantic Legal Foundation, an organization promoting free enterprise that filed a friend of the court brief supporting the oil and gas industry, said that the case is not just about the scope of appellate review.

“The more fundamental question is whether climate-change tort suits belong in the federal court system, or in 50 separate and different state court systems,” he said.

“The city cannot pretend that its climate change allegations are local in nature. The city’s alleged causes of action are unavoidably nationwide or global in scope.”

Pat Parenteau, a professor of environmental law at the Vermont Law School, said he thinks it is likely that the court will choose to go beyond the narrow issue of whether the Fourth Circuit ruled correctly in upholding a district judge’s finding that Baltimore’s case belongs in state court.

“The court isn’t going to be satisfied with parsing the rather technical issue presented,” Parenteau said. The justices “are going to want to get their minds around what’s coming down the road; where all of this is this heading.”

Lisa Heinzerling, a professor of law at Georgetown University who specializes in environmental and natural resources law, said it would be worrisome if the court strayed beyond the limited question it agreed to review.

A move by the high court to broaden the matter, she said, would be hard to understand, “unless it wants to send an aggressive and unfavorable message about the legal basis of all of these lawsuits.”

Richard Frank, director of the California Environmental Law and Policy Center at the University of California, Davis, and a former deputy California attorney general, said a ruling in favor of Baltimore could lead the energy companies to reexamine their legal strategies and financial liability, and maybe even lead them into settlement talks.

“On the other end of the spectrum,” he said, “if the Supreme Court accepts the invitation to decide there is no role for state common law—that really undercuts substantially the viability of cases across the country.”

Battle lines have clearly been drawn.

Democrat attorneys general representing 19 states, including California and New York; and the District of Columbia, have weighed in on behalf of Baltimore.

To date, 24 jurisdictions have filed suits seeking to collect damages related to climate change. The first round of cases was filed three years ago by five cities and three counties in California.

Those cases were followed in quick succession by lawsuits in Colorado, New York City, Baltimore, Kings County in Washington state, the state of Rhode Island and the Pacific Coast Federation of Fishermen’s Associations.

Most recently, Minnesota, Connecticut and Delaware have filed climate lawsuits, as have Hoboken, New Jersey; Charleston, South Carolina, and Maui and Honolulu, Hawaii.

In addition to the 19 Democratic attorneys general, six Democratic senators have filed an amicus brief in support of Baltimore’s claims. They called the industry’s attempt to convince the court to restrict the cases to federal court a “gambit” intended to “block progress on addressing climate change.”

“The  fossil  fuel  industry  has  tried  to  close  every  door—local,  state,  federal;  legal,  legislative,  and  administrative—to  a  solution  to  the  climate  crisis,” the senators said in their statement to the Supreme Court.

Republican attorneys general representing 13 states, including Texas and Ohio, have filed amicus briefs championing the industry, as has the Trump administration.

The Republican attorneys general argue that if the climate lawsuits proceed in state, rather than federal, courts, it could create significant conflicts with federal government policy.

“State courts have no business deciding how global climate change should be addressed and who—among all the countless actors around the world whose conduct contributes to it—bears legal responsibility for creating it. In addition to the obvious potential for gross unfairness, such state court created common law rules would inevitably present a ‘significant conflict’ with  federal  policy,” according to the Republican’s amicus brief.

The case has also pitted big business against environmental organizations.

Industry boosters include the American Petroleum Institute, the National Association of Manufacturers and the U.S. Chamber of Commerce.

“The policy this litigation seeks to drive through state courts impacts a multitude of national interests including energy independence, stability of America’s electric grid, and affordability for families and businesses across the country, in addition to climate impacts,” the manufacturer’s association said in its brief. “Such complex policy matters should not be driven by individual state judges in individual state courtrooms applying (or misapplying) various state liability laws.”

The Natural Resources Defense Council and the Chesapeake Bay Foundation, environmental organizations that embrace the scientific fact of climate change, have called out what they consider an end run around the states by the fossil fuel industry.

“Maryland has the right and the responsibility to protect the health, safety, and welfare of its residents, and respondent has every right to pursue available state law causes to address localized injuries caused by petitioners’ allegedly deceptive  conduct,” the organizations said in their brief. 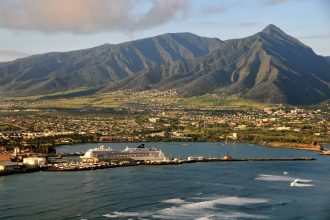 Maui Has Begun the Process of Managed Retreat. It Wants Big Oil to Pay the Cost of Sea Level Rise.