The coronavirus pandemic has highlighted the need for rigorous science, demonstrating—in realtime—what the consequences can be when world leaders pay inadequate attention to what that science says. In his response to COVID-19, Presdient Donald Trump has made statements that ignore, question or distort mainstream science. But long before the virus arrived—even before he became president—he was using similar techniques to deny climate change. Here are some examples:

“[Coronavirus is] going to disappear. One day—it’s like a miracle—it will disappear.”

Robert Redfield, director of the Centers for Disease Control and Prevention, said in an interview on CNN that the virus was likely here to stay, possibly for months.

The scientific consensus is clear that global warming is happening and is a threat to the planet; The New York Times illustrates the basics of global warming and climate change here.

“Now, the virus that we’re talking about having to do—you know, a lot of people think that goes away in April with the heat—as the heat comes in. Typically, that will go away in April. We’re in great shape though.”

Some coronaviruses are seasonal. But scientists still don’t know whether the virus that causes COVID-19 will be. Findings of a recent study suggest that the virus is spreading most readily in cooler temperature zones, The Washington Post reports; however, the study does not conclude from that evidence that the virus will be significantly reduced in the summer.

“You know, I actually heard the other day, some pretty good politician. I’ve seen him around for a long time. Nice white hair. Everything is like central casting. You could put the guy in a movie. He was talking. I don’t know if he believes this—but he was a Democrat—he said, ‘We have 11 years.’ It’s the first time I’ve heard it; I heard 12. But now, see, it’s been a year, so now they think we have 11 years to live. I don’t know, folks. I think these people have gone totally loco.”

The Intergovernmental Panel on Climate Change issued a report in 2018 that said global carbon emissions would need to be cut by 45 percent by 2030 to keep temperatures below 1.5 degrees Celsius. This does not mean we have 11 years to live, as Trump asserted, but rather 11 years to shift energy production away from fossil fuels to keep warming within the goals of the Paris accord.

Contrary to Trump’s assertion, patients and health care workers were complaining that they could not get access to coronavirus tests. A few days later, testifying to a House committee, Dr. Anthony Fauci, director of the National Institute of Allergy and Infectious Diseases, acknowledged tests were not yet widely available. “The idea of anybody getting it easily the way people in other countries are doing it—we’re not set up for that,” he said.

In September, 2019, Trump showed the press an image of Dorian’s projected trajectory that had apparently been altered using a Sharpie to include Alabama in the path of the storm.

Earlier, Trump had tweeted that Alabama would probably be hit by Hurricane Dorian. The National Weather Service in Birmingham, Alabama, then contradicted the president with a tweet saying Alabama was not at risk. Trump used the altered image a few days later.

“I always treated the Chinese Virus very seriously, and have done a very good job from the beginning, including my very early decision to close the ‘borders’ from China—against the wishes of almost all. Many lives were saved. The Fake News new narrative is disgraceful & false!”

Trump has been urged to stop calling COVID-19 the “Chinese Virus,” a term he has used repeatedly and that some have called racist and dangerous. And many public health experts have criticized the administration’s lack of preparation and failure to act quickly when the virus was first recognized.

“The concept of global warming was created by and for the Chinese in order to make U.S. manufacturing non-competitive.”

There is a widespread scientific consensus about the reality of human-driven global warming.

By this time, the U.S. had confirmed 60 cases of coronavirus. The CDC had already warned the public to prepare for the virus to spread, assuring them that this was not a hoax.

“Over 100 Democrats have signed up to support the $100 trillion Green New Deal. That’s a beauty. No more cows. No more planes. I guess, no more people, right?”

A Washington Post fact check shows that the Green New Deal resolution supported by most Democrats did not include mention of halting air travel or doing away with cows.

Nov. 26, 2018, Commenting to reporters on the Intergovernmental Panel on Climate Change report saying climate change would hurt the economy.

The report, produced by climate experts and Trump’s own administration, said climate change would damage the economy.

This photo was taken during a press conference on the coronavirus. Trump is seen shaking hands with Walgreens president Richard Ashworth, despite CDC warnings that shaking hands can spread the virus and recommending elbow bumps instead. 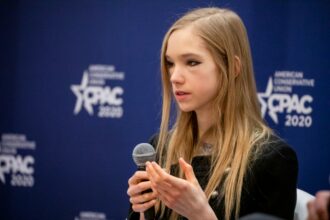 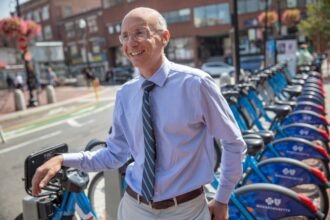