All life on Earth evolved from microorganisms in the primordial slime, and billions of years later, the planet’s smallest life forms—including bacteria, plankton and viruses—are still fundamental to the biosphere. They cycle minerals and nutrients through soil, water and the atmosphere. They help grow and digest the food we eat. Without microbes, life as we know it wouldn’t exist.

Now, global warming is supercharging some microbial cycles on a scale big enough to trigger damaging climate feedback loops, research is showing. Bacteria are feasting on more organic material and produce extra carbon dioxide as the planet warms. In the Arctic, a spreading carpet of algae is soaking up more of the sun’s summer rays, speeding melting of the ice.

So many documented changes, along with other alarming microbial red flags, have drawn a warning from a group of 30 microbiologists, published Tuesday as a “consensus statement” in the journal Nature Reviews Microbiology.

The microbiologists, in their statement, warned about changes they’re already seeing and called for more research to understand the potential impact. The statement “puts humanity on notice that the impact of climate change will depend heavily on responses of microorganisms, which are essential for achieving an environmentally sustainable future,” they wrote.

“Microbes literally support all life on Earth,” said Tom Crowther, an environmental scientist with ETH Zürich, who was among the signers of the statement. “Maintaining and preserving these incredible communities has to be our highest priority if we intend to maintain the existence that we want on this planet.”

His research has showed that accelerated microbial activity in soils will significantly increase carbon emissions by 2050. In another study, he showed how global warming favors fungi that quickly break down dead wood and leaves and release CO2 to the atmosphere.

A better understanding of the dynamics would not only help make better global warming projections, but that knowledge also is integral to efforts to reduce CO2 levels in the atmosphere with climate-friendly soils, forest and agriculture, said University of Vermont climate researcher Aimée Classen.

“We know microbes are important for the way the way plants grow,” she said. “Can we harness some of that to help plants be more resistant to changing climate and to sequester more carbon in the soil?”

It’s a Health Issue, Too

There are beneficial microbes, and there are pathogens that are deadly to plants and animals. Global warming is making it easier for some of those killers to spread, reproduce and persist in the environment, said Matthew Baylis, a health researcher at the University of Liverpool who joined the consensus statement.

“We’re seeing a remarkable rate of emergence with new and spreading diseases that are affecting our food production, plants and animals, and our own health,” he said.

It’s not all due to climate change. Some of the spread of disease is simply due to people moving around more and moving plants from place to place in commerce and agriculture.

But there is compelling scientific evidence that global warming has brought malaria to higher elevations in Africa even as its being eradicated in other places, and that it has enabled the spread of bluetongue, a livestock disease that affects sheep, Baylis said.

Millions more people will face the risks of these diseases as the climate warms, he said.

“As the environment warms, pathogens can proliferate in new habitats that were previously too cold, and thereby infect humans in these new habitats,” said Kenneth Timmis, an environmental microbiologist at the Technical University Braunschweig, Germany.

Warming oceans are also changing currents and extreme events like El Niño, which disperses pathogens to new habitats where they cause disease, Timmis said. “This is the case for Vibrio, the cause of cholera and related diseases, of which there has been a series of outbreaks in recent years. In general, water-borne infections increase with increasing temperature,” he said.

Charges are also being documented in the Southern Ocean around Antarctica, where marine microplankton take in some 40 percent of all the carbon sequestered by all the oceans and sink it to the seafloor, partly mitigating the buildup of greenhouse gases.

About 90 percent of the world’s ocean biomass is microbial, making it a thick, living soup at a microscopic scale, and global warming brewing up some biological storms with as-yet unknown consequences, said Antje Boetius, a marine microbiologist at the Max Planck Institute in Germany.

The widely reported extreme low Arctic sea ice extent in the summer of 2012 rippled through the ocean’s ecosystems. Huge amounts of microbial life, in the form of diatoms floating in sea ice east of Greenland drifted to the bottom. Boetius said she measured a noticeable change in ocean chemistry as the dead diatoms and associated bacteria piled up at the bottom of the ocean. The research didn’t trace a direct link to harm to marine animals, but it showed how sudden and dramatic extreme climate events can be.

“In the very deep sea, which everyone thinks is protected, we see the velocity of climate change,” she said.

The breeding and feeding cycles of many other Arctic species are closely linked to the timing and location of plankton blooms, so a disruption of the ocean microbe cycles can fundamentally affect the whole food chain, from birds to whales.

Boetius also warned of other tipping points that haven’t been studied yet, including the erosion of organic permafrost soil to the ocean, where aquatic bacteria could digest the material and release huge amounts of methane and CO2 to the air, as well as a potential increase in toxic algae blooms in the Arctic, where they are now still uncommon.

“For everyone that studies ocean microbiology,” she said, “it’s really scary.” 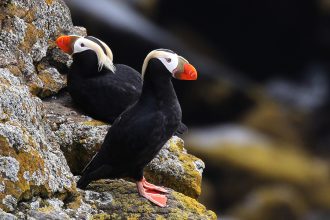 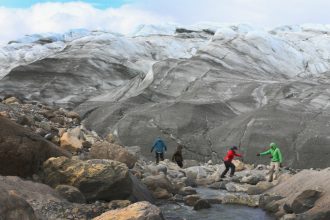