In the wake of helping defeat two recent ballot measures that could have reined in fracking in Colorado, the state’s oil and gas industry is leading a campaign to sharply limit future citizen initiatives.

A so-called Raise the Bar question will be asked on the Colorado ballot on Nov. 8. It is being promoted as a way to make the controversial process of amending the state constitution more fair. But as the proponents’ motto implies, Amendment 71 would increase the hurdles for citizen activists seeking to change Colorado’s constitution through ballot initiatives. And with the energy industry contributing 74 percent of the $4.2 million raised for the Raise the Bar drive, fracking foes say it is clear that one goal is to stop any citizen effort to bring drilling regulation questions to the voters.

“Basically what oil and gas is trying to do is shut down any future initiatives on oil and gas,” says Kaye Fissinger, president of Our Health, Our Future, Our Longmont, one of the citizen groups behind  the failed effort to get anti-fracking measures on this year’s ballot.

But Doug Flanders, spokesman for the Colorado Oil & Gas Association, said, “This is a much larger business community effort than just oil and gas. It’s about protecting the constitution for those issues that are constitutional-worthy.” Flanders said his group has joined with an array of businesses concerned about constitutional amendments aimed at issues better dealt with in land-use code or other statutes and regulations.

Indeed, Amendment 71 would have implications far beyond fracking; and it has attracted a diverse group of supporters as well as opponents from both the left and the right side of the political spectrum. The Raise the Bar coalition says the measure would provide a long-needed curb on special interests from both parties using the initiative process to amend the state constitution. Gov. John Hickenlooper and all four living former governors, both Democrats and Republicans, support Amendment 71. The measure has been endorsed by business groups in banking, real estate, agriculture and others, as well as  the American Association for Retired Persons and by Denver software entrepreneur and LGBT activist Tom Gill.

Hickenlooper said in an interview with a Denver television station that citizens still would be able to change the constitution under Amendment 71, “but only for large, important things, not for putting a lot of details into it.

But Amendment 71 opponents say the measure would simply make the voter initiative process too expensive for all but the wealthiest interests. Instead of the current requirement that petitioners get signatures from 5 percent of the state’s voters (based on votes cast in the most recent election), Amendment 71 would require signatures from 2 percent of all registered voters in each of the state’s 35 Senate districts.

In addition, it would require a 55 percent majority, instead of a simple majority, for a constitutional referendum to become law. That’s a tough bar in a state closely divided politically. Colorado’s voter-initiated renewable energy law—the first in the nation—passed in 2004 with only 53 percent of the vote. Florida requires that constitutional amendments receive 60 percent of the vote; some states set other special conditions for passage beyond a simple majority vote.

“We believe this amendment would stack the deck for special interests and allow them and the political elite to be gatekeepers of public policy,” said Jessica Goad, spokesperson for Conservation Colorado. “It’s not just about oil and gas. It’s about mining, or transportation. It would make it so that special interests with unlimited funding can change policy far more easily than grassroots citizens groups can do.”

Other opponents range from Common Cause to Planned Parenthood to the libertarian Independence Institute.

Colorado is one of 24 states with a voter initiative process, and the state takes pride in its history at the vanguard of the direct democracy movement. Colorado was the first state to pass a referendum on women’s suffrage in 1893, 27 years before the 19th Amendment to the U.S. Constitution. And it was by citizen-initiated constitutional amendment in 2012 that Colorado became the first state to legalize recreational use of marijuana.

But citizen-driven constitutional amendments also have created headaches. In 1992, voters approved an initiative that prohibited recognition of homosexuals as a protected class, which the U.S. Supreme Court struck down as unconstitutional four years later. Another 1992 voter-approved constitutional amendment, the Taxpayers’ Bill of Rights, known as TABOR, complicates Colorado fiscal policy by requiring voter approval for every new state or local tax.

In addition to Amendment 71, Colorado voters this November will be asked to vote on constitutional amendments increasing Colorado’s minimum wage, levying a new tobacco tax and instituting a single-payer health care system.

Colorado is the only state where it is as easy for citizens to change the constitution—the state’s highest law and foundational document—as it is to change a law, the Raise the Bar coalition says. Although comparisons are difficult because each state’s constitutional amendment process is unique, Colorado’s is “at the easier end of the spectrum,” says Wendy Underhill, elections program manager for the National Conference of State Legislatures.

California, for instance, requires 60 percent more signatures for a constitutional amendment than for a statute. Ten other states have some sort of geographic requirement, but Amendment 71 would make Colorado’s constitution one of the most difficult to change by voter initiative, said Paul Jacob, president of Citizens in Charge, a direct democracy advocacy group.

Anti-fracking activists said the expense of deploying canvassers across the Rocky Mountains would make grassroots petition drives prohibitive. “It would pretty much shut down citizen-driven democracy in this state,” Fissinger said

Her group and others faced an uphill climb this year obtaining 98,492 signatures they needed for anti-fracking ballot initiatives. Those would have given local governments more control over drilling and required that oil and gas activities be set back 2,500 feet from homes, schools and other buildings. Colorado’s Oil and Gas Conservation Commission concluded that the provision would put more than 90 percent of the surface area of the state off-limits to drilling.

The activists faced a fierce “Decline to Sign” drive funded by the oil and gas industry, which had amassed $14 million to fight the referendums. In the end, the Colorado Secretary of State’s office said anti-fracking activists had not gathered enough valid signatures to qualify the measures for the ballot.

Flanders of the Colorado Oil & Gas Association, said that the anti-fracking measures were like a number of other recent proposed constitutional amendments. “They are bumper sticker ideas that don’t have much support,” he said, adding that if the measure appeals to enough voters, funding would follow. “If an idea doesn’t have support, you can’t blame funding for your failures.”

Ten days after the anti-fracking measures failed, the oil and gas industry campaign committee, Protecting Colorado’s Environment, Economy and Energy Independence, amended its registration to change its purpose to support of  Amendment 71. That day, it contributed $1 million to Raise the Bar, and followed up with another $1 million two weeks later. Altogether, the oil and gas industry has contributed $3.1 million to the campaign, most of it in the past six weeks.

More than 100 ballot measures have been put before Colorado’s voters since 1996, more than 60 percent of which have been defeated, according to Ballotpedia. Numerous blue ribbon panels and academic committees have urged reform of Colorado’s constitutional amendment process, and even many opponents of Amendment 71 agree that there’s a need for change. Activists often choose a constitutional amendment to affect change, because voter referendums can be overturned by the legislature.

But the geographic requirement in Amendment 71 would give any state Senate district veto power over citizen initiative proposals, said Scott Wasserman, president of the Bell Policy Center, a Denver-based progressive advocacy group. “It’s very hard to gather signatures, and it’s very easy to run a ‘Decline to Sign’ campaign in a couple of districts.”

Flanders, however, said it’s the current law that gives certain geographic areas disproportionate power. Noting that 75 percent of the signatures on the failed anti-fracking measures came from the cities of Denver and Boulder, he said, “You can put something on the ballot that affects the whole state by just going to two or three locations in a state with your petition.”

For Colorado’s anti-fracking activists, passage of Amendment 71 would be another setback in what already has been a tough year. Some of the nation’s first local bans on fracking were enacted in Colorado, but these were dealt a decisive blow when the State Supreme Court ruled in May that the local ordinances were preempted—in effect, prohibited—by state law. It was opposite to the decision reached by New York’s highest court, which ruled in 2014 that towns could prohibit fracking with zoning ordinances; under New York’s constitution, the court said, laws for the “health, safety, morals, or the general welfare of the community” were “one of the core powers of local governance.”

Colorado activists had hoped to change their state law through constitutional amendment.

Their effort this year followed a bitter defeat in 2014, when two ballot initiatives were taken off the board after a last-minute political deal between Hickenlooper and the initiative’s main sponsor, Democratic Congressman Jared Polis. That twist led to a deep mistrust of Hickenlooper and other Democratic lawmakers by some anti-fracking activists.

As Colorado oil production nearly tripled from 2010 to 2015, and gas production increased 7 percent, the state’s elected officials have passed some safeguards. Colorado was one of the first states to require disclosure of fracking chemicals and in 2014, the state adopted the first regulations to control methane leakage at oil and gas production sites. But communities have not been successful in gaining support from either party in the Denver statehouse for their efforts to bar fracking altogether from some areas.

“They can crow all they want about having the toughest regs in the country,” says Josh Joswick, an anti-fracking community organizer in Durango. Joswick, a former county commissioner in La Plata County, said he used to believe that a higher bar was needed for constitutional amendments in Colorado, but his involvement in the fracking fight made him change his mind.

“When you have a legislature and a governor that are so pro-development, and not wanting to have anything to do with oversight, the system is so rigged against any kind of change that it is the only thing that people have left,” he said. 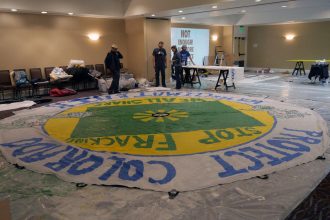 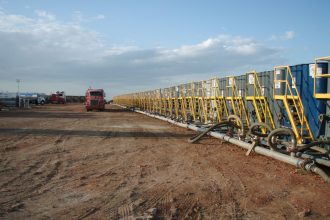 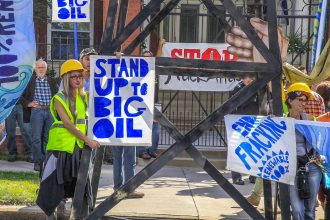