A federal appeals court ordered a halt last Friday to construction of the Dakota Access pipeline near the Missouri River just upstream from the Standing Rock reservation in North Dakota. It is the latest in a series of recent decisions by federal agencies and courts concerning the future of Dakota Access, a proposed pipeline that would transport crude oil nearly 1,200 miles from North Dakota to Iowa.

The rulings have thrown some hurdles into the path of the pipeline following an extended protest by the Standing Rock Sioux and other tribes that have joined their efforts. Here is a guide to the latest judicial and executive actions and what they mean for the future of the pipeline:

Q: What effect does Friday’s court order have on construction?

A: The order by the U.S. Court of Appeals for the District of Columbia halts construction for 20 miles on each side of the Missouri River at Lake Oahe, where the proposed route crosses near the Standing Rock reservation. The stoppage may only last a few days. Friday’s administrative injunction is in effect until the court can rule on a preliminary injunction anticipated this week.

The court said Friday’s ruling “should not be construed in any way” as an indication of its preliminary injunction ruling. Janice Rogers Brown, one of three judges hearing the case, indicated in Friday’s court order that she would rule against the subsequent injunction.

Q: Why is the tribe seeking to halt construction?

A: The Standing Rock Sioux wants to prevent pipeline company Energy Transfer Partners from further disturbing what it considers to be sacred sites west of the Missouri river. Demonstrators clashed with security crews with guard dogs earlier this month after entering an active construction site where some of those burial and other sacred sites had been identified.

The tribe also fears for the safety of its drinking water, with the pipeline set to cross under the Missouri River upstream of its water intake pipes. The initial route had the pipeline passing just upstream of the state capital Bismarck before the company changed it and the Army Corps of Engineers approved it this summer.

Q: How much of the pipeline has already been built?

Q: How does the court order differ from the Obama administration’s ruling?

A: The court order codifies into law a request by the Obama administration for a stoppage along the same 40-mile swath of the pipeline. On Sept. 9, the administration asked Energy Transfer Partners  to “voluntarily pause all construction activity within 20 miles east or west of Lake Oahe,” in a joint statement by the Justice Department, Interior Department and the U.S. Army.

The announcement also stated that the Army Corps of Engineers would not grant a final permit for construction of the pipeline bordering or beneath lake Oahe on Army Corps land until it can determine “whether it will need to reconsider any of its previous decisions regarding the Lake Oahe site under the National Environmental Policy Act (NEPA) or other federal laws.”

Q: What comes next in the measures outlined in the administration’s announcement?

A: The Army Corps will now reassess its permit for the pipeline’s crossing of the Missouri River at Lake Oahe. Representatives from tribes across the country will be invited to take part in formal government-to-government consultations with the three government agencies in the coming months. They will also discuss how to ensure meaningful tribal input on other infrastructure projects that may impact tribal lands, resources or treaty rights.

Q: What other lawsuits have been filed against the pipeline?

The Yankton Sioux tribe of South Dakota filed a lawsuit on Sept. 8 against the Army Corps and the U.S. Fish and Wildlife Service for allowing the Dakota Access oil pipeline to go through without a full environmental impact study. The lawsuit says the pipeline’s route passes through the tribe’s treaty lands and that construction will destroy important cultural sites. 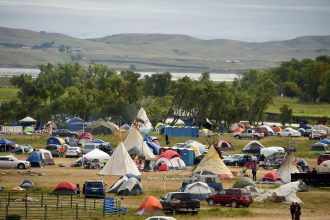 Obama Admin: Dakota Pipeline 'Will Not Go Forward At This Time' 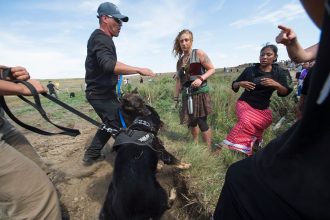