American efforts to curb climate change have long avoided measures that would rein in the production of oil and gas, instead relying on reducing consumption of fossil fuels in power plants and automobiles. This dichotomy allowed the nation to catapult into place as the world’s top oil and gas producer, even as domestic greenhouse gas emissions declined.

But that era may have come to an end with the inauguration of President Joe Biden, who on his first day in office took sweeping executive action signaling that he will scrutinize fossil fuel infrastructure and block development that doesn’t help the nation move towards an emissions-free future.

Those actions include rejecting a presidential permit for the Keystone XL pipeline; placing a moratorium on oil and gas development in the Arctic National Wildlife Refuge; and directing federal agencies to review more than a dozen regulations and other actions by the Trump administration aimed at increasing fossil fuel production.

The cancelation of the Keystone XL pipeline seems fitting: It was first rejected by the Obama administration, only to be revived by former President Donald Trump. The decade-long fight against the pipeline helped reshape the environmental movement and turn the focus of activism toward specific pieces of infrastructure as part of a movement to keep oil, gas and coal in the ground.

“We were seen as extreme and radical, and there was this sense that we could build our way out of climate change with just more wind and solar while we allow fossil fuel projects to continue to be developed,” said Jane Kleeb, founder of the advocacy group Bold Alliance and one of the ringleaders of the fight against Keystone XL, which would have connected Canada’s oil sands to the Gulf Coast. Kleeb is now also the chair of the Nebraska Democratic Party, and she said Biden’s decision to cancel the project’s permit on his first day in office “is a very clear indication that the old-school thinking around climate change and clean energy is really out the window.”

The Keystone XL battle was also one of the first to broaden the environmental movement beyond mostly white and expert voices to include those of Indigenous groups and rural farmers, a strategy that has since spread widely. The Gwich’in people of northern Alaska have played a central role in the fight against drilling in the Arctic National Wildlife Refuge. Indigenous groups have also led opposition to the Dakota Access Pipeline and the Line 3 pipeline, two projects that may now draw scrutiny from the Biden administration.

“That for me is the biggest lesson coming out of Keystone XL, other than being stubborn as hell, which we were,” Kleeb said. “This completely changed politics as usual for climate change fights.”

The direct impact of Biden’s executive actions on oil development may be less dramatic than the signals they send, in large part because market forces have already pushed against Keystone XL and drilling in the Arctic refuge. While the cancelation of the pipeline is likely to discourage new investment in Canada’s oil sands—a relatively polluting source of oil also known as tar sands—a decline in financing has been underway for years.

Tar sands development requires large up-front investments that take decades to pay-off, so they are viewed by many analysts as some of the least likely to proceed if global oil demand begins to decline, as it is widely expected to by the end of this decade. Activists’ efforts to block or delay construction of the Keystone XL and other pipeline projects have also constrained the oil sands industry’s ability to ship its oil to refineries in the United States or overseas. Both these factors have led many multinational oil companies and some banks to sell off assets or swear off new investments, and there have been no new major projects announced in years.

Despite the Trump administration’s efforts to push through the Keystone XL project, it continued to face legal challenges over its permits and a federal judge issued an order blocking most construction. The project faced enough legal and financial uncertainty that last year, the provincial government of Alberta, where Canada’s oil sands are located, announced it would invest more than $1 billion in the project and provide billions more in loan guarantees to ensure that it was built.

Many activists and some economists have argued that, based on these developments, the pipeline was no longer necessary in any future that complied with the goal of the Paris climate agreement to limit warming to well below 2 degrees Celsius.

The Trump administration’s drive to drill in the Arctic refuge also has been undermined by the collapse of the market. The Biden moratorium should halt any further actions on a lease sale that was rushed through in the final weeks of the Trump administration, said Corey Himrod, a spokesman for the Alaska Wilderness League.

But again, it’s unclear whether much development would have occurred anyway. The sale drew hardly any interest from the oil industry—the top bidder was not even an oil company, but an Alaska state agency. Many of the world’s largest banks have said they would not finance any development in the refuge. In its final days, the Trump administration issued a rule that attempted to force those banks to lend anyway, but Biden is likely to review that rule and some analysts have said it is unworkable.

Biden also directed federal agencies to review a slew of other Trump administration actions that aimed to speed fossil fuel development, including regulations covering drilling and hydraulic fracturing on federal lands and offshore, a major oil development in a separate part of northern Alaska, management plans that allowed drilling on millions of acres of protected greater sage-grouse habitat and new rules allowing the shipment of liquefied natural gas by rail.

“What we saw over the last several months of the Trump administration was a sort of joint panic from industry and then from the Trump administration in government to try to do whatever they could do to give industry a longer-term footing for future projects,” said Robert Schuwerk, North America executive director for the Carbon Tracker Initiative, a financial and climate think tank. But without a stronger economic case for development, he said, “no amount of prodding from the government can really be effective.”

TC Energy, the company behind Keystone XL, issued a statement Wednesday saying that it would halt operations for the project, which it said would result in the loss of thousands of union jobs, and that the company would “consider its options.”

On Sunday, after the first news reports that Biden planned to immediately cancel the project, Alberta Premier Jason Kenney issued a statement warning the move would cost jobs in both countries and that the province “will work with TC Energy to use all legal avenues available to protect its interest in the project.”

That could include a case under the two nations’ free trade agreement seeking compensation for some of the investment that TC Energy and Alberta have already put into building large sections of the project in Canada and parts of the United States. The company began such an effort after the Obama administration blocked the project in 2015.

Anthony Swift, director of the Canada Project at the Natural Resources Defense Council, said any case would be weak, however, because the project had not secured all the permits it needed to complete construction in the United States.

Bigger battles may lie ahead over the Dakota Access Pipeline—already operating under permits that have been challenged in court—the Line 3 pipeline and several natural gas expansion projects. The Canadian company Enbridge has recently begun work to replace the existing Line 3, which carries oil from the tar sands into the United States.

“We should take a moment to celebrate our victories,” said Dallas Goldtooth, the Keep It In The Ground Campaign organizer for the Indigenous Environmental Network. But he added, “I do not accept one action, even though it’s a significant action on Keystone XL, as a victory for our struggle.”

Goldtooth said his group and others will press the Biden administration to reject permits for the Dakota Access and Line 3 pipelines, and to enact a ban on oil and gas exports and on leasing on federal lands.

The oil industry is sure to fight those efforts, should Biden pursue them. In a speech last week outlining annual priorities, Mike Sommers, head of the American Petroleum Institute, said his group would vigorously oppose a halt to new drilling on federal lands and other key pillars of Biden’s climate agenda.

The oil industry will surely continue to argue that any efforts to slow development will hurt economic growth and cost jobs. Frank Maisano, a senior principal with the Bracewell law firm, which represents many clients in the energy industry, said the Keystone XL decision could hurt Biden’s standing with organized labor. “What message does it send to the union people who supported him overwhelmingly?” he asked.

Maisano also asked whether arguments over land use and rights that were used against Keystone XL might now be used to resist renewable energy or transmission projects.

Kleeb, of Bold Alliance, said her movement and the Biden administration need to confront both those questions by ensuring that unions can secure clean energy jobs and by engaging with rural communities where renewable projects are built.

“These are the difficult conversations that are going to have to happen now,” she said, “if we’re serious about building out this energy infrastructure that’s not going to be reliant on fossil fuels.” 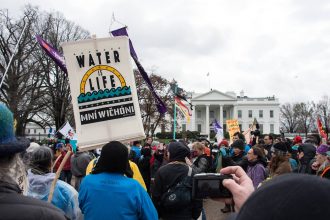