The likely nomination of nuclear physicist Ernest Moniz to lead the Department of Energy has drawn criticism from some environmentalists who say his support for natural gas and close ties to industry would undermine efforts to tackle climate change. Moniz strongly favors natural gas as a “bridge fuel” and directs the MIT Energy Initiative, a research program at the Massachusetts Institute of Technology that is funded by some of the world’s largest fossil fuel companies.

“His appointment to the DOE could set renewable energy development back years,” said a statement released by Food and Water Watch. The environmental group is circulating a petition opposing Moniz’s nomination.

But an examination of Moniz’s public record indicates a more nuanced outlook. Moniz did not return requests for an interview. However, in speeches and reports over the past few years, he has expressed concern for climate change, proposed additional funding for renewable energy and recommended more stringent regulations for natural gas production. He even hinted that he might support a tax on electricity to fund clean energy research.

In December, while speaking at the University of Texas at Austin, Moniz warned that while natural gas could reduce carbon emissions by displacing coal-fired electricity, its increasing use could also slow growth in the clean energy sector.

“When it comes to carbon, [natural] gas is part of our solution at least for some time,” said Moniz, who served as undersecretary of energy during the Clinton administration. “And we should take advantage of the time to innovate and bring down the cost of renewables. The worst thing w[ould] be is to get time and not use it. And that I’m afraid is where we are.”

Moniz’s comments came during a discussion about the impacts of shale gas at the conference, “Comparative Energy: Policies and Technologies in France and the USA.” He spoke on a panel with three industry representatives, a university scientist who studies water resources and a Democrat from the Texas House of Representatives. (Note: InsideClimate News publisher David Sassoon also spoke at the Texas conference, on a panel about energy and media).

During his 10-minute presentation, Moniz called the recent boom in shale gas production—made possible by a combination of horizontal drilling and hydraulic fracturing, or fracking—a “game changer.”

Shale gas, he said, has lowered utility bills and created “something on the order of 600,000 jobs…There is no politician in my view who’s going to walk away from this.”

But he also addressed the environmental impacts of natural gas drilling.

“As a rough general statement I would say all of these [environmental concerns] are manageable, which should not be confused with managing them. And that’s going to be the real challenge,” he said.

While the industry has taken “impressive” steps to reduce its environmental footprint, Moniz said it hasn’t done enough. “There have been water issues—not from fracking, but from bad well completion. There have been surface water spills. There clearly has been methane leakage…I would have to say that the natural gas industry…has not exactly been very forward-leaning in terms of coming together in ways that actually propagate best practices by everyone so that in fact these manageable problems are managed by everyone.”

Moniz didn’t propose any policy solutions during the Texas conference. But two years ago, speaking as a witness before the Senate Committee on Energy and Natural Resources, he told lawmakers that the environmental problems created by fracking “can be mitigated to acceptable levels through appropriate regulation and oversight.”

The committee hearing was about a 2011 MIT Energy Initiative report titled “The Future of Natural Gas.” According to its website, the Energy Initiative is a multidisciplinary program that “includes research, education, campus energy management and outreach programs that cover all areas of energy supply and demand, security and environmental impact.” An Energy Initiative spokeswoman said that as of Oct. 2011—the most recent data available—74 percent of the program’s research projects were related to clean energy, energy efficiency and innovation.

The Initiative’s natural gas report was written by a group of more than 30 scientists led by Moniz and two other study co-chairs.

“Regulation of shale (and other oil and gas) activity is generally controlled at the state level, meaning that acceptable practices can vary between shale plays,” Moniz wrote in his prepared testimony. “The MIT study recommends that in order to minimize environmental impacts, current best practice regulation and oversight should be applied uniformly to all shales.”

Moniz didn’t elaborate on how to standardize regulations and oversight, but his comment touched on a controversial subject. The federal government has little control over oil and gas drilling because the industry is regulated by a patchwork of state laws. The Department of the Interior is finalizing fracking regulations for wells drilled on public lands, but the industry says the rules are redundant and wants regulation left to the states. Environmental groups say the proposed rules are too weak to be effective.

At the hearing, Moniz indicated that the MIT study had strengthened his support for gas drilling.

“Prior to carrying out our analysis, we had an open mind as to whether natural gas would indeed be a ‘bridge’ to a low-carbon future,” he told the committee. “In broad terms, we find that, given the large amounts of natural gas available in the U.S. at moderate cost…natural gas can indeed play an important role over the next couple of decades (together with demand management) in economically advancing a clean energy system.”

At the same time, however, the report projected that natural gas will “eventually become too carbon intensive” and should be phased out around 2050.

In order to ensure that the bridge has a “suitable landing point,” Moniz said, “we must continue to invest in research in carbon-free sources—renewables, nuclear and CCS [carbon capture and storage] for both coal and natural gas.”

Moniz has consistently supported renewable energy. As a member of the President’s Council of Advisors on Science and Technology, he helped write a 2010 report that recommended a federal investment of $16 billion per year for clean energy innovation—about triple the 2010 investment. Some of that money could come from the private sector, the report said. For example, “we use about 200 billion gallons of transportation fuel annually, so a two cents per gallon charge would…generate about $4 billion per year.” It said the same amount of money could be raised by charging a fee for the electricity used nationwide—a suggestion Moniz reiterated at the Texas conference.

Moniz also supported energy research and development in a letter he and Robert Armstrong, a chemical engineer and deputy director of the Energy Initiative, wrote to the MIT community in November. Federal support “for energy research is threatened by substantial cuts in funding and changing priorities,” they wrote. “In this environment, even the evident benefits of plentiful, low-carbon natural gas create unease that the drive for zero-carbon options may stall.”

In the letter, Moniz and Armstrong said there are “alarming indicators” that climate change impacts “are accelerating faster than expected”—but despite the warning signs, there has been “very little collective action” on a national or international scale to reduce greenhouse gas emissions.

Moniz and Armstrong then thanked the Initiative’s funders, including “inaugural Founding and Sustaining Members, BP and Chevron,” which recently renewed their funding commitments to the research program.

“Our program was designed with these partnerships as the core element of MITEI,” they wrote, “and we remain convinced that this is the pathway to maximum impact for advancing MIT’s research and educational mission, for meeting the companies’ science, technology, and human-capacity strategic objectives, and for influencing the energy future.” 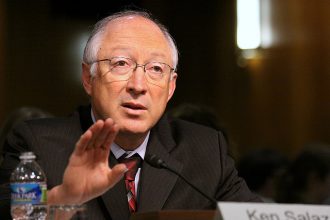