Solyndra was the never-ending story of the year.

The bankruptcy of a solar company that got a half a billion dollars in taxpayer money provided election-year fodder for Republicans, who used it to bash Pres. Obama’s clean energy programs. Fossil fuel interests spent tens of millions of dollars trying to make Solyndra a political liability—to no avail, in the end.

It wasn’t just about Solyndra. In 2012, it seemed every major clean energy policy became a target of prominent conservative groups.

Campaigns were waged to block renewal of a key production tax credit (PTC) for wind developers that will lapse on Dec. 31. Long-standing renewable energy standards also came under fire. Of the 30 states that have such mandates, nearly one-third of them introduced bills this year or last year to weaken or repeal those laws.

Plans for a low-carbon fuel standard in the Northeast struggled to endure attacks from opponents. Three states abandoned the program. It’s now on hold—just as carbon-heavy tar sands oil could soon flow into the region.

At the same time, however, there were hints of a rebirth of cap and trade, the controversial scheme for curbing greenhouse gases. Even after Gov. Chris Christie pulled New Jersey from the Northeast Regional Greenhouse Gas Initiative, news spread that the scheme was sending millions into state coffers. That fact swayed cash-strapped states to begin to give carbon trading a second look.

It was a banner year for California. With the eyes of the nation watching, the country’s climate policy leader launched the first economywide cap-and-trade program in November. The year also saw California approve the most aggressive U.S. clean car mandate, which requires 15 percent of cars sold in the state to be electric, plug-in hybrid or hydrogen by model year 2018. Ten states are gearing to adopt it. On top of that, the Golden State started the world’s first low-carbon fuel standard—though the program remains stuck in legal limbo.

For industry backers, the biggest story of the year was the rapid growth of the clean energy economy.

The United States will install a record 3,200 megawatts of solar power this year—the size of a large nuclear power plant—bringing the nation’s solar capacity to 7,600 megawatts. The boom is partly due to a record drop in solar panel costs, which have plummeted 80 percent in five years.

The U.S. wind sector had its strongest year ever, as companies rushed to get wind farms built before the PTC runs out. In total, 50,000 megawatts’ worth of wind turbines power 13 million American homes. Together, wind and solar make up about 5 percent of the nation’s electricity supply and employ nearly 200,000 Americans.

The most important clean energy development—and perhaps the sector’s biggest future growth engine—was the rise of creative renewable financing schemes in the states. Those wonky initiatives became crucial this year, as Obama’s green stimulus program started to dry up.

For instance, states are increasingly using little-known clean energy funds, or CEFs to invest in research hubs, cleantech startups and green job training programs. Some are laying the groundwork for green banks, in which state agencies become lending institutions for loans and bonds to renewable energy and green building developers.

A handful of cities and counties are helping homeowners do energy-efficiency retrofits and install solar panels using the Property Assessed Clean Energy, or PACE, model. The financing program lets people repay their debt over one or two decades through an assessment on their property tax bills.

About a dozen U.S. cities, regions or states have adopted European-style feed-in tariffs in recent years, which give solar panel owners a fixed price for every kilowatt-hour of clean electricity they feed back into the grid over 20 years. This year, advocates dropped the loaded “tariff” moniker for PR purposes, calling them Clean Local Energy Accessible Now (CLEAN) policies instead.

In Germany, feed-in tariffs were critical in making its clean energy economy the world’s biggest by far—renewables account for 25 percent of energy production.

The United States is still far from that, but as the year closes, the first rumblings of efforts to break the monopoly of utilities and fossil fuels are being heard. 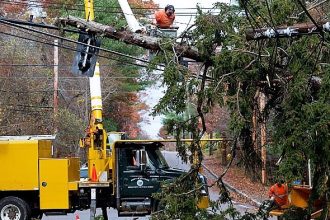 By Elizabeth Douglass and Maria Gallucci