Coal power projects under development around the world saw a precipitous drop in 2016, according to a new report, bringing with it a dose of good news for climate change. With this slowdown, the authors found, the possibility of constraining global warming below 2 degrees Celsius remains in reach—though there is still work to be done.

The report, released by Coalswarm, Greenpeace and the Sierra Club, looks at the amount of new coal power in the works across a number of categories, including projects that have been announced, permitted, put on hold and operating. In most categories, the numbers in the development pipeline weren’t just down—they had seen major declines.

The numbers were also striking in terms of capacity. That serves as a key indicator of how quickly the world is transitioning from fossil fuels to clean energy, the process that needs to move rapidly to head off the climate crisis.

“A year ago, when there were 1,090 GW [gigawatts] of projects in pre-construction planning and 338 GW in construction, prospects appeared dim,” said the report, titled Boom and Bust 2017. “Now, in the wake of massive curtailment of the pre-construction pipeline and construction frozen at over 100 project sites, the odds have improved markedly.”

Most of the decline in planned projects came from China and India. Last year, China imposed new restrictions on the expansion of coal. China suspended many new plant approvals, halted permitting and construction in 26 provinces and regions and made plans to retire old coal plants.

In India, the government has put an end to new coal projects beyond those currently under construction, stating in its National Energy Plan that no additional capacity will be needed for at least 20 years. At the same time, the country is undergoing a solar power revolution, and the falling cost of renewables has helped persuade financial backers of coal to withdraw support, the report found.

This could all spell good news for global climate.

The past decade has seen surges in coal at the same time that global leaders have wrestled with creating a climate accord that could avert the most catastrophic impacts of climate change. Now that the Paris climate agreement has entered into force—aiming to constrain warming to less than 2 degrees Celsius above pre-industrial temperatures—the shift in coal’s prospects comes at a good time.

The report found that in order to meet the Paris goal, including its even loftier aim of limiting warming to 1.5 degrees Celsius, the following things have to happen:

That’s not all, though. To meet the Paris agreement goal, the current pace of coal plant retirements would need to double immediately, “a prospect that appears optimistic at best,” wrote the report’s authors.

“More progress is needed and the margin for error is tight,” the report said, “but the results of the past year provide good reason for optimism.”

Luke Popovich, spokesman for the National Minerals Association, however, said the report is misleading because it is based on projections and not confirmed capacity decisions. And those projections, he said, are overly optimistic about renewables.

“Changes in the global coal build are not simply, if at all, due to a corresponding shift to renewable fuels,” he said.

But these findings have been corroborated by a drumbeat of recent reports that signal a shift away from coal.

The International Energy Agency reported last week that while the world economy grew in 2016, global energy-related carbon dioxide emissions stayed flat, indicating a continuation in the recent decoupling of greenhouse gas emissions and economic activity. This was caused by growth in renewables, a move from coal to natural gas, improvements in energy efficiency and structural changes in the global economy, according to the IEA.

Meanwhile the United States’ Energy Information Administration reported last week that both coal exports and imports were down in 2016. The country remains a net exporter of coal, but those export numbers are down for the fourth consecutive year.

Correction: A previous version of this story incorrectly stated that the number of announced coal projects dropped 49 percent, and on-hold projects increased 164 percent. It was the megawatts of new coal power that declined or increased, not the number of projects. 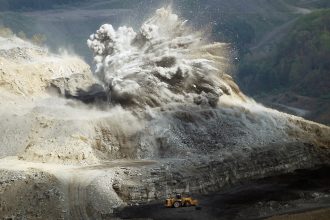