The flooding disaster in Michigan this week emphasized, in stark reality, the warnings by scientists that climate change is causing heavier and more frequent rainstorms in many parts of the country, including the upper Midwest.

Old dams are at risk of failing under the pressure of torrential rains. And in the hours leading up to Tuesday’s failure of two dams about 150 miles northwest of Detroit, about eight inches of rain fell in the watersheds that drain into the Tittabawassee River.

First the 1920s-vintage Edenville dam broke, sending water rushing down the river to Sanford Lake. That deluge overtopped and breached the Sanford Lake dam, officials said, prompting the evacuation of 11,000 people, the flooding of the city of Midland and the inundation of its sprawling Dow Chemical Company complex.

At the Dow plant, the water flooded a containment pond, prompting environmentalists to fear that a toxic brew could spill into the river. That could set back years of downriver cleanup of the pollution from more than a century of chemical production at Dow’s chemical manufacturing plant, they said.

In a statement on its Twitter feed, the company said the flooding at the plant posed no threat to the community. “The material from the brine pond does not create any risk to residents or the environment,” the statement said.

Scientists, environmental advocates, and dam safety experts said that the heavy rains were an example of the extreme weather that scientists have linked to climate change.

He added, “That is especially true the last half-decade and is a trend that has been emerging for the last 50 years.”

The National Weather Service said that starting Monday morning, a stalled low-pressure system across the southern Great Lakes region brought record rainfall to Michigan. Most of the rain fell within a 48-hour period, ending Tuesday, said Ian Lee, a meteorologist with the weather service in Detroit.

In the Midland area, as much as 4.7 inches fell. But about 8 inches fell in watersheds above the two dams. “All of that extra water came in from the North. That’s what led to the dam failure,” Lee said.

In 2018, the Fourth National Climate Assessment specifically noted the dangers of old dams when combined with the impacts of global warming.

Aging and deteriorating dams “represent an increasing hazard when exposed to extreme or, in some cases, even moderate rainfall,” federal   government climate scientists said in the report, warning that global warming poses a growing threat to human life, property, and ecosystems across the country.

The report cited several heavy rainfalls that had led to dam, levee, or critical infrastructure failures, including incidents at the Oroville emergency spillway in California in 2017; Missouri River levees in 2017; 75 dams in South Carolina in the months of October in 2015 and 2016; and New Orleans levees in 2005 and 2015.

States are becoming more aware of the potentially deadly combination of aging dams and climate change, said Bill McCormick, the president-elect of the Association of State Dam Safety Officials.

His organization concluded in a report earlier this year that the nation’s 87,000 dams that are not owned or operated by the federal government needed $66 billion in repairs.

Dam designs typically are based on past weather patterns and do not take into account how the climate is changing. McCormick said the dam safety officials want “forward-looking” national guidance to states so they can do a better job of protecting the public.

“As we are seeing, failure of dams is devastating to downstream communities,” McCormick said, referring to the Michigan dam failures. “To their credit, they had emergency action plans and there was no loss of life, but there was the destruction of property.”

Both the Michigan dams that failed had earthen embankments that were nearly a century old. The dams are owned by Boyce Hydro Power LLC, a company that owns two other dams in the area, as well. The utility’s dams have a history of repeated violations, according to state regulators. A message left for Boyce was not immediately returned.

It was the failure of Edenville, spanning the confluence of the Tittabawassee and Tobacco Rivers, that set the flood in motion. The building of the dam, about 6,600 feet long, with a maximum height of nearly 55 feet, created the Wixom Lake reservoir. In 2018, the Federal Energy Regulatory Commission revoked Edenville’s license to generate electricity, citing its owner’s failure to increase the dam’s spillway capacity to safely handle floodwaters.

The Michigan Department of Environment, Great Lakes and Energy said it took over safety enforcement of the dam in 2018 and, in a written statement, described it as in fair structural condition. However, the agency was also concerned about the inadequate spillway capacity, and was “pursuing additional enforcement action at the time of the breach,” the statement said.

“Lack of investment in dam infrastructure is not uncommon in Michigan dams, which have suffered from deferred maintenance over the course of decades,” the agency’s statement said, “That, combined with the historic rainfall and flooding, were factors in the Edenville Dam failure.”

‘The Red Flag has Been Raised’

Dow opened its chemical operation in Midland in 1897 and over the decades dumped dioxins directly into the Tittabawassee River.  The  Environmental Protection Agency became alarmed in the 1980s that waste runoff from the site was a major contributor to the highly toxic chemicals found in the river, in river-bottom sediment and along the river’s banks. That led to the site’s inclusion in the Superfund cleanup program in 2007.

Cleanup along a 21-mile stretch of the river began in 2012 and included digging up and removing contaminated soil and placing earthen caps on contaminated sites.

The immediate fear is that the floodwaters have inundated chemical containment pond  at the site and may have washed toxic material into the river, though the company told local officials brine water was all that was mixed with the floodwater.

What is unknown is how much damage may have been done to seven other containment sites located at various points upriver and downriver from the chemical plant.

More than 1,000 different chemicals found in the containment sites have been identified as originating from the Dow plant as byproducts of manufacturing chlorine-based materials.

For Terry Miller, chairperson of the Lone Tree Council, a Bay City, Michigan environmental organization, the troubling question is whether remediation work took into account the intense storms and flooding linked to climate change.

“Right now it’s wait and see,” he said. “This will be the big test to see whether there was enough done in preparation for these kinds of events.”

The dam failures in Michigan underscore the vulnerability of Superfund sites across the country to climate-related disasters.

Bill Muno, a former EPA Director of Superfund sites for the Great Lakes Region that includes Michigan and the Dow site, said the floodwaters riling the Tittabawassee River and threatening the release of toxic materials that climate change has to be taken account of in how Superfund sites are safeguarded.

“This is a perfect example of what a climate event can do to these sites,” he said. “It seems, given the fact that these climate events are becoming more frequent and severe, it’s time to circle back and reevaluate climate threats.”

A recent General Accounting Office report warned that Superfund sites beyond Michigan are in peril, with the biggest climate risk from flooding. Muno said he fears the collision of the Trump Administration’s climate inaction and the vulnerability of Superfund sites to climate change will have disastrous consequences.

“The red flag has been raised that a large group of Superfund sites are susceptible to failure with more severe weather events,” he said.

A Remarkable Amount of Precipitation

Michigan and the larger Great Lakes region have been hit especially hard by excessive rain in recent years, scientists said. It’s not just rivers that overflow, but lakes.

Wet areas are getting wetter, and Michigan with its many lakes is a wet area, said Rood, at the University of Michigan, who is also with the Great Lakes Integrated Sciences + Assessments Center. The center is a partnership between the university  and Michigan State University.

A “remarkable amount of precipitation” drove severe Lake Ontario flooding in 2017, and other lake flooding since then, Rood said, noting that the last year has been among the wettest in the state’s history.

The moisture comes from as far away as the Gulf of Mexico but is also fed by the Great Lakes and other lakes in the region, he added.

And climate change is delivering a one-two punch.

“First, you have the storm track moving up here, instead of going across the Southwest,” said Jonathan Overpeck, a climate scientist at the University of Michigan.

“Then you have the greater precipitation because of the greater moisture content in warmer air,” Overpeck said. “If there’s anything that blows you away, it’s how much more extreme it is already.”

The calls for investing in infrastructure upgrades as a way to get the economy humming after the lockdowns of the coronavirus pandemic  offer a chance to get ahead of the global warming impact curve, he said.

“But we really have to be planning for a climate that’s warmer and more extreme,” Overpeck said. “And the real lesson is, we need to stop climate change, or we’re going to continue to have disasters like this more and more in the future.” 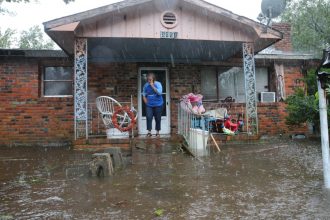 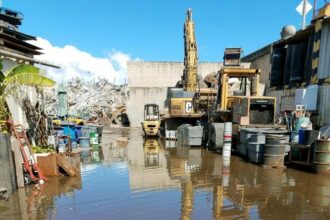 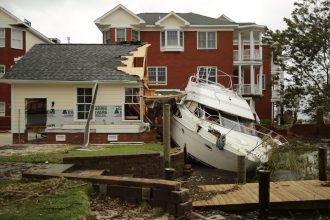