The Environmental Protection Agency’s Office of Inspector General will investigate how the agency estimates methane emissions from the oil and gas sector after an environmental group alleged that its emission estimates and regulations are based, in part, on faulty studies.

The evaluation, announced Wednesday, will focus on a pair of studies conducted jointly by the University of Texas–Austin and the Environmental Defense Fund in 2013-2014 that found methane emissions to be lower than EPA estimates. The studies, which were done in cooperation with a number of oil and gas companies, were subsequently challenged for allegedly using faulty equipment and underestimating emissions.

“This evaluation’s objectives are examining the results of and concerns/problems with the 2013 and 2014 emission studies conducted by the Environmental Defense Fund and the University of Texas-Austin,” EPA OIG spokesperson Jennifer Kaplan said in an email.

The oil and gas sector is the leading source of human-derived methane emissions in the U.S., emitting more than either the agricultural sector or landfills, according to EPA estimates. Regulation of the powerful greenhouse gas has been in dispute since the Trump administration arrived and began rolling back President Barack Obama’s efforts to rein in emissions.

A 2014 report by the agency’s inspector general’s office determined the EPA needed to do more to address methane emissions from natural gas distribution pipelines, the low-pressure pipelines buried under cities and towns that distribute gas to end users. The report found that $192 million worth of natural gas leaks from such pipelines each year, with significant implications for the climate and for consumers who are charged for the lost gas.

In 2016, the environmental group NC Warn petitioned the EPA’s inspector general’s office to investigate the University of Texas–Austin and EDF studies. The EPA declined to do so, stating in a letter to NC Warn that “this [case] is being closed.”

The office of the inspector general, an independent watchdog that polices the agency, has since reconsidered the petition.

“The decision to pursue a program evaluation on this topic is, in part, related to a 2016 request to the EPA OIG by the environmental advocacy group NC Warn,” Kaplan said.

While the NC Warn petition called for a criminal investigation, the inspector general’s office will instead conduct a program evaluation, an audit that follows different processes with different goals, Kaplan said.

Kaplan noted that the NC Warn request specifically cited technical problems with the two University of Texas–Austin and EDF studies that allegedly impacted the reliability of the studies and alleged that the EPA had used the study results to develop policy and regulation related to the emissions of methane from oil and natural gas production.

“It is important to note that the EPA OIG, at this time, has made no determinations or conclusions regarding the validity of the concerns cited in the NC Warn complaint,” Kaplan said.

The office of inspector general audit seeks to answer “whether concerns about technical or other problems with the Environmental Defense Fund and University of Texas–Austin studies were identified or brought to the EPA’s attention, and how the EPA addressed and resolved any such concerns,” according to a letter to EPA staff from James Hatfield, director of air evaluations for the EPA inspector general’s office of program evaluation.

“I think and hope that this means that the good people at the EPA who realize they need to get to the bottom of this have not dismissed the concerns that have been raised,” NC Warn Executive Director Jim Warren said.

Warren and others say actual emissions may be significantly higher than EPA estimates. Efforts to better determine the actual rate of methane emissions, many of which have been led by EDF, have received significant attention in recent years.

A spokesperson for David Allen, the lead researcher on the 2013-2014 studies said he welcomed the inspector general’s investigation. “Dr. Allen has full confidence in the research and welcomes all reviews,” J.B. Bird, director of media relations at the University of Texas–Austin wrote in an email. “He believes such scrutiny is an essential part of the scientific process.”

The Environmental Defense Fund reacted similarly to the evaluation.

“We’re glad to have the EPA inspector general’s office take a look at this, but it’s an issue that frankly came up close to 2-3 years ago and was well discussed in the scientific literature at the time,” Mark Brownstein, EDF’s vice president for climate and energy, said. “Presumably, the IG’s office will take a look at all of that and be able to make sense of all of this.”

The EDF-led research has resulted in 33 peer-reviewed papers published in academic journals. The group has yet to publish a final synthesis of its research, but Brownstein estimates that roughly 2 percent of the methane produced by the oil and gas industry is emitted or otherwise lost on its way to end users.

The EPA’s current estimate is 1.3-1.6 percent, according to EDF.  If the 2 percent emissions rate is correct, it would equal roughly 10 million metric tons of methane emissions per year, the equivalent greenhouse gas emissions of more than 200 coal-fired power plants, according to EDF.

“It is clear that methane emissions from the oil and gas industry are too high—higher than EPA had long estimated, and that strong regulations are necessary to reduce them,” Brownstein wrote in a blog post following the inspector general’s announcement.

“At the end of the day this is probably much ado about nothing,” Brownstein said. 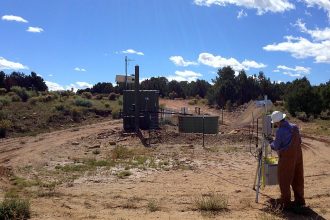