Today the gently rolling Kalamazoo River in southern Michigan flows clear once again. There are few reminders that five years ago the largest inland oil spill in U.S. history turned 40 miles of the river black.

There is, however, a $100 million piece of unfinished business.

That’s the scale of the fine the U.S. Environmental Protection Agency may impose on Enbridge Inc., the Canadian pipeline company responsible for a 1 million gallon spill of highly toxic oil into the river in 2010. Under the Clean Water Act, the agency has until July 25—the fifth anniversary of the disaster—to levy punishment.

The case represents another opportunity for the EPA to deliver a stern message on preventing oil spills, environmental lawyers and pipeline safety advocates say. The agency this month fined BP a record $5.5 billion for the 2010 Deepwater Horizon blowout in the Gulf of Mexico. The Enbridge case falls under the EPA’s “Next Generation Compliance” Initiative. The program, which the EPA began implementing this year, encourages regulators to include “innovative” measures in enforcement settlements that—in addition to fines—require companies to take steps to prevent future spills.

“The message is, ‘These kinds of spills will not be tolerated,'” said Anthony Swift, an attorney for the Natural Resources Defense Council (NRDC), an environmental group. The penalty has to hurt, Swift said, and it has to come with a directive to Enbridge that will reverberate throughout the industry: Do a better job.

“Not only will they not be tolerated, you––the industry––are responsible for taking precautionary measures to prevent future spills,” he said.

EPA officials declined to discuss the Clean Water Act penalties. Enbridge executives acknowledged negotiations with the agency but declined to comment further. The company and the EPA are discussing an extension of the deadline, an Enbridge spokeswoman said.

The Kalamazoo River spill was the first major pipeline disaster to involve an especially toxic form of crude oil known as diluted bitumen, or dilbit. Tar-like bitumen from deposits in Canada must be thinned with volatile chemicals so it can flow through pipelines. The controversial Keystone XL pipeline would carry this substance across the Canadian border to Steele City, Neb. Since the Michigan spill, more tar sands production has come online.

The EPA fine will only add to Enbridge’s Kalamazoo tab. So far the company has been penalized a total of $89.5 million, including settlements with the Michigan Department of Environmental Quality, the U.S. Department of Justice’s Environment and Natural Resources Division, Michigan landowners and a civil penalty imposed by the U.S. Department of Transportation. Cleaning up the spill, rebuilding the pipeline and upgrading the rest of its network cost a total of $7 billion. Enbridge is Canada’s largest transporter of crude oil and worth an estimated $30 billion.

Federal law dictates that penalties must be imposed within five years of a Clean Water Act violation. But in cases like Enbridge’s, it’s not uncommon for negotiations to go beyond the statute of limitations, said Andy Levine, a former EPA attorney who is now in private practice in Philadelphia. Extending the deadline would indicate that the EPA and Enbridge want to keep the case out of court, where the dispute could drag on for years, he said.

“Environmental cases are extraordinarily complex,” he said. “A lot of lay people say, ‘they polluted.’ That’s black and white to them. But the government has to follow guidelines in building a case as to why the penalties are justified.”

While the agency won’t discuss that, environmental law experts agree the Enbridge case is complicated. Regulators and the company have never agreed on how much oil was spilled, or on whether a spill of dilbit should be treated any differently from a spill of conventional crude. Those issues will have a bearing on the size of the fine, as well as whether there’s a determination of negligence, these individuals say.

Adding to the complexity of the case is that the EPA will have to take into account Enbridge’s history of compliance or non-compliance with pipeline safety and environmental regulations, and whether it stood to gain financially by ignoring warning signs of a potential spill.

Before the accident the National Transportation Safety Board found that for five years Enbridge had failed to repair defects in the area of the spill. Afterwards, the agency blasted Enbridge for a “complete breakdown of safety” in connection with the Kalamazoo spill.

EPA may therefore consider whether Enbridge ignored multi-million dollars in repairs, hoping that nothing catastrophic would happen or that any fines would cost less than maintenance on the aging line, said Swift of the NRDC.

He and others said that to change corporate behavior fines should be large enough to erode economic incentives to cut safety corners. “The EPA now has the opportunity to change the dynamics of the way a company thinks about safety,” Swift said.

Penalties by the Barrel

The Clean Water Act, which went into effect in 1972, empowers the EPA to levy fines of as much as $1,100 for each barrel—42 gallons—of spilled oil. The maximum penalty rises to $4,300 a barrel if the agency concludes the spill resulted from negligence. The EPA’s $5.5 billion Deepwater Horizon fine works out to $1,100 for each of the 5 million barrels spilled, even after the agency found negligence.

In the Kalamazoo River case, EPA estimates of how much oil spilled over 17 hours have been as high as 1.1 million gallons, or 26,190 barrels. Enbridge maintains it was about 843,000 gallons, or about 20,000 barrels. Based on the EPA estimate, Enbridge could face a fine of as much as $112 million if the agency rules negligence.

“There are so many factors that can be considered that it’s difficult to say with certainty what the final figure might be,” said Rebecca Craven, program director of the Pipeline Safety Trust in Bellingham, Wash. She cited the way the BP fine fell far short of the potential maximum of $14 billion.

In a November 2014 filing with the U.S. Securities and Exchange Commission, Enbridge estimated a fine of $40 million, double its estimate of a year earlier. That would make the Enbridge penalty the highest imposed for a Clean Water Act violation involving oil pipeline spills in the last 15 years, according to an InsideClimate News review of EPA data.

An additional factor may be defining the kind of oil that spilled, said Richard Kuprewicz, president of Accufacts Inc., a pipeline consulting company. After the disaster, Enbridge took the position that dilbit is no different from regular crude oil, and the industry has made a concerted effort to avoid anything that differentiates the two.

Critics say tar sands oil is more corrosive and has to be pumped at higher pressure than ordinary crude. That puts more stress on pipelines and magnifies existing flaws. Cleanup is more difficult because it sinks in water rather than floating, rendering traditional recovery methods useless.

“The party line has been that dilbit is nothing more than heavy crude oil,” said Kuprewicz, who has served as an adviser to the Pipeline and Hazardous Materials Safety Administration, the federal agency that oversees pipelines. “These Canadian companies have a vested interested in convincing people this oil acts like conventional crude.”

The EPA’s “Next Generation Compliance” program may figure in a settlement. The initiative compels pipeline operators to step up compliance with environmental regulations and employ more advanced safety technology. The tools outlined by the EPA include advanced monitoring to detect leaks and flaws, independent third-party monitoring of compliance, electronic reporting of safety data and public accountability through increased transparency of compliance information.

The protocol adds requirements that violators implement substantial changes to their operations in addition to paying fines, said David Hindin, the EPA’s senior policy director for innovation and next generation compliance.

“If one company makes a positive change because of Next Gen compliance, then there is a message to the industry at large that says, ‘see it can be done,'” Hindin said. He declined to discuss how EPA’s negotiations with Enbridge might include Next Gen requirements. 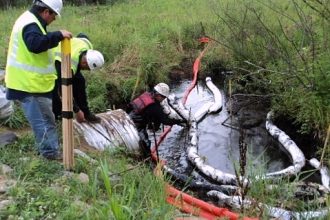