For as long as scientists and policymakers have been grappling with climate change, they’ve been up against two critical questions: How much extra carbon has mankind sent into the atmosphere? And how much more can be added before global warming becomes disastrous?

Climate researchers have spent decades tracking and quantifying the complex flows of carbon into and out of the atmosphere, but those questions couldn’t be answered convincingly until 2009. That’s when a group of European scientists published a groundbreaking and highly credible global carbon budget that filled the information void. Using a comprehensive climate model, the scientists determined the maximum amount of greenhouse gases mankind could send into the atmosphere without triggering catastrophe—and then found that more than a quarter of that budget had been spent by 2006.

That advancement and many others have helped produce many detailed carbon budgets, giving policymakers and others a relatively simple tool for grasping a complex subject. By linking the carbon emissions budgets to the goal of keeping average global temperatures from rising by more than 2 degrees Celsius (3.6 degrees Fahrenheit), it’s possible to calculate rough answers to other key questions, such as how much longer the carbon budget might last if fossil fuel emissions were cut in half.  The same framework can also provide guidance on specific, localized issues routinely decided by national, regional and local governments. For example, emissions estimates can show how each new coal power plant would affect the global carbon budget.

“It’s good for us to be able to have this marker, to be able to constantly measure where we are in terms of when the carbon budget’s going to run out,” said Kelly Levin, a senior associate and climate science specialist at the World Resources Institute. a research organization focused on global sustainability. “We have to make sure that the types of policies and decisions and technologies that we put in place are in line with making sure that the carbon budget lasts as long as possible.”

Here’s a quick primer on the basics of carbon budgets:

What is a carbon budget?

It’s an estimate of the maximum amount of greenhouse gases that can be released into the atmosphere over time and still keep warming limited to a specified level. In many cases, carbon budgets are pegged to holding the average global temperature increase below 2 degrees C compared with the beginning of the Industrial Age in the 18th Century. Accelerated burning of fossil fuels over the past 2½ centuries has poured billions of tons of carbon into the atmosphere, causing global surface air temperatures to warm already by an average of 0.8 degrees C. Scientists have estimated that 2-degree warming would trigger a host of more drastic changes in the climate, including effects that would be irreversible.

Most carbon budgets focus solely on emissions of carbon dioxide, or CO2. That’s because it’s by far the largest contributor to global warming. Others, such as the carbon budget cited by the United Nations-led Intergovernmental Panel on Climate Change, include estimates for other greenhouse gases such as methane. For simplicity and consistency, this discussion refers only to carbon budgets that track CO2 emissions.

Where did the carbon budget concept come from?

It grew out of a series of scientific studies that established a clear link between the accumulation of greenhouse gases in the atmosphere and changes in mean surface air temperatures. Researchers found that temperatures increased 1.8 degrees C for each 3.7 trillion metric tons of additional CO2 in the atmosphere. Emissions are expressed in metric tons, each of which is equal to 1.1 U.S. tons, or 2,205 pounds.

Researchers also improved the method for estimating volumes of CO2 and other gases that are constantly moving into and out of the atmosphere. Those emissions are both naturally occurring and man-made. That led to complex equations aimed at predicting carbon gas exchanges involving plants and oceans, as well as shifts in emissions from human activities, such as burning fossil fuels and destroying forests that would otherwise absorb CO2.

In 1992, nations participating in climate treaty talks through the UN Framework Convention on Climate Change agreed to hold human-caused global warming below a level that would cause “dangerous” climate change. That led to the 2-degree benchmark and an agreement to consider lowering that goal to 1.5 degrees. Researchers from Germany, the U.K. and Switzerland, led by scientist Malte Meinshausen of the Potsdam Institute for Climate Impact Research, are widely credited with being the first—in 2009—to combine all of those elements into a rigorous, comprehensive scientific model to calculate a 2-degree carbon budget. Since then, carbon budgets have become a staple of climate change analysis.

How big is the budget?

The answer depends on several variables and it’s constantly being adjusted. The September 2014 carbon budget from the Global Carbon Project, a consortium of university and government scientists and researchers, put the latest 2-degree limit at 3.2 trillion metric tons of CO2. According to the budget, if emissions stay below that mark, there is roughly a 66 percent chance that the world would not trigger the most destructive forces of climate change.

Where do we stand now?

From 1870 to 2013, human activity added about 2 trillion metric tons of CO2 to the atmosphere, according to the Global Carbon Project. That means almost two thirds of the budget already has been used. The emissions came from burning fossil fuels for heat, electricity, factories, ships, planes, trains and automobiles, as well as from cement production, agriculture and land use changes.  Because fossil fuel emissions have accelerated over time, humanity is on track to use up the remainder of the budget in the next three decades—or perhaps as early as 2031.

It isn’t promising, but analysts say a concerted global effort could still avert runaway warming. To do that, worldwide CO2 emissions would have to be cut 40 to 70 percent by 2050, and then drop to nearly zero by the end of this century, according to the IPCC. Such sharp reductions in fossil fuel emissions would require a rapid and massive shift to renewable energy such as solar and wind generation. Cars and homes would have to become more efficient. To keep existing power plants in service, there would have to be widespread use of new and expensive carbon-capturing technologies. Corporations and governments are moving in some of those directions, but gains are offset by ongoing fossil fuel subsidies and policies that support the expanded use of coal, oil and natural gas. World leaders haven’t signed a binding agreement on cutting CO2 emissions. Some countries, such as Australia and Japan, have backed away from earlier climate pledges. The U.S. and others haven’t moved because of domestic politics.

In a 2014 report, the International Energy Agency included data analysis and projections covering three potential scenarios for global warming. In one of them, the worldwide average temperature rises 6 degrees from pre-industrial levels. That, the IEA said, is “where the world is now headed with potentially devastating results.”

What’s being done to head off escalating emissions?

International leaders and the UN have been working toward a global climate treaty that would include binding targets and timelines for making CO2 emissions cuts that are large enough and quick enough to meet the 2-degree limit. Many large countries made pledges to achieve reductions by 2020, but only a few are on track to meet them. The U.S., Japan, Australia and Canada–some of the world’s top polluters–are among the nations that are expected to miss their targets.

A growing number of governments are embracing policies that would lower fossil fuel emissions by making it more expensive to use coal, natural gas and oil-based fuels such as gasoline. Measures include removing or reducing subsidies for fossil fuels, taxing fossil fuel consumption, and imposing “cap and trade” carbon trading systems that limit CO2 emissions and require polluters to buy emission credits.

Governments, companies and investors are also putting their support behind renewable energy to replace coal and natural gas power plants. Germany has pressed ahead with an aggressive rollout of wind and solar power, and China and some parts of the U.S. are taking similar steps. Corporations have begun weaning themselves off fossil fuels, and investors are increasingly willing to fund projects aimed at reducing carbon emissions.

What could improve the outlook?

An international climate treaty or a similar international agreement could create a unified front. Any emission-reducing policies in fast-growing economies such as China and India would have an outsized effect on the accumulation of carbon. China’s new pledge to limit imports of high-sulfur coal is one example.

Technological advances could help, too. Rapidly falling prices for solar and other renewable power equipment are encouraging expanded use, and engineering improvements could accelerate that trend. Advances in energy-saving technologies and their widespread adoption would lower demand for fossil fuels. Many believe an aggressive rollout of more nuclear power plants is required as well, but that’s a controversial solution, especially in the wake of the Fukushima disaster in Japan.

All of those developments would have the added effect of lowering demand and prices for fossil fuels. This could force fossil fuel companies to cut production and scale back the search for more supplies.

One of the biggest shifts would be widespread adoption of technology that could capture carbon emissions or remove them from the atmosphere. This intercepted carbon could then be stored or used for some other purpose. Reports by the Intergovernmental Panel on Climate Change have cited the possibilities of a geo-engineering solution known as bio-energy with carbon capture and storage. That’s a controversial approach that includes burning biomass (trees and plant waste) to generate energy, and then collecting the CO2 emissions and storing them underground. By replanting the trees, which remove CO2 from the atmosphere, advocates argue that the process provides energy and creates a net reduction in CO2 at the same time.  Those kinds of developments could allow polluting power sources to maintain a large presence in a low-carbon economy.

Putting government and investor money behind all of these efforts would speed up the process and give the world a better chance of limiting warming. Recent economic and technological analyses have concluded that transforming the global energy system would require about $1 trillion per year in extra funding over 36 years. Some of that cash could come from pension funds, insurance companies and other major investors, analysts say.

What could worsen the outlook?

Continuing the steady rise in fossil fuel use without capturing CO2 emissions would speed up warming. If the world’s economically retrievable reserves of oil, coal and natural gas are burned, they would release more than 2,860 billion metric tons of CO2, according to the IEA’s 2013 World Energy Outlook report. That’s more than double what’s left in the Global Carbon Project’s 2-degree budget.

To keep the climate within the 2-degree warming limit, three-quarters of those reserves would have to stay in the ground, according to the IEA’s 2012 estimate. That batch of reserves doesn’t include an even larger cache of already discovered fossil fuel supplies that are waiting in the wings until energy prices make it profitable to retrieve them. 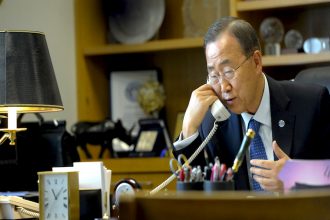 Climate Summit: Turning Point, or Not?