A United Nations chief dismayed at the lack of resolve toward the climate crisis; a daunting deadline for negotiating a new treaty; 125 or so heads of state; a sprawling agenda of fossil fuels, food, forestry and finance; a train of think tanks hauling gigabytes of green data; countless teach-ins, press conferences, art shows—plus tens or even hundreds of thousands of activists marching through midtown Manhattan, demanding action now.

Are these Climate Week events the makings of a turning point in the world’s effort to escape the risks of climate change, or a formula for futility?

There are ample grounds for pessimism as preparations begin for the September 23 UN summit on climate change, being held in New York City. But that doesn’t make it any less urgent for negotiators trying to keep the world from warming more than 2 degrees Celsius, that elusive diplomatic grail.

Even some naysayers hold that something positive may come out of the chaos, in the way that the artist Xu Bing has turned scrap into huge sculptures of the mythical phoenix to hang in the nave of Saint John the Divine’s during an interfaith service planned for the occasion.

“In the real world, what we see is significant climate action being taken not only by individual nations, but by all sorts of other actors: municipalities, states, individuals, businesses, sectors, all are taking action,” wrote Michael Liebreich, chairman of the advisory board of Bloomberg New Energy Finance. “There are bilateral deals, multilateral actions in all sorts of forums. Is it enough to limit climate change to 2°C? Not yet. But it is enough to demonstrate that a top-down deal is far from the be-all and end-all of climate action—indeed that it may not be needed at all.”

But some kind of a deal—whether top-down, bottom-up or inside-out—is what the leaders of all these events are looking for, and the sooner the better.

They are trying to reinvigorate a series of talks over the next 15 months that will culminate in Paris in December, 2015, the target date for a binding treaty that would take full force in 2020. A draft treaty is supposed to be put on the table at the end of this year at a meeting in Lima, Peru. By next spring, every country is supposed to be ready to spell out what commitments it is willing to make.

What UN Secretary General Ban Ki-moon is hoping for at this month’s summit, he has said, is “bold actions” that will lend momentum to the negotiations, which have only crept forward since the last big attempt to reach a binding treaty failed in 2009 at Copenhagen. “I remain alarmed that governments and businesses have still failed to act at the pace and scale needed,” he has said.

Not that the New York summit is guaranteed to produce a grand bargain, or even a clear path forward for the negotiations. Ban’s key aide, Selwyn Hart, told reporters in a conference call the other day that the summit “is not part of the formal negotiations” and “will not solve the problem of climate change by itself.”

Nevertheless, he said, “it can be an important turning point that will allow us to move towards a pathway that will limit the temperature increase below 2 degrees,” he said. “We expect leaders to reaffirm their commitment to a 2 degree path.”

For the past year, the UN’s Intergovernmental Panel on Climate Change (IPCC), keeper of the scientific consensus, has been declaring that the situation is dire. The draft of its latest summation, leaking out just in time for the New York summit, warned again of “severe, pervasive and irreversible” impacts if the world does not change course.

The World Meteorological Organization reported officially on September 9 what everyone knew would be another grim statistic: the atmosphere’s carbon dioxide burden grew again last year, this time by 3 parts per million, the fastest increase of greenhouse gas in three decades. It is now at the brink of 400 parts per million; 450 is the concentration thought likely to produce about 2 degrees of warming. Beyond that threshold, scientists say, the risks of severe warming escalate significantly.

Not wanting to drench its audience in data, the WMO also marked the occasion with an imaginative video of a Weather Channel forecast from the year 2050, complete with familiar meteorologists reporting on flooded coastlines, parched towns, sweltering ballparks and cruises in the open waters of the Arctic.

In a more serious warning to the negotiators who have to dot the i’s and cross the t’s on any treaty, WMO Secretary General Michel Jarraud remarked acidly in a statement, “the laws of physics are non-negotiable.”

The problem, said Leo Johnson in the annual Low Carbon Economy report produced by the accounting firm Price Waterhouse Cooper, is that nations are talking about 2 degrees of warming and making pledges that might lead to 3 degrees—while the world is currently heading for 4 degrees of warming by the end of the century.

“The global economy now needs to decarbonaize at 6.2 percent a year, more than five times faster than the current rate, every year from now till 2100” to hit the 2 degree mark, the report said.

Despite the challenge, some leading nations continue to pay at least lip service to the 2 degree target.

The government of the United Kingdom did so on September 9 as it issued its own road map toward a Paris treaty.

Given that emissions are currently on the wrong track, “we are now playing catch up,” the report acknowledged. It used carefully hedged words for its Paris ambitions: “steering the world back toward the 2 degree path,” and “keeping the 2 degree goal within reach.”

The UK is in a better spot than some other countries to talk that way. Edward Davey, the UK’s minister of energy and climate change, noted in the report that “the UK already has legally binding targets to reduce our emissions up to 2050, and these are in line with the 2 degree C limit.”

Not so President Obama, who will attend this month’s summit. He is not only fighting tooth and nail with Congress over regulations to keep U.S. reductions on track, but also faces the likelihood that his party is about to lose control of the Senate, which must ratify any formal treaty.

For that reason, the administration has been setting low expectations for a climate agreement out of Paris.

The marchers intend to send a powerful signal to Obama and to other U.S. politicians, but the message won’t be spelled out in a precise platform, or even described in soaring oratory from the steps of some monument. Instead, they’re relying on their sheer numbers to grab the limelight.

But even if they turn out a million strong, this event seems unlikely to turn the tide of the next election, or have an immediate and tangible political result.

Unlike Obama, neither Premier Xi of China nor India’s new prime minister, Narendra Modi, will attend the summit in person, sending high-level stand-ins instead. (Other no-shows include Germany’s Angela Merkel and Canada’s Stephen Harper, two politicians with little in common when it comes to climate.)

“I would not recommend that we read too much into the person who’s going to be speaking for the Chinese and the Indian governments,” said Christiana Figueres, executive secretary of the UN’s Framework Convention on Climate Change, in a conference call.

“What is important is going to be for all of us to be vigilant and attentive to the very strong message that both of these governments as well as many other governments will be delivering.”

China, for example, has signaled that it is about to expand its regional carbon-trading markets into a national system, among many other recent steps to rein in its emissions, which are now greater than any other nation’s and growing fast.

That is precisely what practically all the major multilateral financial and development institutions have been calling for: widespread imposition of a price on carbon, either in the form of a carbon tax or a cap-and-trade system.

That, Rachel Kite of the World Bank said in a call with reporters, is “the most powerful move a government can make.”

“What’s missing is a strong policy response around the world,” agreed Nigel Topping of CDP, speaking as part of a coalition of groups called “We Mean Business” who are pressing to involve more corporations in the climate effort. “It holds businesses back from bold investment.”

“The inclusion of business at the summit and over the past few years is frankly a recognition that climate change is not a one person or one sector issue,” Figueres said.

“It cannot be solved by one country, one sector or one level of government. Climate is an every-person issue, and it requires everyone to work collaboratively in order to reach the solutions to the level and at the speed we need to find.” 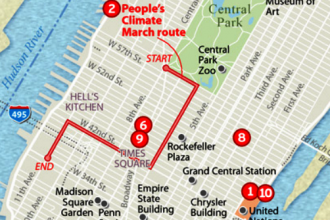