A 12-member National Academies of Science study committee will reconvene in Washington this week armed with research from academics and federal agencies about an increasingly popular form of Canadian oil, known as dilbit. The committee is charged with determining whether dilbit is more likely to corrode pipelines than conventional oil.

But one question remains as the data-gathering nears its conclusion: how much information will the committee get from the industry it is studying?

The answer depends on the pipeline operators themselves, said Thomas Menzies, a senior program officer with the National Academies who is overseeing the study. The committee could ask for data that the industry has gathered about pipeline spills, including those involving dilbit. But companies aren’t obligated to turn over internal information, and Menzies said the committee will not push for information that could be proprietary or expose the companies to competitive risk.

Dilbit contains heavy Canadian bitumen, also known as tar sands oil. Because bitumen has the constituency of peanut butter, it can’t flow through pipelines unless it is diluted with liquid chemicals. (Hence the name “dilbit.”) The Natural Resources Defense Council, an environmental group that opposes the extraction and importation of bitumen, argues that dilbit is so caustic that it corrodes pipelines faster than conventional oil. The industry, however, maintains that dilbit does no more damage than regular oil.

In December 2011, 17 months after a ruptured pipeline owned by Enbridge Inc. spilled more than a million gallons of dilbit into the Kalamazoo River, Congress ordered the federal Pipeline and Hazardous Materials Safety Administration (PHMSA) to commission a report on dilbit. NAS studies traditionally focus on existing work reviewed by panels of academics, researchers and industry experts.

A recent investigation by InsideClimate News found that cleanup of the Michigan spill has been more difficult than a conventional oil cleanup. The work has already cost Enbridge $809 million, and the U.S. Environmental Protection Agency recently announced that more oil needs to be dredged from more than 100 acres of the river.

Carl Weimer, executive director of the nonprofit, nonpartisan Pipeline Safety Trust, said the committee’s work is important given the general lack of scientific knowledge about dilbit. Weimer wants the committee to look at “anything they can get their hands on.” Gaining access to industry data would be especially helpful, he said, because pipeline operators are among the few who’ve had direct experience with dilbit.

Some data is publicly available from federal spill reports that pipeline operators are required to file, and PHMSA will discuss that data with the committee this week. But InsideClimate News has examined the PHMSA database and found that those reports are often incomplete.

Weimer said it’s his understanding that spill data kept by operators and industry groups are “much more verified” than the government data.

Of particular interest is an incident database kept by the American Petroleum Institute (API), which represents the oil and natural gas industry.

In an interview last week, API pipeline director Peter Lidiak said the group will give the committee aggregated data, but it won’t provide reports on individual spills.

Lidiak said API’s cooperation is limited by its agreement with its members that individual spill data won’t be released. He said individual reports can be “difficult to look at and understand,” with information that could be confusing to outsiders.

API began collecting spill data in 1999, just months before an Olympia Pipeline Company rupture in Bellingham, Wash. spilled 236,000 gallons of gasoline into two nearby creeks. Early on, API’s data was more complete than the federal government’s, Lidiak said, because API gathered reports on spills as small as 5 barrels, while PHMSA only collected for spills over 50 barrels.

Lidiak is scheduled to make his second presentation to the committee on Tuesday. Also appearing at this week’s meeting is former Conoco Pipe Line president Thomas Miesner, Crude Oil Quality Association executive director Harry Giles and representatives from other oil companies and from PHMSA.

The goal, said Menzies, is to “do as much as possible to allow all viewpoints and all technical positions to make presentations” before the committee starts to narrow its scope. After this week, he said, the committee will start to divvy up the research it has gathered and “get a handle” on where to go from there.

This week marks the committee’s third meeting. Its initial meeting was held in July and a second one was held earlier this month in Edmonton, Canada, where members heard from several researchers and pipeline operators, including representatives from Enbridge.

Congress has asked for the report to be completed by next summer.

The committee, like most NAS committees, is not doing any original research or testing. Instead, it is drawing on published reports from researchers, pipeline operators, safety officials and federal agencies. Some of that information has been requested by the committee, but as is standard with NAS reports, academics and groups have approached the committee to present their own research.

Menzies said that information pool can include input from pipeline operators, but within limits.

“We’ll seek it and if we’ve been told that they’re willing to provide it, we can ask for it specifically,” said Menzies. “That can be difficult, though, because companies don’t always want to provide information if it’s proprietary … How can we get data from the industry that’s credible and that doesn’t raise proprietary concerns?”

At least four of the 12 committee members have ties to the industry.

Orville Harris, president of the consulting group O.B. Harris, LLC, worked for 14 years as a vice president for Longhorn Partners Pipeline and served as president of ARCO Pipeline Co in the early 90s. He also has advised PHMSA on safety issues.

George Tenley served in PHMSA overseeing pipeline safety before joining the Pipeline Research Council International, which draws funding from pipeline operators. He retired from the council in 2010.

It’s not unusual for an NAS committee to have experts from the industry it is studying, and Menzies said care is taken to make sure they don’t have direct conflicts of interest.

“They can ask the right questions and inform the rest of the committee about operations,” he said. While other committee members offer expertise in specific areas, those with industry ties can offer “perspective in how the industry operates.”

The committee combs through all the data it receives, Menzies said, to avoid potential conflicts or biased work. The committee accepts only “credible, peer-reviewed work” and tries to avoid studies that have industry funding.

Menzies said that he’s been surprised to see less response from the “counterpoint to the industry,” such as environmentalists or researchers who believe dilbit is especially corrosive.

Because Congress limited the study to whether dilbit is more corrosive than conventional oil, the committee won’t explore in depth two questions that emerged after the Michigan spill: How does dilbit differ from conventional oil when it spills into water, and how does it affect human health and cleanup responses?

Weimer said safety advocates will eventually want a deeper dive into dilbit, especially after the Michigan spill showed that “heavy tar sand acts different when it spills out of a pipeline.”

But the first step, he said, is getting a “comprehensive” read from the NAS committee, based on whatever evidence it can find.

“Maybe it’ll come back and say that dilbit is not a big deal, but I don’t know that,” Weimer said. “Right now, we have so many valid questions.” 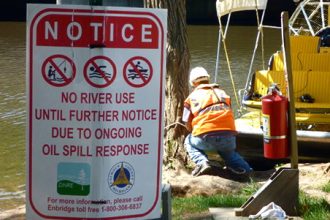