Fewer than 2,000 monarch butterflies were counted overwintering this year along the California coast—a staggering drop from the 30,000 last winter and a 99.9 percent decline from the several million butterflies that once spent the winter between San Francisco and San Diego in the 1980s, a report from the Xerces Society said this week.

The plunge in numbers signifies a near collapse of the western population of the species, which spends the winter months in California. The monarchs migrate northward in the western United States during the spring, summer and fall months, producing several generations before an autumn generation migrates back to the West Coast for winter. The Xerces Society, an insect conservation nonprofit, has used community volunteers to count the monarchs at overwintering sites since the 1990s. The number of monarchs counted each year has trended downward, even though the number of sites being monitored has increased.

A key solution the Xerces Society is focusing on to help the remaining monarch population is planting more milkweed, the only plant monarchs can eat. Because climate change is causing the early spring generation of monarchs to start their migration early, Hoffman Black said, it’s best to plant milkweed species that come up early in the spring, like Asclepias californica, known as California Milkweed, in the California Central Valley.

Looking at the stark decline of western monarchs, Hoffman Black said, “I’m not optimistic; I’m leaning towards pessimistic.” But, he added, “I think we still have a chance, and we have a responsibility to see if we can keep this iconic species on the landscape.”

Greta Gets the Last Word

It began in September 2019, when a video of Thunberg’s stern address to the United Nations went viral.

“You have stolen my dreams and my childhood with your empty words,” she said in the video. “People are suffering; people are dying.”

In response, President Trump quote-tweeted: “She seems like a very happy young girl looking forward to a bright and wonderful future. So nice to see!”

Thunberg reacted to Trump’s jab by embracing it in her Twitter bio, describing herself as “a very happy young girl looking forward to a bright and wonderful future.”

In December 2019, after Thunberg was named Time Magazine’s Person of the Year for her role in sparking a youth climate movement, Trump trolled her again. Quote-tweeting actress Roma Downey’s congratulatory note to Thunberg, Trump wrote, “So ridiculous. Greta must work on her Anger Management problem, then go to a good old fashioned movie with a friend! Chill Greta, Chill!”

Again, Thunberg made it her Twitter bio: “A teenager working on her anger management problem. Currently chilling and watching a good old fashioned movie with a friend.”

Nearly a year later, on Nov. 5, as the presidency was slipping out of Trump’s hands, he tweeted “STOP THE COUNT!” Thunberg was there to dish some of Trump’s own words back at him:  “So ridiculous,” she tweeted. “Donald must work on his Anger Management problem, then go to a good old fashioned movie with a friend! Chill Donald, Chill!”

Now Trump has been kicked off Twitter. But on Wednesday, in the final hours of his presidency, Thunberg tweeted a photo of him boarding Marine One—and a final ripost: “He seems like a very happy old man looking forward to a bright and wonderful future. So nice to see!” The tweet has received more than one million likes.

‘If You Want Something Done for Kids, Ask a Mom’

For atmospheric scientist and mother of two girls Emily Fischer, a professor at Colorado State University, taking climate action is no different than taking her kids to the dentist. She sees both as part of her responsibility to protect her kids’ future well-being.

Fischer and five other scientists with children joined together to start the organization Science Moms, which launched a $10 million advertising campaign this month to educate other moms about the risks of climate change to children.

“If you want something done for kids, you ask a mom,” Fischer said. “So we want to help moms feel like this is their issue and they can talk about it, and they can reach out to their elected officials and push on this issue so that we have real science-based decision making and sufficient reductions in carbon pollution to actually address the issue.”

The advertisements are running on TV and online, including one that shows Fischer’s daughters playing outside, riding their bikes and learning to ski. In a voice over, Fischer talks about how much her family loves being outside and calls her climate change action “just an extension of being a mom.”

Living in the West, one consequence of climate change that Fischer is especially concerned about is wildfire. She worries that smoke from wildfires—which she researches—that are becoming more frequent and larger as global temperatures rise will affect her kids’ health.

“You can’t send your kids out to play; you’re constantly making decisions, like can they go to swim practice? Can they play outside?” she said. “Moms are having to make decisions like should I filter my air? All sorts of decisions, which in the context of Covid has been an additional burden.”

From Scientists, a Flashing Light to Alert the World

More than 111 aquatic societies representing 80,000 scientists working on all seven continents signed onto a statement this week, imploring the public and policy makers to take action on climate change.

The statement warns that aquatic ecosystems are some of the most severely affected by climate change. Freshwater ecosystems lost 83 percent of their biodiversity from 1970 to 2014 and scientists project that 90 percent of coral reefs will disappear by 2050, the statement said.

Scott Bonar, immediate past president of the American Fisheries Society, who coordinated the statement, said he has interacted with aquatic scientists all over the world who are witnessing climate effects in their own regions: flooding in the American Midwest; coral reef collapse off the coast of Australia; tropical fish appearing in fishing nets off the coast of Nova Scotia.

“We’re trying to warn people of the importance of taking climate change seriously,” Bonar said. “If they are interested in protecting and keeping our aquatic ecosystems intact, the time to act is now.”

The societies that signed onto the statement have traditionally avoided taking advocacy positions, Bonar said, but the gravity of the climate crisis has made scientists more willing to speak out.

He compared scientists to lighthouse keepers. When they publish research and findings, it’s like flashing the light to alert the world to what’s coming.

“Not only is the light going on and off, but we’re down there waving them off, yelling as loud as we can,” he said.

The statement outlines both the evidence that climate change is affecting aquatic ecosystems and the responses needed to address the crisis, including curbing greenhouse gas emissions and protecting ecosystems that serve as carbon sinks, like peatlands and sea grasses. 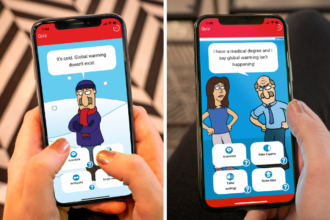