We already know that Covid-19 is leading to project delays and layoffs across the clean energy economy. Today, I’m going to zero in on what’s happening with some of the country’s largest wind, solar and battery storage projects that were previously scheduled to be completed this year.

I asked developers for updates. The companies that responded are reporting, at worst, small delays, which add up to no more than a few months of lost time.

This is good news, signaling that while the economic disruption caused by the virus is great, major projects are still going forward.

PacifiCorp, the utility developing the 503-megawatt TB Flats wind farm in Wyoming, says it is dealing with a delay of several weeks getting electronic equipment.

Spokeswoman Tiffany Erickson said the issue is “Covid-related,” part of a larger slowdown in getting parts delivered from overseas being experienced by many companies. But she said the delay is probably short enough that PacifiCorp has not changed its estimate that the wind farm will be complete in November.

In Wisconsin, completion of the 300-megawatt Badger Hollow solar farm is being delayed for four months, until April 2021, according to a regulatory filing by developers that I read about in the Wisconsin State Journal. The utilities developing the project said they can’t keep their previous timetable because of the way Covid-19 is affecting the availability of housing and other resources for workers traveling to southwestern Wisconsin to build the project.

Vistra Energy, the developer of the 300-megawatt Moss Landing battery storage project near Monterrey, California, says it remains on schedule.

“We expect to be online and energized in December 2020,” said Vistra spokeswoman Meranda Cohn in an email. “Thus far, there have been no delays in our project timeline related to Covid. While presently unanticipated, Covid-19-related delays could arise in the future.”

All these projects are huge and important for the transition to clean energy, but the Moss Landing project is in a category of its own. It would be the largest battery storage project in the world, with the ability to generate 1,200 megawatt-hours on a full charge.

Several other developers declined to comment or did not respond to inquiries.

This is all anecdotal evidence as we try to piece together what coronavirus means for the clean energy economy. I’ll let you know as I hear more.

The Federal Energy Regulatory Commission has largely affirmed its December ruling that states are distorting competition in the PJM Interconnection grid region by passing laws that subsidize certain types of power plants—often including nuclear and renewables—and not others.

That ruling will reshape the country’s largest wholesale electricity market in a way that will probably help fossil fuels by increasing the income that coal- and gas-fired power plants get in PJM’s “capacity market,” a system that pays power plants for agreeing to be available at times of high demand for an entire year.

This income, which is on top of what plants make from selling electricity in real time, can be the difference between profit and loss for some older coal and natural gas plants.

At the same time, the ruling probably will hurt nuclear, wind and solar facilities that receive state subsidies because it reduces their ability to make money in the capacity market by changing some of the conditions for participating. States can still provide subsidies, but the federal policy seeks to partially counteract their effect.

The new decision, issued through a 3-1 ruling last week, rejects the concerns raised by state governments, utilities and clean energy groups who were asking FERC to make changes and clarify some points in the December decision. This now sets up a battle in the courts over the limits of federal power as it relates to state energy policies.

The case affects the PJM Interconnection grid region, which stretches from New Jersey to the Chicago area and includes 65 million customers. But the outcome is even bigger than that, indicating a policy direction by FERC that has national implications, as I wrote in a December story about the initial ruling.

To understand what this means at a gut level, look at the new dissenting opinion written by Commissioner Richard Glick, the panel’s only Democrat, who said the majority’s decision shows “a degree of condescension that is unbecoming of an agency of the federal government.”

He also repeated his statement from December that the ruling was “illegal, illogical and truly bad public policy.”

In the new decision, the majority wrote that state aid for power plants “directly affects wholesale rates and practices” in the capacity market and therefore the states are incorrect to say FERC overstepped its jurisdiction. The larger point, in the majority’s view, was that state subsidies lead to unfair competition.

Critics of the ruling, including Glick, say this is little more than a subsidy for fossil fuel plants and an attempt to partially negate the wishes of state lawmakers who wanted to give a financial advantage to clean energy sources.

But what does all this really mean? I asked Madeline Fleisher, a Columbus energy and environmental attorney. She said the decision probably will help fossil fuel plants, since those are less likely to receive targeted state-level support. And it is likely to slow the transition to clean energy, although we don’t know how much or how this ruling will fit into the mix of other factors.

“Right now, no one really knows, which just makes things harder,” she said.

On Tuesday, the Natural Resources Defense Council, Sierra Club, Environmental Defense Fund and Union of Concerned Scientists said they are suing in an attempt to overturn the decision. This begins a court challenge that could take years to resolve.

“FERC overstepped its authority with this rule, intruding on the congressionally-established power of states to determine their own energy priorities,” said Tom Rutigliano, a senior advocate at NRDC, in a statement. “Its order overrides the choices of millions of voters and threatens to corrupt our power grid into a tool for subsidizing fossil fuel plants.”

If You Happen to Be Over the Atlantic and See Huge Wind Turbine Blades on a Boat, Here’s Why

One of the key milestones in developing offshore wind is “iron in the water,” which is when the turbines begin to be installed.

That moment is getting very close for Coastal Virginia Offshore Wind, a two-turbine project.

Dominion Energy and Ørsted said this week that some of the main parts of the turbines are in transit from a port in Rostock, Germany. The cargo vessels are now somewhere in the Atlantic as they make their way to Nova Scotia, and, eventually, Virginia.

This is a tangible sign that the developers were correct when they said a few weeks ago that the project was on track to be installed later this spring, despite the challenges of working around the coronavirus.

Coastal Virginia Offshore Wind would be the second offshore wind farm built in this country, following Block Island Wind Farm off of Rhode Island, which went online in 2016.

More importantly, the Virginia project is connected to the development of a 2,640-megawatt project—the largest in the United States—that would follow in nearby waters, also developed by Dominion and Ørsted. The two-turbine project will provide data that developers will use to figure out how to build the larger one more efficiently.

The turbine parts now traveling across the water are gigantic, with a rotor diameter of more than 500 feet, which is much larger than typical onshore turbine blades.

Thomas Brostrøm, CEO of Ørsted North America Offshore said in a statement that the impending delivery of the parts is a milestone, and the fact that it’s happening on schedule shows that the company is keeping the project “on time and on budget in spite of the disruption of global commerce.” 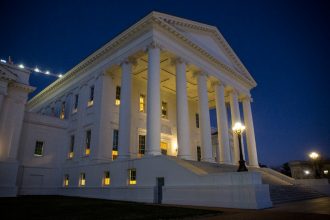 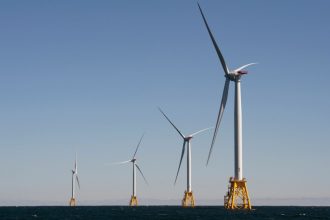