“Don’t mess with Texas,” says the advertising slogan that has grown into a defiant unofficial state motto.

After a recent historic vote to ban fracking in the college town of Denton—and industry’s lightning-fast response—the new refrain might read: “Don’t Mess With Big Oil and Gas.”

That’s the bottom line for business and legal experts who surveyed the landscape after 59 percent of Denton’s voters approved the ban.

Barely 13 hours after the polls closed on Nov. 4, oil and gas lawyers were in court, suing the town.

So, for that matter, was the state of Texas, where production of oil and gas reached $109 billion last year.

The overwhelming vote made Denton the first city to ban fracking in Texas, a state whose history, economy and culture are inextricably linked to oil.

“This is a shot across the bow of other cities that might be thinking of enacting similar kinds of legislation,” said Thomas McGarity, a University of Texas law school professor who specializes in environmental and administrative law.

“If you try to do something like this you’re going to get sued, too,” McGarity said.

The ordinance, championed by residents fed up with the industry, outlaws hydraulic fracturing, or fracking—in which sand, water and chemicals are pumped underground at high pressure to shatter the shale rock and release trapped oil and gas.

The ban is meant to address concerns about public safety and health issues associated with fracking: dangers associated with the venting of gas and disposal of toxic waste, as well as air pollution and water contamination.

Rhetoric leading up to the vote suggested that the ban would “shut down” some of the 281 gas wells operating in Denton. But the ban affects only new fracking and re-fracking of old wells after Dec. 2, when the measure goes into effect.

The Texas Oil and Gas Association called the ban unconstitutional in its lawsuit filed in Denton County District Court. The organization argues that the measure amounts to a ban on all drilling that denies mineral owners their property rights.

“The ban will result in the total inability to develop hydrocarbon interests within the city,” because fracking is the only way to get to the oil and gas locked in the Barnett Shale, according to the lawsuit.

The lawsuit makes the following assertions:

Neither attorneys for the association nor an organization representative returned calls for comment. The association says its members account for more than 90 percent of all crude oil and natural gas produced in Texas.

Alex Mills, president of the Texas Alliance of Energy Producers, said he doesn’t consider the litigation a warning of any sort.

“I see it as trying to protect the property owners’ rights and their right to develop their property,” he said.

Mills, however, acknowledged there is financial motivation.

“They [oil and gas developers] have a responsibility to their shareholders to protect the assets of the company,” he said.

The companion lawsuit was filed by Jerry Patterson, the commissioner of the Texas General Land Office, which manages state-controlled lands and mineral rights.

The agency oversees royalties from the state’s mineral rights that are used to help cover the cost of public education.

Consequently, Patterson argues in the lawsuit, the ban threatens millions of dollars in income for public schools.

“[T]his action affects every school child in Texas,” the lawsuit says. “The prohibition against hydraulic fracturing will completely destroy the value of the school kids’ minerals.”

In an interview with InsideClimate News, Patterson said the Denton lawsuit is nothing unusual: The agency often goes to court to protect its source of money.

“It’s my job to protect the revenue generated through minerals,” he said. “Sending a message isn’t the intent, but it could be collateral.”

Patterson said he doesn’t dismiss the concerns of Denton residents, but noted that oil and gas development is a cornerstone of Texas life that cannot dismissed because of the inconvenience it may bring.

‘Par for the Course’

Across the country, community fracking bans have been the target of lawsuits filed either by the industry, landowners or business owners with mineral reserves, or state regulators.

As in Texas, the fate of these bans has depended on the state and their rules relating to local control. This summer, New York’s high court upheld two bans in the towns of Dryden and Middlefield. Meanwhile, at least two Colorado towns have had their bans overturned this year and have filed appeals.

But the threat of a court fight hasn’t had a chilling effect on attempts to impose new laws regulating or banning fracking, Baizel said.

Fracking opponents instead have learned from the legal challenges, he said.

“They look how the challenges are framed and draft their legislation so that it has the best chance of standing up in court,” Baizel said.

First, it seeks to define who has the power to regulate the industry, the issue central to the litigation.

“Right now you have municipalities weighing in with regulations and you have the state asserting that it is the entity vested with regulatory powers,” he said. “It’s tough to conduct business in those circumstances. The question that has to be resolved is where does the regulatory power rest? The industry is looking for an answer to that question so it can move forward with a clear understanding of who sets the rules.”

Beyond trying to get a clear picture of where the regulatory authority rests, oil and gas developers are also making it clear they are prepared to fight for their financial wellbeing, Bullock said.

“This is the industry making a statement that it is prepared to protect its business interests,” he said. “It’s in their best economic interest to develop mineral resources without having to wonder what kind of new rules may dictate how they do business.”

Bob Percival, director of the environmental law program at the University of Maryland School of Law, said the Denton case is a perfect example of the industry’s fighting to protect its bottom line.

“When the industry has access to resources where they can make a lot of money they will do whatever they think is necessary to protect their right to develop that resource and take the resultant profit,” he said.

On the other side are people like Kathy McMullen, who are equally determined.

“We have a message for the industry: ‘We will fight,'” said McMullen, who is president of Denton Drilling Awareness Group, one of the organizations behind the ballot measure.

The industry had ignored residents’ plea to act responsibly and finally went too far a year ago when it sank a well less than 200 feet from a house where children lived, McMullen said.

“The state does a horrible job of regulating the industry and they sure won’t do it themselves,” she said. “We were left to fight for ourselves.”

McMullen said Denton residents aren’t intimidated by the lawsuits, and she hopes other communities in Texas and across the nation will become emboldened to fight by the resolve shown by her community.

“I don’t think they understand the will of the people,” McMullen said.

Then McMullen mentioned “flaring”—and it had nothing to do with the flare-up of opposition to fracking. She meant the brilliant orange flames seen during open-air burning of natural gas that can’t be processed. 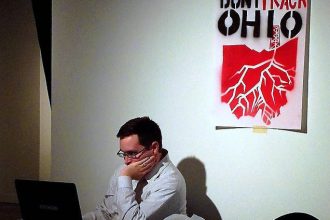 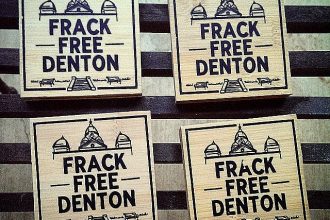