Melissa Miles has long thought the heavy traffic and abundant industry that surrounded her former neighborhood in Newark, New Jersey was to blame for her two young sons being diagnosed with asthma despite having no family history with the condition.

Three major interstate highways hug the borders of Ironbound, where Miles raised her two boys for nearly a decade. Then there’s the plastic factory that was about a mile and a half from her house, as well as the metal crushing plant just down the street. And that’s not to mention the interstate bus hub, the massive trash incinerator, the two fossil fuel power plants, the international airport and the regional shipping port that New Jersey shares with New York, which all sat within miles—if not yards—of her block.

In 2020, Miles moved to the more residential city of Summit, in part, to get away from all the pollution. But her time in Ironbound has spurred her to take on community organizing and fight what she calls an environmental injustice in cities like Newark.

Many residents point to those sources of pollution to help explain why Ironbound, and the rest of Newark, have an asthma rate that’s three times higher than the national average. According to the Environmental Protection Agency, one in four children in Newark have the condition. The city is also more than 70 percent people of color, with more than a quarter of its residents falling below the federal poverty line.

Ironbound has “something like 40 percent of the state’s major air facilities in like five square miles,” Miles said, referring to facilities that are considered major sources of pollution under the Clean Air Act. My sons “will never be rid of the impacts of having lived their early years in a neighborhood that’s overburdened by pollution like that.”

So, in December, when New Jersey, New York and Massachusetts all adopted California’s Advanced Clean Truck rule, or ACT, many environmentalists celebrated the news. The rule requires automakers in those states to sell an increasing number of electric freight trucks, buses and tractor trailers, starting in 2025. Lawmakers hope by making more electric medium- and heavy-duty vehicles available, it will help to phase out dirtier diesel-powered ones. Automakers must increase their zero-emission truck sales in those states by between 30 and 50 percent by 2030, and 40 and 75 percent by 2035.

While diesel vehicles make up only a fraction of the nation’s overall fleet, they account for more than 60 percent of harmful tailpipe pollution like nitrogen oxide and particulate emissions, a recent report said. And a growing body of evidence shows that diesel pollution has an outsized impact on communities of color and low-income neighborhoods—which often sit side-by-side with industry and heavily trafficked highways. Those findings suggest lawmakers can target diesel emissions as one way to help reduce the nation’s persistent environmental disparities.

Six states have adopted the ACT rule so far—Washington and Oregon also approved the measure earlier last year. Altogether, implementing that rule in those six states will impact 20 percent of the nation’s trucking fleet, said Patricio Portillo, a transportation analyst with the Natural Resources Defense Council, a clean energy advocacy group. And other states may soon follow, with Colorado, Maine, Connecticut and Vermont all signaling that they’re exploring the option.

“This is a big deal,” Portillo said. “It has the potential to move a global industry in the direction that we want it to go.”

Still, many environmental justice activists, including Miles, say that while adopting the California clean truck rule is a good start, it doesn’t go far enough to specifically help communities like Ironbound, which have long borne the brunt of the state’s industrial pollution.

“The ACT rule is about saying—by a certain date—there should be more electric trucks on the market, in the parking lots, encouraged to be sold,” said Amy Goldsmith, New Jersey state director of Clean Water Action, another environmental advocacy group. “But it doesn’t require anybody to buy them and it doesn’t take diesel trucks off the road.”

While ACT will help phase in electric trucks over a longer period of time, many environmental justice communities sitting closest to major truck routes will continue to suffer in the short-term from the nation’s toxic diesel emissions, Goldsmith said.

Newark is a prime example. The city shares a major shipping port with New York, and the Jersey side sees more than 20,000 trucks drive through it every day, Goldsmith said.

In fact, the three Jersey counties that contain the port’s facilities, Essex, Hudson and Union, are also the three most polluted by diesel emissions in the state, according to EPA data compiled by the Clean Air Task Force, an organization that has fought for decades to reduce the nation’s air pollution. That pollution results in nearly $1 billion of additional annual health costs across those counties, the data shows.

That’s why advocates like Goldsmith and Miles are pushing their state officials to adopt stricter regulations that would reduce diesel pollution sooner. One possible rule would be patterned on California’s Heavy-Duty Omnibus rule, which toughens emission standards for new trucks that still run on diesel, which is anticipated to make the trucks in California 90 percent cleaner, once fully implemented in 2027.

So far, only Oregon and Massachusetts have adopted the rule outside of California, and it’s unclear how much traction the measure will gain in other states—though some state officials, including in Washington, have said they’re exploring the option.

Miles, who became executive director of the New Jersey Environmental Justice Alliance in 2020, said she would also like to see state lawmakers adopt new policies that would specifically target environmental justice neighborhoods, like Ironbound, such as by creating mandatory emissions reduction zones. It’s unclear if any such measures have gained traction in New Jersey or other states.

The Port Authority of New York and New Jersey, the agency that runs the Newark airport and the shipping ports on both sides of the bay, could also implement its own rules to require drivers entering the port to have newer engine models that pollute less. The agency had initially promised to adopt such a measure but reneged on the pledge in 2016.

Industry groups, like the Truck and Engine Manufacturers Association, have expressed opposition to both the ACT and Omnibus rules, saying the regulations will push unnecessary costs on truck makers and drivers, who will instead seek business outside the states that have adopted them.

“We fear that jobs, the economy, and the environment all will be at risk as truckers buy vehicles out of state, dealers lose sales and the state loses jobs and tax revenue,” Jed Mandel, the association’s president, said in a press release shortly after California passed the rules in 2020.

Still, Portillo sees the momentum behind the ACT rule as a positive development of things to come, especially as the federal government considers updating its own medium- and heavy-duty emissions standards. The EPA began reevaluating those standards in 2018, and advocates expect a ruling on them sometime this year.

“The timing is huge because right now we have a federal rulemaking that’s going to get kicked off, probably in the next month or so,” Portillo said. “The more states that are following this ambitious strategy that California has laid out, the greater the likelihood that we’ll get a national standard that’s very similar to what these states are doing.” 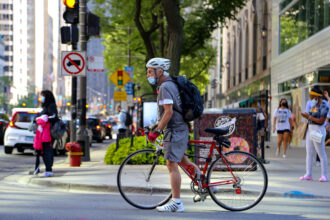