The Environmental Protection Agency on Thursday expanded the opportunity for vocal critics to object to a controversial proposal that would restrict the types of scientific research the agency can draw on when writing regulations.

In a concession to scientists, environmentalists and lawmakers, the agency announced it would extend a public comment period on the proposed rule until mid-August and hold a public hearing in July.

Some of the nation’s leading scientific groups and hundreds of public health scientists and professionals have warned the rule would harm public health by prohibiting the EPA from using major health studies that promised participants confidentiality.

The proposal was published for public comment on April 30. The EPA is required to consider the comments when writing the final regulation.

With the comment period extended into August, those scientists will now have an additional two and half months to build a case against the proposal.

“EPA is committed to public participation and transparency in the rulemaking process,” said EPA Administrator Scott Pruitt in a statement. “By extending the comment period for this rule and holding a public hearing, we are giving stakeholders the opportunity to provide valuable input about how EPA can improve the science underlying its rules.”

The policy reflects changes sought for decades by fossil fuel companies and other industries. It is aimed particularly at widely confirmed epidemiological studies that underpin regulations on emissions of smog and soot from burning fossil fuels. The health benefits of reducing those forms of pollution are often cited as co-benefits of controlling emissions of greenhouse gases.

Even before the official announcement was made, scientists and public health advocates expressed strong opposition. In a letter to Pruitt, the American Geophysical Union, which represents 60,000 scientists, said that “to exclude vital scientific information from consideration would put our local communities’ health and well-being at risk.”

A group of nearly 1,000 scientists, including former EPA employees, wrote a letter urging Pruitt to abandon the proposal, saying it “would negatively impact EPA public protections that reduce levels of lead, harmful chemicals, and fine particle pollution, among others.”

Editors and publishers of the leading scientific journals also criticized the proposal. Rush Holt, chief executive of the American Association for the Advancement of Science and the executive publisher of the Science journals, issued a statement in April saying, “this proposal appears to be an attempt to remove valid and relevant scientific evidence from the rule-making process.”

Earlier this month, a 10-member working group of EPA’s Scientific Advisory Board—including four members appointed by Pruitt—published a memorandum saying the rule was proposed without the necessary scientific input and calling for the full board to review it at its May 31 meeting.

The agency originally offered a 30-day comment period for the rule, and planned to hold no public hearings. Many critics, including hundreds of public health scientists, some environmental groups and 20 senators asked the agency to extend the period, calling 30 days extraordinarily short for such a significant change.

The public comment period will now last through August 17. Comments can be submitted at this federal website. The public hearing will be held July 17 at EPA headquarters in Washington, D.C. 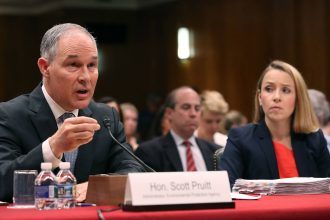