As New York Gov. Andrew Cuomo stepped down following a report from a state investigator that concluded he had sexually harassed 11 women, many environmental activists applauded the governor’s decision and said his administration had heeded special interests far too often when it came to passing climate legislation.

Even the state’s landmark climate law, which requires New York to decarbonize its power sector, drastically reduce overall greenhouse gas emissions and significantly ramp up renewable energy development, was something Cuomo was reluctant to get behind.

In the weeks leading up to Cuomo signing the bill into law in the summer of 2019, the three-term governor originally told local media outlets he wouldn’t back the measure, even as it gained broad support in the state legislature. That prompted hundreds of activists to march on Cuomo’s office, demanding he change his mind.

Activists marched on the governor’s office again the following year after Cuomo touted his $33 billion “climate budget,” which critics were quick to point out contained only $3 billion in new money to pay for a narrow scope of climate initiatives. For years, Cuomo had pledged to not raise taxes, but activists say without new revenue streams, the goals in the state’s climate law are simply unattainable.

The Cuomo administration has had some major climate victories, including denying the controversial Williams Northeast Supply Enhancement pipeline that would have carried fracked natural gas from Pennsylvania to New York. But some advocates say that Cuomo has put up “Olympic hurdles” for the passage of measures they say are necessary for the state to meet its climate targets while also protecting New York’s most vulnerable populations.

By law, New York must transition its power sector to net-zero emissions by 2040 and reduce the state’s overall greenhouse gas emissions 85 percent below 1990 levels by 2050. The law also requires the state to invest at least 35 percent of the “overall benefits” from clean energy and climate initiatives in “disadvantaged communities.”

This summer, the state began developing its long-term plan that will act as the road map for how it will achieve its lawfully binding climate targets. But many details for the plan—such as which policies state agencies will adopt, how they’ll pay for them and who they’ll benefit most—have yet to be decided, and Hochul will likely face some challenging political fights ahead.

Some of the more progressive policies being considered, such as a carbon fee and banning natural gas in new buildings, have been at the center of political fights across the country. Last week, California updated its building code without banning gas in new construction, a move that surprised many clean energy advocates who thought the state would likely become the first one to impose such a measure.

Hochul now has the opportunity to lead New York to the front of the pack in climate policy and even influence national legislation, said Peter Iwanowicz, executive director of Environmental Advocates NY and a member of the New York Climate Action Council, the 22-member committee charged with developing the plan.

“Where New York goes, national policy will go,” he said. “And where U.S. policy goes will signal how serious the world’s leaders are about actually addressing climate, rather than talking about addressing climate.”

Can Hochul Get New York Back on Track?

For more than a year, the New York Climate Action Council has been meeting with its eight advisory panels to brainstorm ways to slash the state’s greenhouse gas emissions. So far, dozens of recommendations have been put forward, including banning natural gas in new construction, adopting more stringent building codes, phasing out the sales of gasoline and diesel powered cars, investing billions of dollars in electric vehicle charging stations and implementing a carbon fee on polluting industries.

But last month, the group met online to discuss the initial findings of an independent analysis that aims to evaluate how effective any given policy would be, and the results were sobering.

“If you take all of those recommendations and put them into the analysis, we’re not meeting the goals,” said Anne Reynolds, executive director for the Alliance for Clean Energy New York and a member of the climate council.

Besides showing support for adopting new energy efficiency codes in buildings, Hochul has made few public statements on whether she’ll support any of these recommendations, which now fall on her as governor to sign into law or direct agencies to adopt as new rules.

Hochul, a moderate Democrat from the Buffalo region, has in the past supported oil and gas drilling in New York, as well as the Keystone XL pipeline. That record doesn’t necessarily line up with the progressive policies the state would need to adopt to achieve its climate targets, said Iwanowicz, who was a former acting commissioner of the Department of Environmental Conservation.

But public perception around climate change and fossil fuel development has changed significantly in the state in the past decade, he added, so Hochul should be given the benefit of the doubt that she’s open to progressive policy.

One bill that could see some traction under Hochul is a measure that the New York legislature passed back in April and that appeared to have some support from Cuomo, Reynolds said. That legislation, which now goes to Hochul’s desk, would require all new sales of passenger cars or trucks to be zero-emissions starting in 2030, with medium and heavy-duty trucks to be zero-emissions by 2045.

Some analysts and environmental activists have also speculated that Hochul could be more receptive to a carbon fee, which many advocates have said is the only way the state can properly pay for the efforts to decarbonize its economy.

In 2018, the New York Independent System Operator, which oversees the state’s electricity supply, proposed a carbon pricing scheme that would have charged New York’s power plants for their carbon emissions to help pay for the state’s climate initiatives and entice more renewable energy development. Cuomo rejected that proposal.

A rival proposal from legislators that is backed by a coalition of over 200 organizations has been introduced every year since 2018. That measure, called the Climate and Community Investment Act, would charge the power sector $55 per ton of greenhouse gas emissions, and proponents say it would raise about $15 billion per year over the first 10 years. That bill has yet to make it out of committee hearings.

In January, Hochul will propose her first budget as governor, and just how she chooses to pay for the state’s climate initiatives will be an early indicator of how aggressive her administration plans to get on climate policy, Iwanowicz said.

“She’s going to have to reorient the entire state budget to make sure it aligns with the climate law,” he said. “You have to look out for the interests of 20 million people. She knows what she’s signed up for.”

New York’s climate law requires the state “to invest or direct resources in a manner designed to ensure that disadvantaged communities receive at least 35 percent, with the goal of 40 percent, of overall benefits of spending on” clean energy, energy efficiency and other climate-related projects.

But the language of that provision, which advocates have criticized for being too vague, leaves a lot of room for interpretation, including what the state defines as “benefits” and which communities it views as “disadvantaged.”

The original bill used the word “investments” before the Cuomo administration changed it, said Eddie Bautista, executive director of the New York City Environmental Justice Alliance and a member of the Climate Action Council’s advisory committee dedicated to environmental justice. Measuring the percentage of a dollar amount is simple, he said, but “agencies don’t know how to calculate what a benefit is.”

It’s an example of the “Olympic hurdles” the Cuomo administration has put up that could ultimately hurt low-income and minority communities the most as the state develops the details of how it will achieve its climate targets, Bautista said.

A growing body of research has shown that poorer neighborhoods with a higher percentage of Black, Indigenous and other people of color are more likely to be located near hazardous waste sites, suffer more frequently from polluted air and are hit hardest by climate change and Covid-19.

The advisory committee Bautista sits on will play a big role in how the state inevitably defines “benefits” in its climate law. Already the committee has adopted an interim definition for “disadvantaged communities,” relying heavily on criteria from federal opportunity zones and setting income thresholds based on federal public housing programs data.

“The ball is in her court now to demonstrate her commitment and resolve to implement New York’s climate law that leads us to the pollution reductions we need, but also ensures that we have equity and justice for frontline communities,” he said. 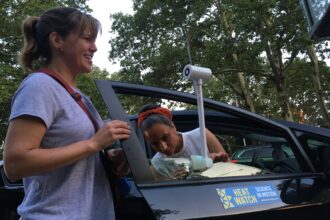 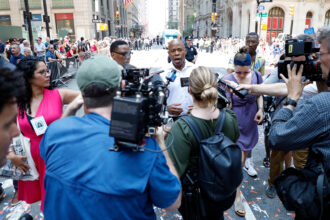 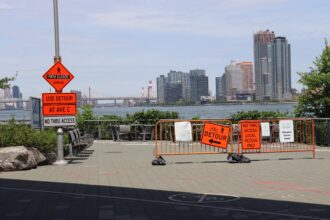