When New York Gov. Andrew Cuomo unveiled a state budget proposal that earmarked $33 billion for green energy and conservation, he hoped to solidify New York’s reputation—as well as his own—as a national leader in the fight against climate change.

But the announcement in January was followed by a week of protests at the State Capitol, where hundreds of people, including members of advocacy groups and a handful of lawmakers, gathered to criticize the governor’s proposal, saying the budget merely repackaged already dedicated funds under the banner of climate action and fell short of what’s needed for the state to meet its highly ambitious climate targets.

“Sure, $33 billion sounds impressive, but it is in large part a restatement of funds that have already been allotted,” said Patrick Houston, a climate activist with the advocacy group New York Communities for Change. “It’s not new money.”

New York hopes to transition its power sector to net-zero emissions by 2040 and reduce the state’s overall greenhouse gas emissions by 85 percent from 1990 levels by 2050—goals that Cuomo signed into law last July.

But getting there is expected to be difficult, and expensive. And some activists are calling for a state Green New Deal as the most viable option moving forward, with the state taxing top income earners to pay for clean energy development projects that prioritize benefiting vulnerable communities. Others are calling for the legislature to pass a carbon and pollution tax to help pay for the state’s environmental initiatives.

At a recent press conference in Manhattan, Cuomo hoped to quell some of those criticisms, saying his budget was only the start, and that New York would show other states that “it can be done” by embarking upon “the most ambitious climate change program that any state has ever undertaken.”

In an interview, a Cuomo spokesman said the administration was open to talks about new revenue models. However, the governor has said publicly that his budget wouldn’t include new taxes.

Under Cuomo’s budget proposal, the $33 billion would be spread out over five years to support the transition to renewable energy sources like solar and wind power, and to increase investments in electric vehicles, wildlife revitalization and flood resilience.

The vast majority of the money—more than $28 billion—comes from ratepayers, existing investment programs and a multi-state carbon fee program that New York participates in called the Regional Greenhouse Gas Initiative (RGGI).

The only new revenue would be $3 billion from a proposed bond act. That measure, called the Restore Mother Nature Bond Act, would have to be approved by New York voters in November and if passed, would be used to specifically address wildlife and flood resilience.

“We were initially pleased that the budget allocates funding and commitment to climate change, but when you really dig into the details, most of the rhetoric around the $33 billion doesn’t really match the reality,” said Priya Mulgaonkar, policy organizer for the New York City Environmental Justice Alliance.

Mulgaonkar’s group is one of roughly 200 local organizations now demanding that Cuomo find a way to allocate $1 billion in new revenue to help jump start the state’s climate initiatives. The groups also say that New York needs to find a reliable and dedicated revenue source to ensure the state can continue its climate work and achieve its goals on time. They also want binding commitments that any state-funded climate programs will benefit New York’s most vulnerable communities.

For that, they’re calling on state lawmakers to pass a carbon and pollution tax that they say would bring in $7 billion to $10 billion annually. A version of that tax legislation was introduced in 2018 and 2019 but never made it out of committee.

The proposed legislation wasn’t the first time the state toyed with the idea of a carbon tax. In 2018, the New York Independent System Operator (NYISO), which oversees the state’s electricity supply, proposed a carbon pricing scheme that would have charged New York’s power plants for their carbon emissions to help pay for the state’s climate initiatives and entice more renewable energy development. That, too, gained little traction, although NYISO is still pushing for it.

As for the regional carbon pricing program RGGI, of which New York has been a member since 2009, revenue from the initiative has helped the state raise more than $1.2 billion to go toward renewable energy and energy efficiency projects, among others.

The cap-and-trade program requires electric utilities to purchase credits that enable them to emit carbon dioxide up to a specified ceiling, or cap. Companies that reduce their emissions below the cap are then allowed to sell or trade their allowances in online auctions to other companies that have not reduced emissions.

Still, some activists have criticized both NYISO’s carbon pricing proposal and RGGI as not going far enough, if New York is to meet its goals. They’re calling for a broader, economy-wide carbon tax that wouldn’t be limited to the state’s power sector.

If New York were to adopt a broader carbon tax, it would follow California’s lead.

California is the only state that has passed such a tax that is not limited to the electricity sector. The state’s cap-and-trade program, which began in 2013, applies to electric utilities, industrial emitters, transportation fuels and natural gas.

That initiative has raised over $12 billion for the state, said Chris Busch, an expert in California climate policy and the research director for the clean energy think tank Energy Innovation.

California has also raised its gas tax twice since 2017, in part to address the state’s transportation-related carbon emissions. That alone is expected to bring in about $5.4 billion in additional transportation funding each year, some of which goes to the state’s electric vehicle initiatives.

States hardly ever use direct government spending to pay for climate initiatives, relying instead on ratepayers for funding, Busch said, because the money supports transitioning electricity production to cleaner energy sources.

In California, he said, “Rooftop solar was supported initially through incentives under the California Solar Initiative, but that support was wound down long ago. He added, “Today, homeowners and third-party financiers are providing the capital for rooftop solar installation.”

Still, activists—along with a handful of state lawmakers—say that without additional revenue sources, such as an income tax on high earners or a carbon tax, New York simply can’t reduce its emissions fast enough to meet its goals and avoid climate catastrophe.

By current metrics, the state has a long way to go.

Under the state’s new climate law—known as the Climate Leadership and Community Protection Act (CLCPA)—New York’s first task is to get 70 percent of its electricity from renewable sources in just 10 years. As of 2018, solar and wind made up only 5 percent of the state’s electricity supply, according to NYISO.

The state has also made relatively slow progress on reducing greenhouse gas emissions and by 2016 had only reduced emissions by 13 percent from 1990 levels, according to the New York State Energy Research and Development Authority.

Until lawmakers dedicate new funding to combat climate change and help low-income and vulnerable communities, Mulgaonkar said the hundreds of member groups in her coalition plan to continue showing up at the State Capitol.

“It’s not enough to repackage existing funds with a climate justice branding,” she said. “We need to have new, concerted funds to actually implement the CLCPA equitably. And we need to start now. We can’t wait any longer.” 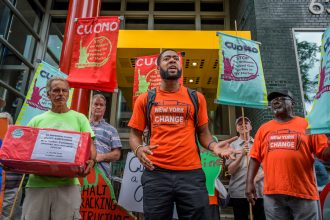 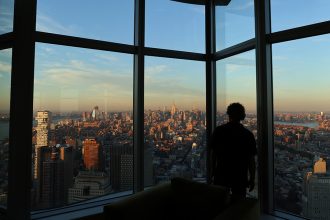 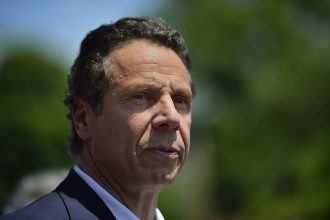