This opinion column was originally published by The Tyee.

The tugboat Nathan E. Stewart and barge DBL 55 were traveling back down the B.C. coast after delivering petroleum products in Ketchikan, Alaska in the early morning Oct. 13.

The tug passed the Ivory Island lighthouse, 11.5 kilometers north of Bella Bella, where its crew should have made a gentle turn to the southeast, passing easily between the rocky reef off Athlone Island and the mainland.

Instead, according to a record of the vessels’ GPS path from MarineTraffic.com, it plowed straight ahead at 9.4 knots. The tug scraped hard on the reef, tearing open two of its fuel tanks and spilling diesel into the cold seawater. It was 1:13 a.m.

Coast Guard vessels responded quickly to rescue the seven-person crew and provide assistance. By first light, boats from the Heiltsuk First Nation were on the scene, along with a small crew subcontracted by Western Canada Marine Response Corporation (WCMRC), the industry-owned private company responsible for oil spill cleanup along the B.C. coast. The company’s workers deployed four 50-meter booms around the stranded tug and helped pump 6,554 liters of fuel from the tug into an empty tank on the barge. It was 10 hours after the crash before the first containment booms were effectively in place.

That afternoon a set of  booms, each about a 1,000 yards long, were deployed across the mouth of Gale Creek in an effort to slow the slick’s spread. They were pulled apart by strong currents and didn’t last the night.

A double boom system with absorbent pads is mostly containing the slick around the tug. Replacement booms across Gale Creek are holding. The bulk of the spill—which was never contained—continues to spread.

In theory, marine diesel’s lightweight, thin consistency should make it easier to clean up than bunker fuel or bitumen. It typically floats on top of water, creating a sheen only a few microns thick. The U.S. National Oceanic and Atmospheric Aministration notes that diesel is often broken up by wave action in a few weeks or months, and particles are pushed deeper into the water column to be broken down by microorganisms.

For cleanup crews, that might be comforting. For the Heiltsuk, it is devastating.

The Heiltsuk rely on these waters for sustenance and income, and this spill occurred over the site of their commercial clam fishery and during their annual sea cucumber harvest. The sale of clams alone generates around $150,000 a year. Five days after the spill, the federal Department of Fisheries and Oceans ordered an emergency closure for shellfish and sea cucumber harvesting. It is unknown when they will open again.

The effects aren’t just environmental and economic. There are also human health impacts to worry about.

In the “world class” oil spill response system touted by Canadian politicians, local volunteers are still putting their bodies on the front line.

The only marine spill response crews are stationed in Prince Rupert and Richmond/Victoria. Crews called down from Prince Rupert had to travel nearly 200 miles to reach the spill site, a trip that took nearly a day.

While management and planners from WCRMC, contracted salvage companies and Kirby Offshore Marine, the tug’s Texas-based owner, were able to fly up before a wave of storms hit, technical staff and specialized equipment were stuck in transit, finally arriving Sunday night.

In their absence, Heiltsuk volunteers, including elders and hereditary chiefs, stepped in. Since the spill began, they’ve worked virtually non-stop to help secure the tug, maintain booms and survey shorelines.

And yet, according to a person involved in the effort who asked to remain anonymous, they were not offered protective gear until more than 24 hours had passed. (The Coast Guard gave them gloves to protect their hands.) It took until Saturday before someone remembered there was safety gear stowed on the DBL 55 barge—including respiratory protection—and made it available.

Jess Housty, elected council member for the Heiltsuk Tribal Council, says it is hard to determine how many people are experiencing adverse symptoms from the spill.

“We know there are people who’ve had headaches, irritation in their noses and lungs since day one,” says Housty. “They’re not reporting them because they don’t want to be told they can’t go out and help anymore. They can’t imagine being anywhere else.”

The Unified Command—a group comprised of the Heiltsuk First Nation, the provincial government, Kirby and the Canadian Coast Guard—has told kids under 14 that they can’t go on crews anymore. “It’s been heartbreaking for the kids, they feel like they’re able-bodied, they’re passionate and and they’re scared,” Housty said. “We don’t want to tell them they can’t go out, but we need to protect their health.”

The crews are now focused on preparing the tug for refloating, a dangerous and complicated effort. A process called hot tapping, in which divers use underwater drills and pumps to extract the remaining diesel and oil from the sunken tug, has been under way since last Monday night. It takes 40 to 50 hours to complete, but it was halted as a major storm rolled in. Should the tug stay in place during the storm—and there’s a chance it won’t—efforts will begin again when the weather improves.

At the moment, much is still unclear, including the cause of the accident.

The Nathan E. Stewart regularly carried loads of liquid petroleum products from the south coast to ports in Alaska. Due to its relatively small load, the Pacific Pilotage Authority allowed the vessel to travel up and down B.C.’s rugged and unpredictable coast without a certified marine pilot. That waiver has been rescinded, pending an investigation.

Over the last few days Transport Canada and Kirby Offshore Marine officials have conducted interviews with the seven crew members of the Nathan E. Stewart.

According to the Heiltsuk, they have refused to share their findings with the other members of the Unified Command, and have told the Heiltsuk that they cannot conduct their own interviews unless individual crew members consent.

In response, the Heiltsuk have launched their own investigation, soliciting impact statements from community members and pursuing rigorous environmental monitoring.

Housty, like many of the people working on this spill, is exhausted and frustrated, particularly with the lack of response from politicians. While Prime Minister Justin Trudeau evaded making a firm promises when asked about the spill and his plans for a tanker ban, B.C. Premier Christy Clark attacked the federal government  for its “totally inadequate” spill response.

Housty says neither of their words are enough.

Nearly a week after it sank, the Nathan E. Stewart’s stern still rests on the bottom in 30 feet of water. Its diesel fuel slick still coats large swathes of Seaforth Channel. It has polluted tide pools, shoreline grasses and vital fishing grounds.

Late Wednesday night, elected Heiltsuk chief Marilyn Slett tweeted that one of the boats assisting in the cleanup had sunk as well.

What remains are questions about how the accident happened and what it says about the spill response plans that were so complicated by weather, bureaucracy and distance. 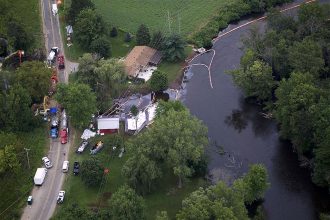 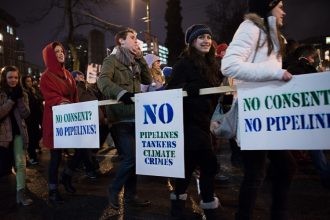 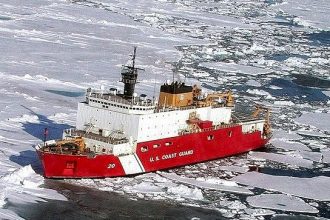