Chevron bosses are facing shareholders for the first time since the company was fined a total of $18 billion by a court in Ecuador over contamination from oil extraction in the Amazon. California’s largest oil company is coming under increasing pressure from institutional investors and long-term shareholders who are gathering at the annual general meeting at Chevron’s HQ in San Ramon, near San Francisco.

A judge ruled in February this year that the company was liable to pay $8.6 billion in damages, mostly to decontaminate polluted soil. The judge also awarded $860,000 to plaintiffs and a further $8.6 billion in punitive damages. Chevron has appealed the decision, which amounts to the largest award in corporate history, exceeded only by BP’s $20 billion compensation fund after the Gulf oil spill.

The New York State Common Retirement Fund — which manages $150 billion of state government pensions — has filed a resolution calling on Chevron to appoint an independent board member with environmental expertise.

Pat Doherty, director of corporate governance at the New York State office of the state comptroller, said: “The fact that Chevron didn’t have someone with this expertise on the board probably helped contribute to the problem. We’re suggesting that Chevron’s take no prisoner approach has arguably also made things worse.”

Chevron acquired Texaco in 2001, inheriting its liabilities for alleged substandard oil extraction in Ecuador’s rainforest between 1964 and 1992. The company no longer extracts oil in Ecuador, but has operations in Argentina, Brazil, Colombia and Venezuela. It has admitted in court documents that enforcement of the penalties by the seizure of assets in these countries would bring “irreparable harm” and disrupt its supply chain.

Chevron also now faces scrutiny by the Securities and Exchange Commission after Trillium Asset Management, a Boston-based sustainable and responsible investment fund, filed a request this week to review the company’s shareholder disclosures on the magnitude of its financial and operational risk.

Shelley Alpern, vice president and director of ESG research and shareholder advocacy at Trillium, said: “The Ecuadorian courts are but one step away from seizing Chevron’s assets to pay for the record $18bn judgment. It doesn’t seem unreasonable to hope that a settlement agreement might be brokered that comes in below this extraordinary amount, puts funds to work immediately restoring the polluted areas, and helps Chevron put this reputational disaster behind it.”

A delegation from the affected region in Ecuador is due to attend the AGM, alongside 22 proxy voters. Humberto Piaguaje, a leader of the Secoya tribe in the Ecuadorian Amazon, said: “We have fought for nearly 20 years to bring Chevron to justice, and finally we have a court judgment that affirms what we have been saying all this time.

“The court, which Chevron chose, found them guilty of poisoning our rainforest, and our families. With this verdict, we have come north to demand that Chevron cease its lies and pay to clean up the contamination that is choking our communities.”

Chevron continues to aggressively deny liability. The company said: “Chevron has appealed because the judgment was procured by fraud and because the Ecuadorian judicial system failed to afford an impartial tribunal and due process.

“The plaintiffs’ representatives have colluded with the court and its experts, fabricated evidence, falsified reports, and forged signatures. Chevron acknowledges that the people of Ecuador’s Amazon face legitimate challenges. But a fraudulent lawsuit is not a solution.” 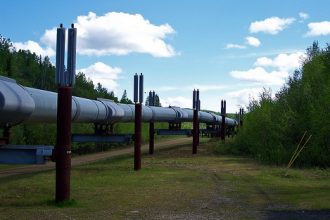 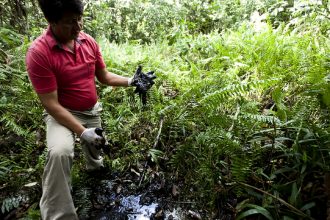 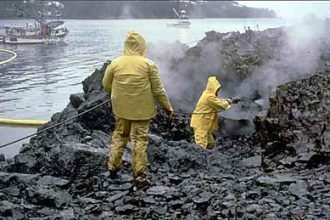