The acting chief of the National Oceanic and Atmospheric Administration proposed removing the word “climate” from the research agency’s mission statement, the latest maneuver in the Trump administration’s wide-ranging effort to downplay federal work on climate science and limit the public’s access to it.

The proposal drew swift condemnation from scientists. “Redefining @NOAA’s mission is a serious threat to the breadth of science, services and stewardship that NOAA provides,” tweeted the former head of NOAA Jane Lubchenco.

The proposed revision was unveiled by Acting Under Secretary of Commerce for Oceans and Atmosphere Timothy Gallaudet in a PowerPoint presentation he used at a “vision setting” summit last week of the Commerce Department, which houses NOAA. After the response from scientists and questions from the media, Gallaudet walked back the proposal through a statement issued by the NOAA press office.

In another shift, the missions of protecting coastal resources and ecosystems would be replaced with “to protect lives and property, empower the economy, and support homeland and national security.”

NOAA’s research on climate change and its effects is used by cities, states, farmers, the country’s national security apparatus, businesses and universities, said Andrew Rosenberg of the Union of Concerned Scientists and a former NOAA staffer who obtained the PowerPoint and shared it with the media.

Environmental and science advocates called the shift among the starkest examples to date by the Trump administration to undermine federal work on global warming. President Donald Trump and many of his top advisers deny manmade climate change, which has led to his high-profile decisions such as pulling the United States out of the Paris climate agreement and scrapping the Clean Power Plan.

But in smaller yet still meaningful ways, the administration has worked from the outset across federal agencies to strip mention of climate change and curtail work on it, according to watchdog groups such as the Environmental Data & Governance Initiative (EDGI).

In December 2017, for instance, the administration dropped the mention of climate change as a global threat from its National Security Strategy document. Also in December, the Interior Department issued a secretarial order halting efforts on public lands to adapt to climate change.

Joel Clement, a whistleblower who was formerly director of its office of policy analysis, accused the Interior Department of reassigning him to an obscure accounting post as retaliation for speaking out about the threats manmade climate change poses to Alaskan villages. In August, the administration disbanded a federal advisory panel that helps government and corporate officials incorporate climate research into planning. And in April 2017, the Environmental Protection Agency scrubbed from its website “extensive information on the EPA’s work to mitigate climate change, as well as details of data collection efforts and indicators for climate change,” according to EDGI.

Afterward, Gallaudet Walks It Back

Through the NOAA press office, Gallaudet issued a statement that walked back the proposed changes in his presentation.

The PowerPoint “was intended to share new ways NOAA could augment the DOC’s [Department of Commerce] strategic plan. It was not intended to exclude NOAA’s important climate and conservation efforts, which are essential for protecting lives and the environment. Nor should this presentation be considered a final, vetted proposal,” the statement said.

Rosenberg said he welcomed Gallaudet’s comments but remained unconvinced. “He says it’s not a change. But when I see past and present and the words are different, that is fundamentally a change.”

Congress Would Have a Say in Changes

Some aspects of shifting NOAA’s work away from climate change would require Congressional action.

At least five different laws among the many that guide NOAA’s research give it explicit instructions to engage in various aspects of climate change, such as leading an interagency research task force, monitoring conditions in the Arctic, addressing ocean acidification, and handling direct climate observations. Just as important is its central role in communicating the science objectively to the public.

But NOAA’s leadership, now answering to the Trump administration, could still diminish the agency’s climate work by articulating different priorities as Gallaudet did, Rosenberg said. “NOAA’s leaders are communicating down through the agency what their priorities are and that’s important,” he said.

For example, slide 8 of the presentation lists 2018 priorities, including improving “severe storm predictions,” but without any mention of climate change. “What puzzles me is how do you do these things without taking climate into account?” Rosenberg said. “Pretending it doesn’t exist means you can’t carry out your services for the American people.” 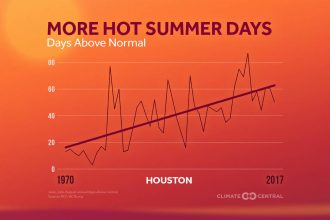 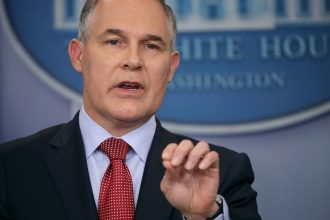 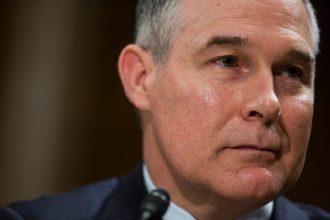