Jane Kleeb is the founder of Bold Nebraska, a grassroots group that opposes the Keystone XL pipeline.

Before I left for Climate Week in New York, I was with a room full of volunteers in Nebraska, painting buffalo hides. Our painting was part of an honoring that will take place with Willie Nelson and Neil Young at the Harvest the Hope concert Sept. 27.  The ceremony and the concert will be held near Neligh, Neb., directly on the proposed route of the Keystone XL pipeline.

The next day, I stood with the Cowboy and Indian Alliance—a group of farmers, ranchers and tribes opposing Keystone XL—in New York to ask for permission to be on the land of the Shinnecock Nation, through a water ceremony and exchange of gifts.

We marched proudly in the streets, holding flags, banners and signs from pipeline fighters back home. I marched with a flag displaying my husband’s family cattle brand, to make it clear I was there standing with folks who have deep roots to the land and will not let TransCanada or anyone else think they can walk all over our families.

As I marched in the street, instead of looking up at the massive buildings in New York, I was looking down to see the shoes of all those people marching against climate change and tar sands. Cowboy boots, moccasins, sneakers, work boots and, yes, Birkenstocks. It will take all of us marching together, not only in the streets, but also straight to the voting booth on Nov. 4.

We call ourselves pipeline fighters, and we come from all walks of life. We fight Keystone XL in order to protect our land, our water and our families’ stories. TransCanada likes to pretend that this pipeline is carrying rainbows with pots of gold. The politicians that stand with them, like Rep. Lee Terry of Nebraska, say building the pipeline will actually help fight climate change, that it is some magic bullet for folks needing jobs and that a spill will be cleaned up easily.

All we have to do is look to Kalamazoo, Mich., or Mayflower, Ark., to know that TransCanada and politicians like Lee Terry are just snake oil salesmen and it’s a bunch of hogwash that extracting tar sands at an expanded level will not impact climate change.

We have a deep responsibility to start changing how we vote. We are a group of citizens who might buy Mason jars at Walmart, and some of us might buy those same jars at Williams- Sonoma, but we should start calling ourselves the Mason Jar Voters. We care about local food, we care about clean and local energy, and we certainly don’t want to see tar sands running through land, water and sacred tribal ground.

The reason politicians have been able to get away with denying the basic science of climate change–and the basic science of how difficult it would be to clean up a tar sands spill in our water–is because we are not going into the voting booth in large numbers demanding that we, Mason Jar Voters, have the power to change elections and therefore change policy direction. 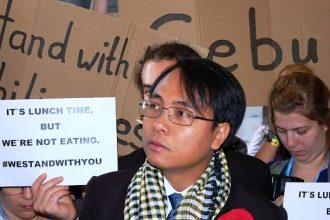 Op-ed: Can Humanity Rise to the Climate Challenge?