WASHINGTON—A ceremony on the Capitol’s West Lawn to light a 78-foot red spruce from Pisgah National Forest earlier this month heralded the festive holiday season. The tree was one of nearly 5 million Christmas trees harvested in North Carolina this year.

“Our Capitol Christmas tree reminds us of the importance of working together to be good stewards of our environment, so that future generations can enjoy the bounties of forests and Christmases still to come,” said Republican Sen. Richard Burr of North Carolina.

The tree will light up the West Lawn until the first week of January, when its wood will be recycled to make musical instruments, according to the U.S. Forest Service. These instruments will be donated to local North Carolina communities.

The tree’s afterlife as newly crafted violins, guitars and mandolins demonstrates one of several sustainable ways to dispose of Christmas trees—a key issue for increasingly climate-conscious consumers weighing the choice between real and artificial trees.

A survey conducted by the National Christmas Tree Association estimated that almost 21 million trees were purchased in the U.S. in 2021. Around 10 million artificial trees are reported to be purchased each season.

The growth of the artificial tree market has had an acute impact on growers with consumer preferences shifting towards artificial trees over the past 30 years, said Jill Sidebottom of the National Christmas Tree Association.

The reason for the shift is likely multi-faceted. The Association’s survey found that the median price of a real tree in 2021 was $69.50. Higher costs of production and constrained supply means this will likely increase this year, according to a New York Times analysis. The shortage in supply can be partially attributed to planting decisions made a decade ago, the newspaper said. Trees must grow for five to 15 years before they are ready to be harvested.

Artificial trees, which also retailed at a median price of $70 in 2021, may also become more expensive as production and transport costs increase globally. However, these can be re-used for many years, making them more affordable in the long run.

A comparison between real and artificial trees has left some consumers concerned about the sustainability of purchasing real trees. The debate is a nuanced one. Real trees capture and store carbon during their lifetime. However, once cut down for Christmas, their potential to harm the environment depends on those who buy and dispose of them.

According to Ian Rotherham, emeritus professor at Sheffield Hallam University in England and a researcher on wildlife and environmental issues, the comparison must involve more than just the act of cutting down trees.

“If you’re cutting down a Christmas tree from a mixed-age plantation, where you take some of the trees out and you leave some in, that actually has no impact on the carbon capture of that plantation because the trees will compensate relative to the space that you’ve freed up,” he said.

Harvesting a large number of trees that are the same size and age at once will have some impact. However, “they will probably then replant another crop into that same space … So, to some extent that will balance, so long as you are then disposing of the tree when you have used it in a responsible way,” he said.

For every Christmas tree harvested in the U.S., one to three seedlings are planted the following spring, according to the National Christmas Tree Association.

The best option for the environment, in Rotherham’s view, “depends on what you do with it after you’ve used them.”

A real tree that is dumped in a landfill will produce methane as it decomposes. Methane is a greenhouse gas that has more than 80 times the warming power of carbon dioxide over the first 20 years after it reaches the atmosphere. While carbon dioxide has a longer-lasting effect on the climate, methane drives the speed of warming in the near term.

The methane produced by a two-meter tree as it decomposes is equivalent to emitting 16 kilograms of carbon dioxide, according to Carbon Trust, a U.K.-based nonprofit focused on climate change and carbon emissions. If all 21 million U.S. consumers who purchased a real Christmas tree last year disposed of it in landfill, the climate impacts would be the equivalent of 42,283 homes’ energy use for one year, according to an analysis using EPA data.

A less harmful alternative is burning the tree. This method simply releases the carbon dioxide that it stored while growing, meaning there is no net increase in the atmosphere, although burning the tree would produce other harmful air pollutants.

The most benign option, according to Rotherham, is to use and re-plant a living tree. However, this can be challenging in cold climates, so where that is not possible, he recommends composting the tree or taking it to a community site to be chipped. When spread on the garden, the tree returns organic matter to the soil and helps to store carbon.

Sidebottom, whose organization represents growers and allied businesses within the farm-grown Christmas tree industry, did not consider the comparison between real and artificial trees a close call. “The bottom line is that fake trees are always, no matter how many years you use them, going to end up in a landfill somewhere,” she said.

Artificial trees have a significant environmental impact from the beginning of their lives. Most sold in the U.S. are made from plastic in China. Manufacturing and transporting a two-meter tree results in the release of approximately 40 kilograms of greenhouse gas emissions, according to Carbon Trust.

While the initial environmental impacts of artificial trees are significant, their greenhouse gas contributions will eventually fall.

“With an artificial tree, you can end up with a carbon footprint that is almost negligible if you use it for long enough,” said Rotherham. “But then, at the end of its life you have the disposal issue. Depending on what it’s made of it won’t be easy to recycle.”

If an artificial tree is dumped in a landfill at the end of its life, it will take centuries to break down and will produce methane in the process, according to a recent study on how plastics perform in landfills.

Real trees, on the other hand, are not normally dumped in landfills, said Sidebottom.

“Most communities will either have a curbside pickup for recycling, or they will have an area that operates year-round where you can take [your tree] and it can be mulched,” she said. “There aren’t that many trees that would end up in a landfill.”

More than 4,000 communities across the country have Christmas tree recycling programs. These ensure proper recycling is accessible even to residents without much outdoor space.

Some communities have found other, inventive ways to re-use their trees. Wood can be collected and re-used to create arts and crafts, or musical instruments, as in the case of the Capitol tree. Other communities shred trees and use the remains to create hiking trails. Some Christmas trees are even placed in zoos for the animals to enjoy, Sidebottom said.

Consumers will have their own personal preferences about real or artificial trees based on convenience, price and tradition. The key, said Rotherham, is in ensuring they are used and disposed of responsibly.

For those who choose artificial trees, they are best used year after year to reduce the climate impact. For consumers who prefer the tradition and smell of a real tree, it is important to remember that they make great mulch, or, as with the red spruce on the Capitol lawn—or violins. 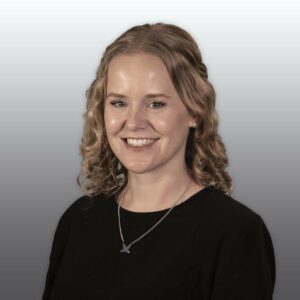 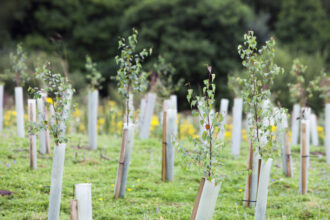 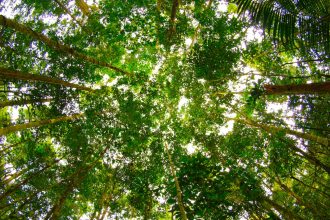