When most solar panels were stationary and one-sided, this idea carried some weight. But now, most panels move on an axis to follow the sun throughout the day, and an increasing share of panels have silicon on the front and back, making solar more effective even in places with regular snowfall.

Here’s the latest: A recent paper led by researchers at Western University in London, Ontario shows that the use of “bifacial” photovoltaic panels—solar panels that take in sunlight from both sides—produces substantially more electricity during winter compared to using one-sided panels, based on data from a solar array that has both kinds of panels.

“I was surprised how striking the results were,” said Joshua Pearce, an electrical engineering professor at Western University and co-author of the paper. “There is no question now that bifacial modules are the way to go for ground-mounted PV systems in the north.”

The paper, published in the journal Renewable Energy, shows that double-sided panels can take in substantial amounts of energy from light reflected off of the snowy ground at times when the front of the panel is most likely to be partially covered by snow, as described in PV Magazine.

The researchers went to a solar array in Escanaba, a town in the Upper Peninsula of Michigan. They mounted cameras to observe snow cover, pyranometers to measure levels of solar radiation and also gathered electricity generation data from the system’s operator.

During the cold-weather months of November 2020 to March 2021, the one-sided panels experienced a snow-related energy loss of 33 percent, while the two-sided panels had a loss of 16 percent. The study period included 30 days in which there was snowfall.

Most of the gains for the two-sided panels were because of the reason the researchers expected, which is that sunlight reflected off of the snowy ground and hit the back side of the panels.

But the team found additional benefits in that the snow melted faster on the two-sided panels than on the one-sided ones. This is likely because the panels got warm from absorbing light on the back side, but that’s just a guess since the researchers were not measuring the panel temperatures.

The paper builds on a body of work, including some from this same group at Western University, that suggests what utilities can expect if they build large solar arrays in places that can get several dozen days of snow.

I don’t want to overstate the findings. A solar array in Arizona is still going to produce a lot more electricity per panel than an array in North Dakota, as shown in maps of the differing levels of sunlight across the country. The paper is presenting a more modest takeaway, which is that two-sided panels have big advantages in northern climates that make the projects more financially appealing compared to using the kinds of panels that were most common a few years ago.

One of the moving targets in research about solar panel output is that panels continue to get more efficient. Last week, the National Renewable Energy Laboratory reported that it had created a solar cell that was 39.5 percent efficient, which beats the lab’s previous record of 39.2 percent. A panel’s efficiency is a measure of how much of the sun’s energy can be absorbed and turned into electricity.

But the record-setting numbers remain limited to a lab setting. The typical efficiency for solar panels installed today is about 20 percent, which is a major improvement over a decade ago.

The upshot, which I wrote about in January, is that developers can now generate more electricity per acre of solar power than they could before, and this improvement is likely to continue with each new generation of panels.

Two-sided panels play a role in the growing output of solar farms. They have gone from less than 20 percent of new panel sales in 2017 to about 85 percent in 2021, according to the research firm Wood Mackenzie. (Figures are for crystalline silicon panels used in utility-scale projects, which includes most of the solar market.)

“It pretty much happened instantaneously,” Kelsey Goss, a Wood Mackenzie solar industry analyst, said about the growth. “The door opened for bifacial products and pretty much all Tier 1 manufacturers shifted to make that product.”

Two-sided panels have performance advantages with only a small cost difference, as costs have gone down along with the increase in market share. Prices vary by manufacturer, but Pearce sums up the differences by saying that two-sided panels are “only a few percent more costly.”

That only adds to the financial case for building more utility-scale solar, even in places where it’s not unusual to own snowshoes.

Hyundai Announces Electric Vehicle Plant in Georgia: Hyundai Motor Group has confirmed plans to spend $5.5 billion to build an electric vehicle and battery manufacturing plant near Savannah, Georgia, that could employ up to 8,100 workers. The official announcement came during President Joe Biden’s visit to South Korea, where Hyundai is based. The plant is an economic development coup for Georgia, which is establishing itself as a center of EV and battery manufacturing, as J. Scott Trubey and Greg Bluestein report for The Atlanta Journal-Constitution. Hyundai joins Rivian, the maker of electric trucks, in selecting the state for a major plant. “I have the privilege, for the second time in the same fiscal year, to welcome the largest economic development project in the state’s history,” said Georgia Gov. Brian Kemp at an event marking the announcement.

The Largest Battery Storage System in Texas is Officially Online: Vistra Corp. announced that its DeCordova Energy Storage Facility—which the company describes as the largest battery-storage plant in the state—is now online in Granbury, Texas. The 260-megawatt lithium-ion battery system is built to run for one hour before being recharged. This is a hybrid project, with batteries working alongside a natural gas turbine to provide support to the local grid, as Sophia Beausoleil reports for NBCDFW. “With these batteries, they are charging at night for the most part when we’re not using power as much and all those wind farms are blowing across the state of Texas,” said Claudia Morrow, senior vice president of development for Vistra. “They’re charging with energy when it’s most available and then they’re going to put that power back onto the grid when our customers really need it.” The one-hour duration of the battery is on the low side for battery storage projects, indicating that Vistra wants this system to be able to provide a lot of power for a short amount of time, which is likely based on what the company sees as most needed in the region where the project is located.

A New Proposal May Make Going Electric for Heat an Easy Choice: A new bill in the U.S. Senate would boost domestic production of heat pumps by giving manufacturers tax credits of $600 to $1,000 for each unit that comes off the line. The measure, whose lead sponsor is Sen. Amy Klobuchar (D-Minn.), is trying to take on one of the biggest challenges in the transition to clean energy, which is getting people to move away from using natural gas for heating, as Alexander C. Kaufman reports for HuffPost. Heat pumps, which use electricity to provide heat and cooling, are essential to this effort. For more on heat pumps, energy scholar Costa Samaras explains how they work in a Twitter thread, using the analogy of the McDLT, a sandwich sold by McDonald’s in the 1980s.

Global EV Sales Totaled More Each Week in 2021 Than in All of 2012: The International Energy Agency issued a report on the state of the electric vehicle market, showing details of a record-setting 2021 and some of the challenges manufacturers are facing with shortages of critical parts. In China, EV sales tripled to 3.3 million. Sales also grew strongly in Europe and the United States. “Few areas of the new global energy economy are as dynamic as electric vehicles,” Fatih Birol, IEA executive director, said in a statement. “The success of the sector in setting new sales records is extremely encouraging, but there is no room for complacency.”

Duke Energy Reaches Agreement with North Carolina Solar Installers on Net Metering: Three of the largest solar installers in North Carolina have negotiated a deal with the utility Duke Energy in which Duke would hold off on implementing new rates for solar owners that the solar industry views as harmful. The agreement, which still needs to be approved by state utility regulators, is happening as the state is looking at long-term changes to net metering, the system for compensating solar owners for the excess electricity they send back to the grid, as Emma Penrod reports for Utility Dive. This is the latest of several examples of Duke working with the solar industry in the Carolinas to avoid what could be a much more contentious process. 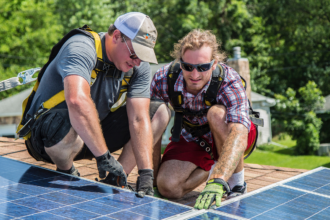