When Stephanie Kampf visited one of her wildfire test plots near Colorado’s Joe Wright Reservoir in June of 2021, the charred remains of what had been a cool, shady spruce and fir forest before the Cameron Peak Fire incinerated it nearly took her breath away.

“We would walk through these burned areas and they were just black, nothing growing and already getting kind of hot,” she said. “And then you walk into an unburned patch, and there’d still be snow on the ground. You could almost breathe more.”

The surveys, up at about 10,000 feet in the Rocky Mountains west of Fort Collins, were part of a rapid response science assessment to measure just how much the extreme 2020 wildfire season in the West disrupted the water-snow cycle in the critical late-snowmelt zone which serves as a huge natural reservoir. The snowmelt sustains river flows that nurture ecosystems, fills irrigation ditches for crops and delivers supplies of industrial and drinking water to communities.

The findings of the study, published earlier this month in the Proceedings of the National Academies of Sciences, suggest that the relationships of snow and water in many Western mountain forests are caught in a vicious climate cycle, with more fires leading to faster snowmelt and reduced water, which, in turn, makes forests more flammable.

The critical areas are at different elevations in various parts of the West, depending on latitude and other geographic factors, but long-term wildfire records suggest that for millennia, fire was a rare visitor in many high-altitude forests, with burn intervals of 200 to 300 years, or even longer in wetter regions.

In Colorado those snow accumulation zones can produce “on the order of half of all streamflows,” with some geographic nuances, said Kampf, a Colorado State University researcher who is currently on sabbatical in Spain, where she studying the impacts of similarly devastating wildfires that have scorched the Iberian Peninsula in recent years.

During her Colorado research, “It was just so striking to go up to these places and see no snow left,” she said. In one unburned comparison plot a short distance away, there was still more than three feet of snow. “It’s disturbing when you’re accustomed to a place and how it was, and you see it change that much. It’s kind of mind blowing. I suspected that what we experienced in 2020 was outside the norm, but I didn’t realize how far outside the norm it was. And that was just honestly pretty disturbing.”

With the measurements of the Cameron Peak Fire in Colorado as a case study, Kamp’s research team also analyzed satellite data from 1984 to 2020 to show how wildfires are encroaching on the critical snow-storage zones across 70 percent of the Western mountain study area, including the Sierra Nevada, Cascades, Rocky Mountain and Great Basin ranges.

Peak snowpack is declining, which can reduce or even choke off streamflows completely in late summer because the snow is melting off the burned areas much faster. Colorado and New Mexico appear especially vulnerable to fires threatening watersheds that are critical to local residents as well as distant communities on both sides of the Continental Divide.

Wildfires are leaving mountains free of snow earlier in the year, the authors wrote, “and this loss of snow can reduce both ecosystem water availability and streamflow generation in a region that relies heavily on mountain snowpack for water supply.” And as the snowpack melts earlier, the ground and plants warm up and dry faster, setting the stage for more fire in a vicious cycle of climatic changes.

The Extreme 2020 Wildfire Season Was a Warning

The overall drying from climate change is expanding the threat in areas “that historically have provided a large fraction of annual water supplies,” said Paul Brooks, a hydrology researcher at the University of Utah, who was not involved in the new study. “Fires are becoming more frequent in colder, wetter environments that typically burned rarely.”

The research shows that burned forests often reduce the total amount of water stored in the snowpack and speed up melting, he added.

Kampf described her findings in the broader context of the extreme wildfires in the summer of 2020, when wide swaths of the West choked under gloomy layers of toxic smoke that sometimes spread all the way to the East Coast. In Colorado, the Cameron Peak fire burned from mid-August through early December—112 days—with a last patch left smoldering under winter snow near her university’s mountain campus.

“It just kept growing. And it grew to a size that was just unprecedented. And we hadn’t seen anything like that, way up in the higher elevations,” she said. “Then the East Troublesome Fire, which burned in really damp, snow-dominated areas, and then over the Continental Divide, which was not something anyone expected. And so this was just really shocking and concerning.”

As a researcher who’s been studying snowmelt runoff for years, she wondered, “to what extent is the snowmelt runoff going to change as a result of these fires?” she said. “And I also wondered, is what we’re seeing in these areas of Colorado happening in other parts of the West?”

Understanding the short-term effects of wildfires on the snow-water cycle can help societies prepare for their impacts. But witnessing the dramatic changes to Colorado’s snowpack and water supply after the state’s devastating summer of wildfires and the coronavirus pandemic that arrived in the country a few months earlier was almost overwhelming, Kampf said.

“It gets to be a lot to take in, to just watch and document the world changing so quickly,” she said. “I don’t think we‘re well adapted to rapid change in this way. How do we cope?” 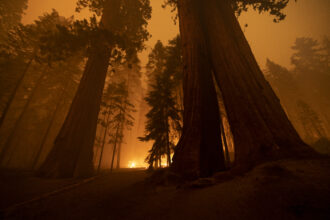 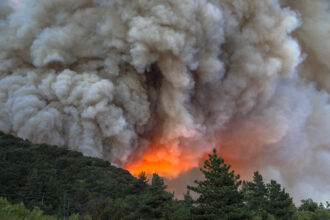 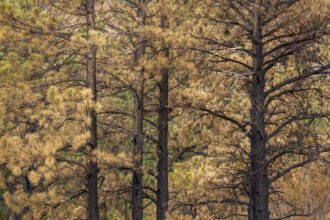