That’s the largest penalty levied against a frac sand company in the state in at least three years. And it’s the second largest fine issued to any industry by regulators at the state’s Pollution Control Agency this year.

The fine comes at a time when Minnesota is overhauling its rules for the burgeoning frac sand industry. Minnesota is the nation’s fourth largest producer of silica sand, a key ingredient used in hydraulic fracturing, or fracking. Its neighbor Wisconsin is the top producer.

The frac sand industry is driving an economic boom across the region, providing thousands of new jobs and injecting millions of dollars in new development. But there’s concern about the growing frac sand industry’s impact on air, water, noise and light pollution. Minnesota officials are trying to address many of these issues with the current rulemaking effort.

Tiller Corp. operates in Minnesota and Wisconsin—and has received big fines in both states. The company mines the sand in Wisconsin and then carts it to Minnesota, where it’s cleaned and sorted. Then the precious material is shipped out by rail or truck, generally to well sites across the country.

Silica sand is hard and round, making it ideal for breaking open shale bedrock when injected underground with water and chemicals. It then helps hold open the fresh cracks while oil and gas are extracted. A single fracked well can use up to 10,000 tons of this special sand over its lifetime.

The Tiller facility hit with the recent fine is a combined processing and transport hub in North Branch, a town close to the Wisconsin border.

Tiller Corp. did not respond to requests for comment.

Although several activists told InsideClimate News that while they were happy the state took action at all, they thought more could have been done—and sooner.

Kelley Stanage, a citizen representative on Minnesota’s silica sand rulemaking advisory panel, which contributes to the rulemaking progress, pointed out that the fine was issued over a year after the initial violation. Meanwhile, those living next to the facility “still had to breathe toxins in the air and deal with constant noise,” Stanage wrote in an email to InsideClimate News.

Penalties need to be “much more forceful,” she said, “such as shutting down projects until conformance is proven, before the public will feel that they’re being protected.”

State regulators issued the fine on Thursday, Nov. 20, the day before the public comment period ended for a document outlining key concepts to be addressed in the agency’s upcoming new silica sand air rules.

The Land Stewardship Project, a Minnesota-based activist group, is one of 10 groups and individuals who submitted comments. According to an organizer from the group, Bobby King, many of the suggestions raised in those comments—”quicker reporting of data and much faster repercussions” by regulators—are relevant to the Tiller Corp. violation.

This same North Branch facility received a fine of $19,800 on Jan. 22, 2013 for starting construction in late 2011 without the proper air quality permits. At the time the fine was issued, the facility had yet not started operating.

Early this year, a joint Tiller Corp. and Interstate Energy Partners mine in Wisconsin received an $80,000 fine for spilling frac sand into wetlands, a stream and the St. Croix River.

This incident was called out in a recent report by the Land Stewardship Project tallying major frac sand violations in Wisconsin. 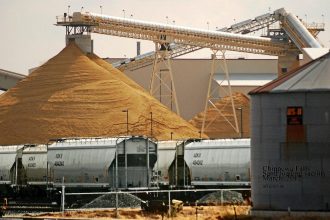 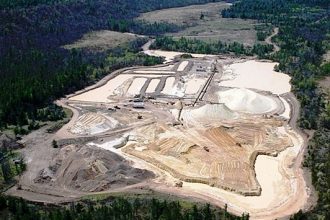