Today’s report on climate impacts, vulnerabilities and adaptation from the Intergovernmental Panel on Climate Change was finalized just as Russia invaded Ukraine. Russian scientists at the online approval session Sunday apologized for their country’s invasion, while the war drew Ukrainian scientists away from the meeting.

It might be hard to concentrate on the new science assessment as a war erupts in Europe, but it’s important to focus on both subjects at the same time because they are deeply related, said Rod Schoonover, a climate security expert with the Council on Strategic Risks’ Center for Climate and Security, and a former United States intelligence officer.

“You shouldn’t shut one or the other off. Humanity’s relationship to fossil fuel is underwriting this invasion,” he said. “Putin thought he could get away with it because of Europe’s dependence on Russian gas.”

In the longer term, ending the addiction could even reduce the need for military spending, since much of it goes to securing sources and transportation of oil and gas. “Reducing reliance on fossil fuels enhances national security for the United States and other countries, and we should make that argument,” Schoonover said.

In the report, hundreds of scientists representing nearly every country described spiraling climate impacts, with the deadly, destructive effects like floods, famines and wildfires outpacing even some of the most ambitious efforts to adapt. The scientists warned that some of the changes are so extreme and fast that they will push communities beyond their ability to deal with them in places like the Arctic and along some coastlines, and pose a serious threat to food systems in many regions within decades.

“There are more extremes than the IPCC predicted just a few years ago,” said Rebecca Carter, acting director for climate resilience practice with the World Resources Institute, a Washington, D.C.-based environmental and policy think tank. “This is not just about the future any more. This is now. We didn’t prevent climate change.” Carter was not involved with producing the report.

The body of scientific research on global warming’s health impacts, including on mental health, has grown since the IPCC’s last climate assessment cycle in 2014. It shows that scientists until recently have underestimated the threat of the rapid spread of new infectious diseases, like tropical pathogens carried by insects that are expanding their ranges to areas once too cold for them, for example. And the looming climate threat is raising concerns about serious psychological trauma for many experiencing existential fear, especially young people.

“Delay is death,” said United Nations Secretary General António Guterres, summarizing the findings of the latest in a 30-year series of reports that are the scientific foundation of the Paris agreement to limit global warming close to 1.5 degrees Celsius (3.6 degrees Fahrenheit), which was reached under the United Nations Framework Convention on Climate Change in 2015.

Guterres said the report presents “an atlas of human suffering and a damning indictment of failed climate leadership,” which has ignored the fact that nearly half of humanity is living in the climate danger zone right now, and many ecosystems are already at the point of no return.

“This abdication of leadership is criminal. The world’s biggest polluters are guilty of arson of our only home,” he said. “It is essential to meet the goal of limiting global temperature rise to 1.5 degrees. Science tells us that it will require the world to cut emissions by 45 percent by 2030 and achieve net zero emissions by 2050.”

Ecologist Camille Parmesan, one of the lead authors of the report, said it shows that climate impacts will arrive faster and be “much more widespread than we thought.” The science assessed for it by the IPCC opened “a whole new realm on infectious diseases emerging in new areas,” and documents species extinctions and mass mortalities of mammals caused directly by climate change. Local losses of key species are already affecting the stability and integrity of ecosystems, she added.

Even to the authors, the intensity of some impacts from the current level of warming were surprising and disturbing, she said. Insect-ravaged forests, dried-up peatlands and “even intact, undisturbed Amazon rainforest” are losing their ability to remove carbon dioxide from the air, she said. “Maybe not every year,” she continued, but at a pace that could further accelerate warming.

Meanwhile, global emissions are still going up, and the panel’s report warned how risky it would be to shoot past the Paris agreement goal and rely on unproven carbon dioxide removal technologies to reduce the temperature quickly.

“We are concluding that going above our targets would increase risk of irreversible impacts,” Parmesan said, while other impacts would be “difficult to reverse after overshoot.”

In the United States and North America, the report says that many millions of people in every sector and in every region are feeling the effects of climate change “much faster and more severely than we previously thought,” said co-author Sherilee Harper, a public health and climate researcher with the University of Alberta.

The IPCC report also acknowledges that the reaction to the climate crisis “was slowed by misinformation around climate science,” she added. Consequently, many adaptation efforts are still just in planning phases when implementation is urgently needed.

“Overall the picture is stark for food systems,” she said. “The transformative changes we need are not happening to support adequate food production.”

It all adds up to more lost lives and devastated livelihoods around the world, Guterres said, calling for a renewed worldwide effort to stop global warming.

“Every country must honor the Glasgow pledge to strengthen national climate plans every year until they are aligned with 1.5 Celsius,” he said. “The G20 must lead the way, or humanity will pay an even more tragic price.”

War Devastates the Climate and International Efforts to Preserve It

But it’s unlikely that the G20—made up of the nations with the largest economies in the world—will step up more on climate when it is distracted by a conflict involving one of its members that threatens to draw in others.

“War is terrible for emissions and for ecosystems and terrible for multilateral engagement,” Schoonover said. Yet the conflict is already threatening to exacerbate some of the effects of climate change highlighted by the new report.

“I’m really concerned about the impacts to food production in Ukraine,” he said. The country is a key source of grain for parts of the Middle East that face grain shortages because of global warming, showing how global warming impacts and conflict can intensify each other.

Russia’s aggression and its duplicity leading up to the attack may also call into question whether the country’s promises to fight global warming under the Paris agreement mean anything. Vladimir Putin is not an overt climate denier, Schoonover said, but has made clear that he intends for Russia to develop all of the nation’s climate-warming fossil fuel reserves, including in dangerous and sensitive environments like the Arctic, and he may be prepared to use force to assert other territorial claims for fossil fuels.

But the invasion could also spur a climate-beneficial backlash by hastening the switch to clean energy by Europeans shocked by the invasion and eager to reduce their dependence on Russian fossil fuels, Schoonover said. Europe does not want to be dependent on gas from North America, either, and building new fossil fuel infrastructure to facilitate delivery would lock in more harmful emissions.

Sending a fleet of liquid natural gas tankers from North America to Europe during an active conflict may be asking for trouble, and would require ramping up military operations to protect the tankers, potentially expanding the conflict and further warming the climate with the emissions from the millions of barrels of oil required to fuel the tankers and any escorts they may require. The U.S. military is already the single largest institutional consumer of oil.

“I know people everywhere are anxious and angry. I am, too,” Guterres said of the growing anguish over global warming. “Now is the time to turn rage into action. Every fraction of a degree matters. Every voice can make a difference. And every second counts.” 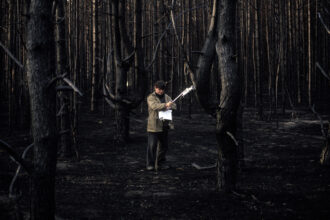