Along with the surge in deaths and destruction from their flames, smoke from Western wildfires presents a health threat to people far from the fires that will get much worse in the next few decades, scientists reported today. The study, published in the Proceedings of the National Academies of Sciences, largely focuses on tiny particles that go deep into lungs and can even enter the bloodstream to cause sickness and death.

The health risk is caused by particulate matter known as PM2.5 to denote bits of pollution smaller than 2.5 microns—about one-thirtieth the diameter of a human hair—that damages cells and organs. PM2.5 can be composed of many different substances, including dust from soil and construction materials. In most of the West, wildfires are the main source, at least in the summer.

The Pacific Northwest is a hotspot for the increase of particulate pollution, with harmful levels of PM2.5 from wildfire smoke likely to double or triple by the end of the century.

The research also anticipates spikes in other types of pollution carried by wildfire smoke. Even if all countries followed through on their Paris climate agreement pledges to stop or offset human greenhouse gas emissions by 2050, the emissions will still increase, with Western fires expected to produce 60 to 110 percent more carbon dioxide by late this century.

“I was a little surprised to see increasing wildfires and pollution at mid-century no matter which emissions scenario we follow,” said Lin, an atmospheric researcher with Princeton University and the National Oceanic and Atmospheric Administration. Even with big cuts in human greenhouse gas emissions, the study projects that PM2.5 pollution from wildfire smoke in the West will increase about 50 percent by mid-century, she said.

In the past five years, wildfires burning around communities have killed more than 200 people, and since 2005, flames have destroyed 93,000 structures. During the last two summers, smoke from Western fires has blanketed large swaths of the U.S., even reaching the East Coast. Some wildfires have burned so intensely that they pumped smoke into the stratosphere to damage the Earth’s ozone shield. Soot from fires, known as black carbon, also speeds melting of the Greenland Ice sheet.

Researchers estimate that, globally, current PM2.5 pollution contributes to more than 4 million premature deaths annually, including 200,000 in Europe and about 50,000 in the United States. Recent research shows how smoke interacts with other pollutants in urban settings to promote the formation of low-level ozone, another form of air pollution that harms human health and damages plants.

Wildfire smoke also damages crops and taints food, triggers asthma attacks and erodes mental health, as vulnerable people are forced to stay inside and forgo their regular routines to protect themselves as well as deal with the stress brought on by the scent and sight of the smoke. But there is little research on the impacts of extreme levels of PM2.5 pollution in some areas during recent large Western wildfires, which have produced readings more than 10, 20 or 30 times as high as the health thresholds set by the EPA.

Lin said the new study also includes the worrisome finding that extreme smoke pollution events like those caused by the megafires of the past few years—what many researchers describe as “smoke waves”—would recur every three to five years by late this century under the most likely “moderate” future emissions path.

Previous studies of wildfire smoke pollution were limited by climate models that couldn’t accurately show critical details that determine how much pollution a fire generates, including things like local and regional winds, she said. The new study uses the latest set of earth system models that reproduce the climate at a much finer scale, combined with a statistical model to predict PM2.5 emissions during the rest of this century under three standard emission scenarios used by the Intergovernmental Panel on Climate Change.

But the recent succession of four bad fire years suggests that even the latest models are underestimating fire activity, and other recent reports have warned of a major global surge of wildfires.

In some regions, wildfire smoke already hangs in the air for weeks during bad fire years. Public health experts note that the only way to eliminate the threat is to avoid breathing the smoke, which, short of wearing a gas mask or staying someplace with purified air, is nearly impossible to do. There are many people who have to work outside, including farmworkers and construction crews, and the smoke disrupts outdoor social activities, including sports.

Besides protecting people from smoke during the fires, there’s also a major effort to try to reduce the intensity of fires so they don’t emit so much pollution to begin with. Tactics include thinning some forest types, enacting closures during dangerous fire conditions and even turning off power lines to eliminate one common ignition source.

And fire experts, now sometimes guided by Indigenous and local knowledge, have already taken hopeful steps that could help reduce the intensity of some fires and the pollution they produce by trying to introduce more beneficial fire during seasons when the flames are least likely to escape control and less intense burning produces smoke with fewer health threats.

Smoke pollution that spikes to extreme levels during big, intense fires hasn’t been studied enough, said Kristie Ebi, an expert on climate change health risks at the University of Washington.

“We need to think about these really high exposures,” she said. Current air quality monitoring for PM2.5 and other pollution is designed for levels of pollution generated by ongoing human activities, which often stay within consistent ranges, but not for the huge spikes like those caused by recent megafires, she said.

The unexpected surges of pollution from wildfires is more evidence that some global warming impacts are outpacing societal efforts to adapt, which was detailed by the most recent Intergovernmental Panel on Climate Change report on impacts, adaptation and vulnerability. The threat reinforces the need to rethink public health protection at a fundamental level in the face of spiraling and often interconnected climate impacts, Ebi said.

Curtis Noonan, a public health expert at the University of Montana, said the new study is discouraging, but not completely unexpected. One thing that experts can do right away to help communities is step up warnings and information about smoke impacts, especially for extreme smoke waves, he said, adding that the increasing availability of low cost portable air sensors could help protect people.

“How much do we want to alter the way we live during those events, and what’s the trade-off to the impacts from the smoke,” he said. In Montana, it’s become a contentious issue as smoke limits high school football practices and even games.

“Part of that has to do with the changing duration of the wildfire season,” he said. “It used to be a late summer thing. Now it’s extending into fall.”

Smoke waves often occur simultaneously with other climate impacts, complicating public health responses. For example, heat waves and smoke waves often happen at the same time in the West, Ebi said, presenting health threats that require somewhat different mitigation efforts. For heat, the advice is for people to stay indoors where it’s cool and to open windows and doors for ventilation, but for smoke, the doors and windows should be closed, setting up a vexing dilemma. Air conditioning might not be available if the electricity has been cut to prevent power lines from sparking new wildfires.

She advocates for rethinking health warning systems to an “all-hazard, all society approach” that tries to account for different threats that can happen at the same time and affect different populations in different ways. There is no one-size-fits-all answer, she points out.

“Specific responses need to be place based,” she said. “And it would be really nice if various state agencies had a place where they could learn from each other. Are there ways we can use information from what happened at the fires near Boulder for communities in Eastern Washington?” she asked.

The fires that burned several hundred homes in the Rocky Mountain foothills near Boulder in late December were probably even more toxic than fires in remote forests because houses and other structures are built with plastics, chemicals and other materials that vaporized in the flames.

“It doesn’t smell like a nice campfire, it smells like burning plastic,” said University of Colorado, Boulder climate researcher Max Boykoff, a contributing author to the upcoming IPCC report on how to mitigate global warming. Persistent wildfire smoke is an “ominous signal that things are trending in a direction that we don’t want to be heading,” he said. “The new study on wildfire smoke pollution shows once again how global societies are lagging in making the changes needed to avert the most serious global warming threats.”

And the fact that smoke can affect communities far from the mortal threat of the flames shows that the threats of climate change are here and now.

“It is no longer a distant threat,” he said. “It is here and now in all our communities.” 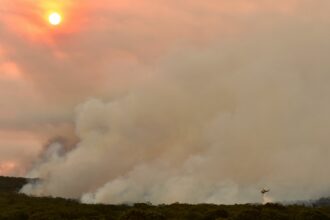 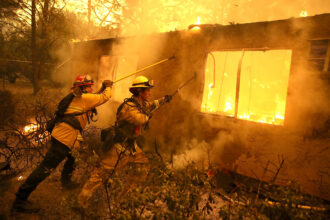 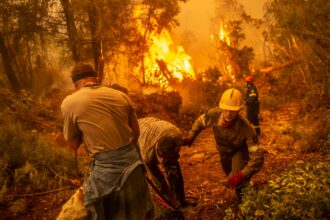