Can we laugh about something as dire as climate change?

The creators of a new comedy venture think so. In fact, comedian Esteban Gast believes humor is a way to reach people who haven’t thought much about climate change.

Gast is a comedian-in-residence at clean energy nonprofit Generation180 and a member of the creative team for the Climate Comedy Cohort, a group of nine comedians from around the United States who will spend the next six months learning from climate experts and collaborating to pitch jokes for future performances and videos.

The goal is to create climate communication with comedy baked in, said comedian Kenice Mobley, the comedy projects coordinator at the Center for Media and Social Impact and a creative team member for the comedy cohort. The group will work to find a balance between informing their audience about climate change without diving into a narrative of death and destruction. Rather, the cohort’s creators hope the audience will be learning, laughing and leaving feeling inspired.

“I’m so excited to see the projects that these [comedians] come up with,” Mobley said, “because it has just been doom and gloom mostly in the past.”

The health care sector accounts for 8.5 percent of greenhouse gas emissions in the United States, and a huge portion of that comes from surgeries. Operating rooms, in fact, have a carbon footprint three to six times larger than hospitals as a whole, with heat trapping anesthetic gases and energy-intensive robotic surgeries partly to blame.

Last year, after President Biden announced his goal to reduce greenhouse gas emissions in the U.S. by 50 percent by 2030, University of Michigan medical student Victor Agbafe and surgical resident Nicholas Berlin were inspired to find ways to reduce the massive impact that operating rooms have on a warming planet.

But it can be tricky to make changes that benefit the environment in a place where human lives are at stake, Berlin said. For that reason, he said, “changing our health care system is like turning the Titanic around.”

Berlin and Agbafe published a paper outlining some of the solutions to begin tackling the white whale of emissions reduction without compromising patient care. The paper, published in the Journal of Clinical Oncology, encourages hospitals to source products locally and meet patients virtually when possible to reduce emissions in the transportation sector. The authors also point out that robotic-assisted surgeries use a ton of energy, which should be considered when choosing that option for a patient. For example, a robotic hysterectomy, in which a doctor uses robotic technology to help remove a patient’s uterus, has the same carbon impact as a 2,200-mile car journey, the authors wrote.

Another big chunk of the impact comes from anesthetic gases, which in 2014 accounted for 3 million tons of carbon dioxide equivalent, the authors wrote. Only about 5 percent of the gas administered is inhaled by the patient during surgery; the rest is lost into the atmosphere, studies show. The common general anesthetic desflurane accounted for 80 percent of those emissions, but there is an alternative anesthetic, sevoflurane, that works just as well and has a much smaller climate impact, said George Mashour, chair of the department of anesthesiology at the University of Michigan. He recently started an initiative to reduce the department’s greenhouse gas emissions from anesthetic use by 80 percent in the next three years by switching to sevoflurane, eliminating the use of desflurane and reducing the use of nitrous oxide, also known as laughing gas, which is a greenhouse gas 300 times more damaging than carbon dioxide.

These efforts are urgently needed, Agbafe said, because climate change will have massive ramifications for human health as worsening environmental disasters increase the need for emergency care and pollution from fossil fuels leads to higher rates of cancer.

“We need to address the climate crisis both within the health care system that we operate in and advocate more broadly,” he said. “You can give patients treatment, but prevention is the best treatment.”

Humans have vastly altered the natural flow of water with development erasing wetlands and floodplains and man-made global warming changing where rain falls. But some are looking for ways to restore the natural ways of water to help solve the problem of too much or too little water in these communities.

Erica Gies, author of the new book “Water Always Wins,” calls these people “water detectives.” In her book, she visits places like England, California, Peru and India, learning about how water detectives are pursuing solutions to slow water down and help it work in harmony with the Earth, like finding ancient hidden underground channels that can store excess water or restoring natural ecosystems that hold water like a sponge.

Inside Climate News recently discussed the book with Gies. This conversation has been lightly edited for length and clarity.

How does climate change fit into the story of water?

Climate change is water change. And I think that’s one of the ways in which people are really beginning to accept or understand climate change on a visceral level, is when their particular area floods or they are experiencing really extreme water scarcity. And the reason for that is for each degree Celsius of global warming, the air can hold 7 percent more water vapor.

That’s why you’re seeing such dramatic increases in the quantity of rain that is held in a given storm system and how quickly it falls. And it’s also why we’re seeing these really extreme droughts, because the atmosphere is thirstier, so it’s pulling more water out of soil and plants.

Do you think humanity is beginning to accept the reality that water will always win? Or are we still fighting a losing battle?

The dominant culture is very much still approaching water with this attitude of control. And there are various cultural reasons for that which I get into in the book… And when it comes to water, it’s just very short sighted because we’re thinking about linear problem solving. We have flooding in this one place, so we’re gonna build a levee and keep the water in the channel, or we have scarcity in the other place, so we’re gonna build a dam and create a big pool to store water. But we’re not considering the natural systems in which the water is operating. And that’s why we’re creating all of these unintended consequences.

We’re hitting these kinds of tipping points where we’re seeing how the control mindset is failing. And, you know, it’s not required to think about water in that way. Many Indigenous cultures, many traditional cultures instead viewed water, rather than a commodity or a threat, they viewed water as a relative or a friend. So there’s this idea that with right comes responsibility. There’s a reciprocal relationship where we have to take care of water and cultivate it in order for water to provide what we need.

What do you hope readers take away from this book?

Climate change can feel really overwhelming. We’re waiting for national governments to reduce our emissions and they’re fighting over who should do it first. And meanwhile, things are just getting worse and worse in terms of extreme weather and impacts.

But slow-water projects are unique to a given watershed, and so people can work in their communities to protect themselves from water extremes, to buffer their human habitats from flooding and to store water underground for later to help them weather drought periods more easily. And they can also, while providing adaptation in their own communities, contribute to mitigation with the carbon storage that is a part of so many of these healthy ecosystems. So I think that’s empowering. There is something that you can do to protect yourself and your community right now.

In Carlsbad, New Mexico, a Permian Basin community that has a robust oil and gas drilling industry, resident Kayley Shoup has seen a growing number of people receiving cancer diagnoses, including her own mother. She didn’t realize that there could be a connection between these health problems and the oil and gas operations nearby until she got involved in environmental activism.

More than 20,000 people in the county where Carlsbad is located live within half a mile of oil and gas infrastructure, which can leak pollutants that are dangerous to human health. A new map created by advocacy groups Earthworks and FrackTracker Alliance, shows that across the United States, 17.3 million people, 3.9 million of them children, live within a half mile of oil and gas wells, compressors and processors—a zone the map designates as a “threat radius.”

“My story is common in this area,” Shoup said during a press conference about the new map. “The Permian Basin is in the desert literally, but it’s also kind of an informational desert, in my opinion. Many people here, along with health care practitioners in the area, are unaware of the risks that come with living  near oil and gas facilities.”

These facilities emit pollutants like benzene, a known carcinogen that can cause serious illnesses in children. A recent study also found that elderly people who lived nearby or downwind of oil and gas wells faced a significantly higher risk of death than those who did not live near oil and gas wells, suggesting the air pollutants emitted from wells were the culprit. Oil and gas operations also emit methane, a greenhouse gas that is about 80 times more potent than carbon dioxide at warming the planet over a 20-year period. Current regulations and enforcement are weak and data collection of these operations is insufficient, a recent investigation by the Howard Center for Investigative Journalism revealed.

The map features a “take action” button where users can send an email to Environmental Protection Agency head Michael Regan, asking the EPA to create more stringent regulations for methane and other emissions from oil and gas operations to protect human health and prevent worsening climate change.

A previous version of this story misidentified the titles of Gast and Mobley. Gast is the comedian-in-residence at clean energy nonprofit Generation180. Mobley is a comedian and comedy projects coordinator at the Center for Media and Social Impact. Both are on the creative team for the Climate Comedy Cohort. 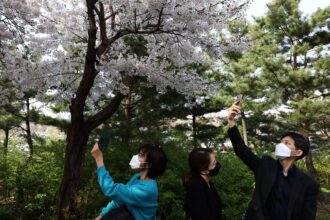