At the State Supreme Courthouse in Santa Fe, New Mexico this week, where it was nearly 90 degrees in the shade, something else was heating up: the battle over whether to dismantle the state’s greenhouse gas regulations.

At the root of the seven-month-long saga is the December decision by New Mexico’s Environmental Improvement Board (EIB) to cap global warming emissions from the state’s largest power plants by 3 percent per year from 2010 levels starting in 2013.

New Energy Economy (NEE), a nonprofit, led the two-year public process leading up to the landmark law’s adoption, which would allow the state to enter the Western Climate Initiative‘s (WCI) cap-and-trade program.

But Republican Gov. Susana Martinez, who promised during her 2010 campaign to abandon the carbon cap, promptly fired the seven-member EIB in January and tried to stall the ruling’s implementation for at least 90 days. Her efforts were later deemed unconstitutional by the State Supreme Court, and the policy went into effect.

But the law is far from secure. Two separate rulings by the court this week indicate that the dispute could run far into next year.

On Monday, the court placed a 180-day stay on efforts by utility PNM Resources to repeal the law. The utility, New Mexico’s largest, is now leading the legal push against EIB.

Both parties had requested the six-month timeout so they can try to resolve the issue out of court. For its part, PNM is aiming to prove via petition with EIB that the carbon cuts are not economically sound for the public, and thus get the law scrapped for good.

EIB is expected to grant PNM’s request for a hearing on August 1, and could move to eliminate the emissions law in November or December.

A spokesperson for EIB told SolveClimate News that the board had no comment on the hearing request, but said that it would likely entertain the petition, as it would for any sound case brought before the board.

Meanwhile, a second Supreme Court ruling on Wednesday gave Santa Fe-based NEE the right to intervene in the Court of Appeals case, which could shake up the proceedings. The appeals court had previously barred the nonprofit from participating in the legal process despite NEE’s early involvement in the law.

A NEE press release quoted Chief Justice Charles Daniels as asking that if “New Energy Economy is not allowed to intervene, who is going to defend the rule?” He said that without the group’s intervention, the legal process would be like “one hand clapping.”

Nanasi added that as a party in the case, NEE could challenge the 180-day freeze and thus defend the legal integrity of the carbon emissions law.

Advocates’ enthusiasm could be short-lived, however.

Bruce Frederick, a staff attorney at the New Mexico Environmental Law Center (NMELC), which represents NEE, said that he expects the environmental board to repeal the greenhouse gas regulations following the hearing this winter.

“Then, we’ll appeal that decision because it will be arbitrary and capricious,” he said. “The board has already predetermined the outcome of the case.”

EIB in Cahoots with Utilities?

He pointed to his law center’s July 22 motion to vacate the appeals court’s order of remand, or hold, on the PNM case.

The document claims that PNM and the newly-appointed EIB are “in collusion to circumvent the normal appeal and review process,” noting that in their joint motion for the remand, the two parties agreed to “resolve the appeal” of the carbon pollution law.

The law center’s petition later cites an earlier motion from PNM that states: “Governor Martinez has indicated that she does not support [the law] and is actively considering avenues to secure the repeal or otherwise prevent the implementation of that rule and other related rules.”

Martinez’s efforts to undo her state’s climate law echo those of other Republican governors and legislators across the United States. Upon election in November, several have tried with mixed success to repeal renewable energy standards and other clean energy policies — or, in the case of some East Coast leaders, yank their states from the Regional Greenhouse Gas Initiative, the country’s sole carbon trading scheme.

But the road has been particularly rocky for Martinez, as environmental organizations and other advocacy groups, eager to pave the way for New Mexico’s entrance into the lucrative clean economy, fight back.

The State Land Office in June saw unprecedented bid levels of $17.2 million at its monthly oil and natural-gas lease sale, according to the Associated Press. It broke that record again in July with a total of $19.5 million in bids from oil companies for drilling rights.

Nanasi said she is still confident that the greenhouse gas regulations will withstand the battle ahead in the EIB hearing.

She noted that an economic analysis published in February found that the law could create 17,500 jobs in the state’s electric sector and add more than $2 billion in total added economic value to the New Mexican residents and businesses.

“We feel like we’re in good shape if we are able to defend [the law] on merit,” she said. 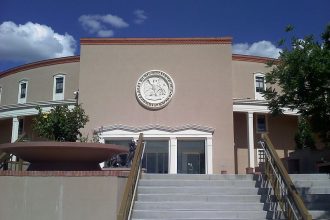 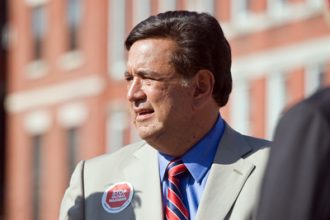