Near the surface of the ocean, global warming is creating increasingly distinct layers of warm water that stifle seawater circulations critical for regulating climate and sustaining marine life. The sheets of warm water block flows of heat, carbon, oxygen and nutrients within the water column, and between the oceans and atmosphere.

A new study shows more heat is building up in the upper 600 feet of the ocean than deeper down. That increasingly distinct warm layer on the surface can intensify tropical storms, disrupt fisheries, interfere with the ocean absorption of carbon and deplete oxygen, Michael Mann, a climate scientist at Penn State, said.

The intensified layering, called ocean stratification, is happening faster than scientists expected, an international team of researchers reported in the study, published Sept. 28 in the journal Nature Climate Change. And that means the negative impacts will arrive faster and also be greater than expected, said Mann, a co-author of the study.

The research suggests that some of the worst-case global warming scenarios outlined in major international climate reports can’t be ruled out, he said. If the ocean surface warms faster and less carbon is carried to the depths, those processes along with other climate feedbacks could lead atmospheric CO2 to triple and the global average temperature could increase 8 degrees Fahrenheit by 2100, he added.

“The take-home point, here, is that once again we are learning that the uncertainties are not breaking in our favor,” he said. “If anything, the impacts of climate change are proving to be worse than we predicted.”

Increased stratification of the ocean could drive a vicious cycle of warming, Mann added. If more and more heat stays near the surface of the ocean, the warm water will heat the atmosphere above. And if the layers of warm water slow the ocean’s uptake of carbon dioxide, more heat-trapping CO2 will stay in the atmosphere.

The researchers found that, overall, stratification in the upper 600 feet of the ocean increased by 6 percent in the last 50 years. Previous calculations measuring the change over time were not as accurate because they didn’t include as much data, said co-author Lijing Cheng, with the Chinese Academy of Sciences Institute of Atmospheric Physics.

In the new study, the researchers used a wealth of readings from new instruments deployed at many different depths and spread widely across the oceans to get a much better understanding of how the layers are changing all the way down to a depth of 6,500 feet, he added.

The observed increase in ocean stratification is “yet another climate science prediction come true,” said climate scientist Stefan Rahmstorf, with the Potsdam Institute for Climate Impacts Research, who was not involved in the study.

The increase in layering means there is less exchange between the surface and deeper oceans, “which is generally bad news on a number of fronts,” he said. “For example it reduces the oxygen supply to the waters below the ocean surface, which is bad for marine life. Oxygen-depleted dead zones are already spreading in the oceans.”

And, he added, increasing stratification is slowing the steady, massive distribution of cold and warm water between the Arctic and the Southern, or Antarctic, Ocean.

“Evidence is mounting that this circulation system is already slowing down, as has been predicted by climate models,” he said.

That vast system of ocean currents shunts warm and cold water between the Arctic, North Atlantic and Antarctic oceans. A disruption could lead to major climate shifts.

If the current slows, more hot water could build up along the East Coast of the United States, leading to more coastal heat waves and rising sea levels. And if less warm water is transported northward, the climate in northwestern Europe would become more volatile. According to a 2015 study published in the journal Climate Dynamics, impacts would include cooling in the North Atlantic and Northern Hemisphere in general; less precipitation in the midlatitudes of the Northern Hemisphere; large precipitation shifts in the tropics and a strengthening of the North Atlantic storm track.

The study also suggests that increased layering could affect El Niño-La Niña cycles in the Pacific. Those multi-year warm-cold fluctuations affect temperatures around the world, with global hot spikes during strong El Niños and cool-downs during La Niña. But the growing stratification could suppress those cycles, “leaving the Pacific in a permanent El Niño state,” Mann added.

“We know that something like this happened during the early Holocene 9,000 or so years ago,” he said, but added that the new paper doesn’t identify specific impacts to the El Niño cycle.

The impacts on marine life are more certain, said co-author Kevin Trenberth, a climate scientist with the National Center for Atmospheric Research.

“Greater stability resists vertical movements and can have profound effects on zooplankton, fish and mammals,” he said. “The nutrients from the bottom have to merge with the light from the sun in upper layers for high productivity,” but the increasingly stable layers may limit the rise of those nutrients, he added.

Equally important is how the layering affects the amount of carbon dioxide going into the ocean. For now, oceans take up about a quarter of the CO2 emissions from human activity, “but prospects are for less of that as time goes on,” Trenberth said.

“That’s a double whammy. In the first case, that means that the oceans are less able to take up CO2 from the atmosphere, and so atmospheric CO2 builds up even faster. The ocean becomes less effective as a “carbon sink,” he said. “In the second case, it means that the oceans hold less oxygen. That’s problematic for sea life that, like us, needs oxygen. It’s a threat to the food web, including fish.”

Trenberth said the effect on hurricanes is also clear. The heat in the top 300 to 400 feet of the ocean is what fuels tropical storms. Strong storms churn up the ocean, bringing colder water to the surface that can limit strengthening, or even weaken a storm. But nowadays, “that cold water is warmer than it used to be,” which enables storms to build and maintain intensity,” he said. “This is why hurricanes are bigger and longer-lasting and more intense than before.” 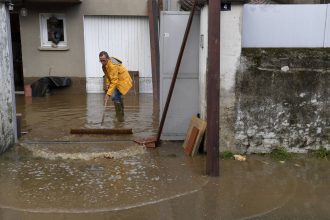 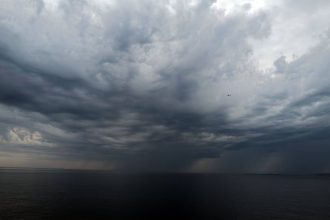 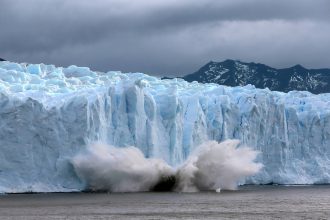