Hydraulic fracturing and other oil and gas operations contaminated the groundwater in Pavillion, Wyoming, according to a new study by Stanford University scientists. The findings raise concerns about possible water pollution in other heavily fracked and geologically similar communities in the U.S. West.

Pavillion has long been a flashpoint in the national debate over the potential impact of hydraulic fracturing, or fracking, on drinking water. Town residents began complaining of tainted drinking water in the 1990s, as oil and gas development boomed in the area. The Environmental Protection Agency released a draft study in 2011 indicating that oil and gas activities contaminated the town’s water. But after blistering criticism from industry and Wyoming politicians, the EPA shut down its probe in 2013 and turned over sampling to state regulators. The state’s studies have so far found no proof of contamination.

Published in Environmental Science & Technology, the Stanford study identified chemicals in Pavillion’s water related to substances that companies reported using in local fracking operations and acid stimulation, an oil and gas production method. The researchers also found that energy companies frequently fracked at much shallower depths than previously thought, sometimes very close to drinking water wells. In addition, companies fracked into underground sources of drinking water, or USDWs, defined under federal law as aquifers that could supply a public water system. Fracking into USDWs is legal, but the oil and gas industry has long insisted that fracking occurs far deeper than where aquifers are located.

The study further determined possible pathways of water contamination. For example, researchers found that because of Pavillion’s distinct geology, where natural gas often exists alongside water, hazardous chemicals could migrate from fracking zones along fissures into the aquifer. Faulty cement barriers around the steel casing inside an oil or gas well also create the potential for fracking chemicals to seep underground. Finally, as many as 44 unlined earthen pits were used before 1995 for disposal of diesel- and chemical-laced fluids from drilling and production. Tests of nearby groundwater showed dangerous concentrations of diesel-related and volatile organic compounds, such as benzene, a known carcinogen, and the neurotoxin toluene.

Written by Stanford visiting scholar Dominic DiGiulio and professor of earth sciences Robert Jackson, the study arrives as the EPA moves to finalize a sweeping, multi-year report on the impact of fracking on water. In a 1,000-page draft issued last June, the EPA concluded that fracking has not had systemic, widespread effects on drinking water. But since last fall, the agency’s own panel of independent scientific advisors has disputed that conclusion and recommended that the EPA discuss in greater detail its investigations into water contamination in Pavillion and other communities.

DiGiulio was also one of the lead scientists on EPA’s probe of Pavillion. He said the additional research he and Jackson did for their paper raised questions about groundwater quality in other parts of the West where fracking occurs. “Pavillion isn’t geologically unique in the West, and I’m concerned about the Rocky Mountain region of the U.S.,” DiGiulio said. “The impact on USDWs could be fairly extensive. Pavillion is like a canary in a coal mine and we need to look at other fields.”

The study is based entirely on publicly available data, including EPA’s water tests that began in 2008, and more than 1,000 drilling and production reports filed by industry with the state of Wyoming.

A small town in west-central Wyoming, Pavillion has been the site of densely packed oil and gas development since 1953, with the first well fracked in 1964 and the last one in 2007, according to the study. Over that period, about 11 million gallons of fracking fluid were injected into the ground, the authors estimated. The various fluids and acid stimulation recipes contained a range of chemicals, including hydrochloric acid, methanol and diesel. Many of the chemicals are neurotoxins and carcinogens.

Some of that fluid was pumped directly into underground sources of drinking water. In Pavillion, groundwater is drawn from a major aquifer called the Wind River Formation. For about 30 meters below the surface, the aquifer flows unconfined. Below that, to depths of a few hundred meters, water is present, although in disjointed pockets throughout the sandstone. In the eastern U.S., layers of shale often separate USDWs from fracking. But in Pavillion and other parts of the West, the layers of water and hydrocarbons are often not distinct.

“In USDWs, fractures need only propagate a short distance to cause impact,” DiGiulio said in an email.

According to the reports companies filed with the state, fracking and acid well stimulation grew shallower over time. As a result, about 10 percent of wells that were fracked or stimulated were within 750 feet of the deepest water wells, roughly the length of two football fields, the study showed. Half were within 1,800 feet. Industry has long insisted that fracking occurs miles below USDWs. There are no special protections required in most states for fracking at shallow depths.

“Thankfully, the formations where hydraulic fracturing actually is occurring…are isolated from USDWs by multiple layers and often billions of tons of impenetrable rock,” Steve Everley, a spokesman for Energy in Depth, an industry group, told the Los Angeles Times in 2014.

USDWs are protected under the federal Safe Drinking Water Act. But in 2005, Congress exempted hydraulic fracturing from many federal laws including the drinking water protections, making it legal to frack into USDWs. The EPA could take action if it found that fracking’s impact on a USDW endangered public health, though it hasn’t yet.

“With hydraulic fracturing into USDWs, the decision is being made that gas is more important than drinking water resources, and that trade off is not well understood,” DiGiulio said. “It is legal to do that but it’s not clear if the impact is legal, and this paper is meant to raise discussion about it.”

The risks to drinking water rise when fracking occurs so close to groundwater pockets, the study found. For example, cement between the casing pipe in the well and surrounding rock prevents fracking fluid, oil and gas from seeping into the earth. But cement work in Wyoming wells is relatively shallow, which means that oil and gas wells extend for hundreds of meters without a barrier between their casing and the geological formation, including water. Further, the researchers found reports of casing failures at several wells.

Groundwater in Pavillion generally flows downward deeper into the earth, but in a few places, subterranean pressure forces the water upward relatively fast. The researchers found instances of water bubbling up at well sites and complicating oil and gas production. “One of the reasons this is important is that it shows ways that fracking fluids can migrate upward to water wells much faster than people had thought,” Jackson said.

To determine what was in Pavillion’s groundwater, the researchers analyzed data collected from two monitoring wells that the EPA drilled into groundwater in 2009 and 2010. EPA’s 2011 draft report was based in part on water samples from those two wells, and it showed alarmingly high levels of the carcinogen benzene in the water. The scientists also examined “substantial” amounts of data collected by the state of Wyoming after the EPA study was shelved. Taken together, the data show the presence of an array of chemicals unusual for groundwater but closely associated with fracking fluids.

For example, chloride concentrations in water samples from an EPA monitoring well were far above normal for the region. Compounds containing chlorides were used “extensively” in Pavillion’s fracking operations, the study said. Extremely high levels of diesel-related organic compounds were found in the monitoring wells. Low molecular weight organic acids were detected in high concentrations in the monitoring wells. Those acids are a sign of hydrocarbon contamination of groundwater, according to the study.

“When you look at everything as a whole, it seems implausible that all this is due to natural conditions,” DiGiulio said. “When you look at the compounds, it’s a virtual fingerprint of chemicals used in the field.”

The authors recommend further monitoring of groundwater in Pavillion, as well as regulations governing fracking at shallow depths and more extensive cement work on production casings. “Decades of activities at Pavillion have put people at risk,” Jackson said. “These are not best practices for most drillers.” 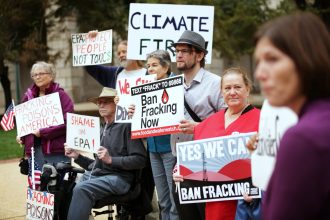 EPA Finding on Fracking's Water Pollution Disputed by Its Own Scientists 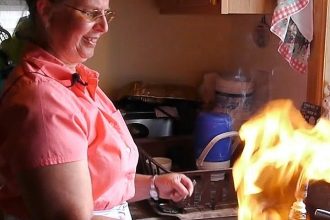