President Donald Trump declared on Tuesday he is returning power over environmental regulation to the states, with his executive order lifting restrictions on the fossil fuel industry. “States and communities know what’s best for them,” he said. “They understand it. They get it.”

But leaders of some of the nation’s biggest states and local governments say what they need is strong federal policy. The Mayors National Climate Action Agenda, which formed in 2015 to support U.S. policy in the run-up to the Paris climate talks, was one of the coalitions that responded immediately with a vow to use their powers to fend off the White House assault on environmental regulation.

“Climate change is both the greatest single threat we face, and our greatest economic opportunity for our nation,” the mayors of New York, Los Angeles, Houston and 72 other cities wrote in an open letter to the president. “That is why we affirm our cities’ commitments to taking every action possible to achieve the principles and goals of the Paris Climate Agreement, and to engage states, businesses and other sectors to join us.”

The opposition from state and local leaders was part of the intense reaction to the executive order around the country and world. Protesters gathered outside the White House late Tuesday afternoon, shouting “Water is life!” —a rallying cry of the Dakota Access pipeline protesters—as well as “Donald Trump, we’ll see you in court!” It was a prelude to larger protests being planned for late April in Washington, D.C.

The mayors’ group, comprised of mostly Democrats, said they objected to Trump’s executive order and his proposed cuts to environmental protection on behalf of the 41 million Americans they represent in both red and blue states. “Coastal residents confronting erosion and sea level rise; young and old alike suffering from worsening air pollution and at risk during heatwaves; mountain residents engulfed by wildfires; farmers struggling at harvest time due to drought; and communities across our nation challenged by extreme weather,” they wrote.

Meanwhile, the Democratic governors of California, Connecticut, Minnesota, New York, Oregon and Washington, along with five mayors in those states, said in a statement that they would continue to work to cut carbon emissions despite conflicting policy from Washington.

“Our commitment to limiting global average temperature increase to well below 2 degrees Celsius remains,” said the group. The signatories are members of the Under2 Coalition, a group of 167 cities, states and countries committed to slashing greenhouse gas emissions to 2 tons per capita, or 80-95 percent below 1990 levels by 2050.

Trump won mostly praise from fossil fuel industry groups and from many Republicans who spoke out on Capitol Hill. (An exception: Rep. Carlos Curbelo (R-Fla.), whose South Florida district is at risk from sea level rise, said, “We cannot simply turn a blind eye to this issue of climate change.”) Some of the president’s supporters complained he did not go far enough, and warned his policies would be more vulnerable to litigation and attack unless he exited the Paris climate agreement altogether and reversed the Environmental Protection Agency’s finding that climate change is a risk to health and ecosystems.

The White House insisted the order will create jobs, especially for “our incredible coal miners,” as Trump called them, turning to men who had been bused in for the signing ceremony at EPA. “I made this promise—we will put our miners back to work,” Trump said.

But most experts believe coal’s long decline, driven more by cheap, abundant natural gas and renewable energy as much as regulation, will not be easily reversed. And mining companies have been able to produce more coal cheaply through automation and smaller workforces. One of Trump’s top supporters in the industry, Robert Murray, chief executive of Murray Energy, this week warned about mining jobs: “He can’t bring them back.”

A coalition of West Coast governors and mayors said that rescinding federal climate policies would harm the nation’s economy. “There is no question that to act on climate is to act in our best economic interests,” said the governors of Washington, Oregon, California, and the Mayors of Seattle, Portland, San Francisco, Oakland and Los Angeles. “Through expanded climate policies, we have grown jobs and expanded our economies while cleaning our air. This Order moves our nation in the wrong direction and puts American prosperity at risk.”

Solar and wind energy have been creating jobs 12 times faster than the rest of the U.S. economy, according to a report last year by the International Renewable Energy Agency. Those statistics show those jobs have outpaced the growth rate of employment in the fossil fuel industry for years, and the number of U.S. jobs in solar energy overtook those in oil and natural gas extraction for the first time last year, with wages above the national median. While fossil fuel employment has slumped along with oil prices over the past two years, repeating the industry’s characteristic boom-and-bust cycle, employment in clean energy has seen steady growth as technology has improved and the price of equipment has fallen.

Maryland’s Republican governor, Larry Hogan, is about to sign legislation banning oil and gas fracking in his state and remained committed to action on climate change, his environment secretary, Ben Grumbles, told The Baltimore Sun. Grumbles, a former top EPA official in President George W. Bush’s administration, said Trump’s decision could make it harder for Maryland to meet its greenhouse gas target of 40 percent reductions by 2030. He said Hogan’s administration “will continue to focus on energy and environmental actions … that are critical to our clean air and climate change goals.”

Former New York Mayor Michael Bloomberg, co-chair of the Global Covenant of Mayors for Climate & Energy pledged earlier this month that American cities, states and businesses will deliver the U.S. commitment to the Paris climate agreement no matter what policy rollback occurs in Washington.

“Market forces, including consumer preferences and technological advancement, are the primary reason for the surge in cleaner forms of energy,” Bloomberg said in a statement following the executive order. “In fact, even without the Clean Power Plan, we are likely to hit its emissions targets ahead of schedule—because consumers, cities, and businesses will continue leading on public health and climate change even when Washington won’t.”

The Sierra Club recently did an analysis showing 60 percent of the reductions needed to meet the Paris commitment can be met outside of federal policy. But even with action by local residents, elected officials and business leaders to replace aging coal-fired power plants with clean energy, secure large investments in energy efficiency, and stop the rush to natural gas, a gap will remain without federal action. According to an ICN analysis based on research by the Lawrence Berkeley National Laboratory, the U.S. is on track to fall far short of its pledge without the Obama administration policies targeted for elimination, especially the Clean Power Plan, which alone would deliver 15 percent of the goal.

An analysis this week by the consulting firm, the Rhodium Group, projected that the policies outlined in Trump’s executive order would mean U.S. carbon emissions would not decrease through 2025. That would put the U.S. far short of its goal of reducing carbon emissions 26-28 percent from 2005 levels by that year. Obama’s policies, in contrast, would have put the U.S. “within striking distance” of the target, the analysts said.

The paper said states and local governments and business could fill some of the gap.  “This new Trumpian emissions future is not yet baked in,” the analysts said. “It will largely fall to states, cities and companies to be the driving force of U.S. climate action. “Well-designed and well-coordinated action in states and cities could play a meaningful role in offsetting some federal policy-enabled emissions growth.”

Another group of state and local leaders plan to do their part in the courts.  New York Attorney General Eric T. Schneiderman, leader of a coalition of 23 states, cities, and counties, vowed to challenge Trump’s efforts to dismantle the Clean Power Plan. “Addressing our country’s largest source of carbon pollution—existing fossil fuel-burning power plants—is both required under the Clean Air Act and essential to mitigating climate change’s growing harm to our public health, environments, and economies,” said Schneiderman.

“We won’t hesitate to protect those we serve—including by aggressively opposing in court President Trump’s actions that ignore both the law and the critical importance of confronting the very real threat of climate change.” 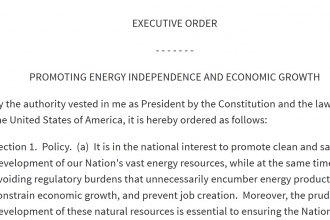