One month after a 65-year-old ExxonMobil pipeline burst without warning and dumped Canadian tar sands oil in the town of Mayflower, Ark., government investigators and residents are still looking for answers to basic questions about the spill.

When did the pipeline begin leaking? When and how did the oil company find out about it? How quickly did the company act? How much oil spilled from the pipeline’s 22-foot-long gash? And what condition was the line in before it ruptured?

The unanswered questions are urgent because they speak to issues of pipeline safety and enforcement as thousands of miles of new and reconfigured pipelines—including the Keystone XL—are being proposed to run across the United States.

Three groups are currently investigating the Mayflower spill. The Pipeline and Hazardous Materials Safety Administration (PHMSA), a branch of the Department of Transportation that is primarily responsible for developing and enforcing pipeline regulations, is handling the official federal inquiry into the cause of the pipeline rupture. Arkansas Attorney General Dustin McDaniel has launched his own investigation into the spill and is reviewing more than 12,500 pages of documents that Exxon turned over at his request. U.S. Representative Ed Markey (D-Mass.) is also doing his own inquiry of the spill.

Last week InsideClimate News sent transcripts of the 911 police reports it obtained from the Faulkner County Sheriff’s Office to Rep. Markey’s office upon its request. The transcripts are also being released publicly here.

They tell a different story than what Exxon reported to the federal government in the initial days of the spill, which was also different from what the company told the public in subsequent weeks.

(To view the document in fullscreen, click on the arrows on the bottom left.)

Below is a summary of the most pressing unanswered questions and inconsistencies. All times have been converted to local time (CDT).

When did the Pegasus pipeline start leaking, and when did Exxon find out about it?

Police records show that Mayflower resident Jennifer Dement of 50 Starlite Road North was the first to report the oil spill to local law enforcement at 2:44 p.m. on March 29. But when the pipeline ruptured, and how long it took Exxon to discover the leak, are still unclear. In the four weeks since the spill, the company has given four different answers to these questions.

In the initial incident report the company filed with the National Response Center on the day of the spill, Larry Hawthorne, an Exxon field regulatory specialist, said Exxon’s command center in Houston detected a drop in pressure on the line at 1:15 p.m. In a second NRC report filed by a different Exxon employee later that day, the time of discovery was listed as 3:20 p.m. In a third and final report, it was changed back to 1:15 p.m.

To add to the confusion, Hawthorne told InsideClimate News in an interview on April 10 that Exxon confirmed the spill when company representatives arrived on the scene at 3:15 p.m., and that any mention of an earlier detection time was a mistake by the NRC. But police transcripts don’t place Exxon representatives at the spill site until 3:43 p.m.

An NRC official checked the audio recordings of Exxon’s emergency calls for InsideClimate News and confirmed the accuracy of the incident reports.

Most recently, in an April 10 post on the company’s blog, ExxonMobil’s Perspectives, Exxon’s vice president of public and government affairs, Ken Cohen, said it first detected a pressure drop in the line at 2:37 p.m.

How did Exxon find out about the spill?

According to Exxon’s account on its blog, a low pressure alarm was received at 2:37 p.m. at ExxonMobil Pipeline Company’s Operations Control Center in Houston.

Police transcripts reveal that 911 dispatchers called Exxon about the spill at 3:19 p.m., and that company representatives arrived on the scene 24 minutes later from their field office in Conway, about 22 miles away. The transcript timeline suggests that Exxon may not have known about the spill until the police alerted the company.

How quickly did Exxon shut down the pipeline?

On its blog, Exxon said that it shut down the pipeline system within 16 minutes of discovering the pressure drop on the line. What remains unclear is when the shutdown was initiated: 1:15 p.m., 2:37 p.m. and approximately 3:20 p.m. are all possibilities. Because of the high pressure inside the line, oil escapes rapidly in a rupture, and the difference between a small spill and a big spill can be a matter of minutes.

The company also said oil continued to leak out of the ruptured area after the line was shut down. One company employee initially told the NRC that the leak lasted three hours. But according to the Environmental Protection Agency, the oil continued to leak for 12 hours after the first 911 calls came in from local residents. Exxon later confirmed the EPA’s timeline on its blog when it wrote, “oil appeared to stop seeping from the pipe at 3 a.m. CDT on March 30.”

How much oil spilled?

The size of the spill remains unknown. In the week following the pipe’s rupture, Exxon said in press releases that only “a few thousand barrels” spilled at the site. The corrective action order issued by PHMSA on April 2, said the spill was 3,500 to 5,000 barrels and that those figures came from Exxon.

During that same time, reports posted online by the EPA estimated the spill even higher—at 4,000 to 7,000 barrels—as much as 40 percent more. Exxon has since said that approximately 5,000 barrels spilled.

Estimating the size of spills is often contentious, because the volume of the spill affects the fines and penalties companies may eventually pay for violating the Clean Water Act. Fines can be as high as $1,100 for every barrel spilled. If gross negligence or willful misconduct is proven, violators can be forced to pay as much as $4,300 per barrel.

What caused the pipeline rupture?

On April 10, McDaniel announced that the rupture on the pipeline was 22 feet long and 2 inches wide. The cause remains under investigation. The damaged section of the pipe has been sent to Hurst Metallurgical Research Laboratory, Inc. in Euless, Texas, a third-party lab chosen by Exxon and approved by PHMSA.

Richard Kuprewicz, president of the pipeline consulting firm Accufacts Inc., previously told InsideClimate News that the type of tear—a “fish mouth opening” that’s wider in the middle and narrow at the ends—rules out the possibility that the rupture was caused by third-party damage such as construction activity. He said fish mouth breaches are “usually associated with crack-like features” that develop in pipelines.

In February, Exxon performed an internal inspection on the section of the Pegasus line that ruptured. Exxon told PHMSA that it has yet to receive the results, according to the April 2 corrective action order. The data is expected to provide answers to questions of whether there was trouble on the line before it ruptured. Prior to the February inspection, the last time the line was similarly inspected was in 2010. 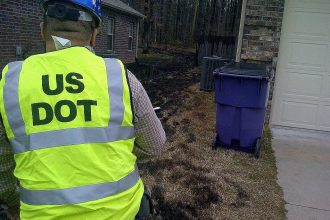 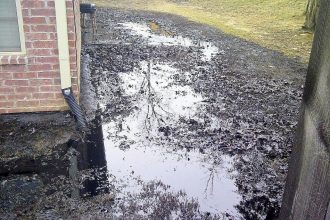