When the National Transportation Safety Board released a scathing report this month faulting Enbridge for its Michigan oil spill, speculation began instantly about whether it would harm the company’s chances for its Northern Gateway pipeline to the Pacific Coast of British Columbia.

Even without the report, however, the project’s prospects have long been slim at best.

That’s because most First Nations in B.C.—where more than half the pipeline would pass—never signed treaties ceding their lands to the Canadian government. Despite offers from Enbridge that would give them a 10 percent equity stake worth millions of dollars and other cash benefits, many still refuse to give the needed right of way, setting up a legal clash that could end up at the Supreme Court.

A single holdout could delay the pipeline for many years, if not indefinitely—even if the project wins approval from Prime Minister Stephen Harper’s Conservative government.

“Enbridge has set themselves up for a legal quagmire a lot worse than they ever considered,” said Roger Harris, a former vice-president of aboriginal and community partnerships for Enbridge Northern Gateway Pipelines.

The situation shows how difficult it will be to move Alberta’s landlocked tar sands to Asia-bound tankers on the West Coast—a long-time goal of industry that became more urgent when the Obama administration rejected the Keystone XL’s northern leg from Alberta to Oklahoma.

“Once Canada decided to give near sovereign authority to individual native groups it was like opening a pandora’s box,” said Jan Stuart, head of energy research at Credit Suisse. “How are you going to get the right of way to build such pipelines [to the West Coast]?”

Jennifer Griffith, legal counsel for the Haisla Nation in B.C., said her clients are unwilling to open their land to any unrefined petroleum product, because they fear leaks would contaminate their salmon-spawning rivers. The Gateway pipeline—like the Michigan line that ruptured in 2010, and like the proposed Keystone XL—would carry diluted bitumen or dilbit (crude oil from Canada’s tar sands) .

A seven-month investigation by InsideClimate News into the Michigan oil spill revealed that dilbit, which has the thickness of peanut butter, made traditional oil cleanup methods almost useless and compounded the concerns of health officials.

“Haisla doesn’t think this project can be done in a way that is not a threat to the health of the nation,” Griffith said.

“Haisla are not against industry,” she added.  The band, for instance, has a stake in a massive liquefied natural gas project in the same area.

Canada has more than 630 First Nations groups. One hundred and sixteen of them are in B.C. and by and large have titles to their lands. In Alberta, where 40 percent of the Gateway would cross, First Nations’ land rights were relinquished in treaty negotiations beginning in the late 1870s, as in much of Canada.

In an historic 1997 Supreme Court decision, the court ruled that First Nation land entitlements still stand in B.C. and said “Aboriginal title lands must not be used in a way that is irreconcilable with the nature of the group’s attachment to the land.”

However, the court did not give the bands blanket veto over government-approved projects but rather the right to consultation. “In order for the Crown [the government of Canada] to justify an infringement of Aboriginal title, it must demonstrate a compelling and substantive legislative objective, it must have consulted with the Aboriginal group prior to acting, and in some cases, compensation may be required,” the court said.

The lack of details in the court’s decision on what constitutes acceptable consultation, among other issues, opens the door to a torrent of litigation, experts say.

During the past six years, pipeline operator Enbridge has consulted with dozens of First Nations within 50 miles of the Gateway route in Alberta and B.C. The company offered approximately 45 of them equity agreements, worth about $7 million, to become part owners of the pipeline. Enbridge says almost 60 percent have signed deals. In exchange, they’re not allowed to “proactively” oppose the project, according to documents obtained by Greenpeace Canada through the federal Access to Information Act.

Enbridge won’t disclose the names of the signatories, which has led critics to doubt that figure. “It’s up to the First Nations themselves to disclose whether or not they entered into the agreement,” Paul Stanway, Enbridge’s spokesperson on the pipeline, said in an interview.

Two have publicly said they signed—the Gitxsan Treaty Society and The Yekooche, both in B.C. Both agreements, however, are now in question after their members protested. Support of other First Nations has proved difficult to verify, because they often can’t be reached for comment or refuse to speak to the media on this issue.

InsideClimate News called about 20 First Nations and got no answers. But using information from Harris, the former V.P. of aboriginal partnerships for Enbridge, and Art Sterritt, executive director of the Coastal First Nations, we managed to identify half a dozen more bands that likely signed equity deals before Enbridge’s May 31 deadline—the Alexander, Paul and Alexis Nakota Sioux bands in Alberta; and the Skin Tyee, Nee-Tahi-Buhn and Cheslatta Carrier in B.C.  (The Cheslatta, fearing internal protests, says they remain neutral on the Gateway.)

Others have similarly tried to nail down First Nations’ support. A CBC news report in June estimated that 18 communities had signed equity deals. A follow-up attempt to identify those bands by Media Indigena, a website dedicated to indigenous news, turned up nothing.

Whatever the number, the total isn’t enough to prevent a protacted legal battle.

Since 2010, more than 130 First Nations have signed the Save the Fraser Declaration, a formal legal document banning tar sands oil pipelines and tar sands oil tankers in the Fraser River watershed area of British Columbia, which is in the Gateway’s path.

Many First Nations might still be swayed if Enbrige or the government offers the right perks, but some bands will be determined to resist, no matter the amount of money offered. “And the question then becomes, how aggressive is the government going to get at forcing it down their throats?” said Chad Friess, an oil and gas analyst at UBS Securities Canada Inc.

“For now it looks as though the government will be fairly aggressive with ensuring that this gets through the regulatory process … Canada does not want to be dependent on the U.S. for the only market for its oil, and there are lot of Chinese companies and Asian companies investing in Canada that want to get the oil out. “

Getting a Permit vs. Getting Built

The $6 billion Gateway twin pipeline system would run 731 miles from Bruderheim, Alberta, north of Edmonton, to Kitimat, B.C., over three mountain ranges and across more than 1,000 bodies of water.

The eastern-flowing line would transport natural gas condensate to dilute raw tar sands bitumen into dilbit so it can flow through the second corridor. That westerly pipeline would carry 525,000 barrels of dilbit a day west to a new port in Kitimat, where it would travel via tankers to Asia-Pacific markets and California.

By opening access to Chinese and other Asian markets, the Gateway would give the tar sands industry a stronger market position in the global oil trade. Currently, Alberta oil can be pumped only as far as the U.S. Midwest, where a crude oil oversupply is keeping regional oil prices low. Enbridge claims the project would add $270 billion to Canadian gross domestic product over the next 30 years and create 1,150 long-term jobs, 560 of which would be in B.C.

The company’s application for the project is being assessed by a Joint Review Panel organized by Canada’s Minister for the Environment and the National Energy Board (NEB). The three-person panel began reviewing the project’s environmental impacts in 2010 and will offer a yes or no recommendation to the Harper government in early 2013. It’s then up to the Canadian cabinet to make a final decision.

Because the Gateway would cross provincial borders it has to be federally approved and regulated.

Many First Nations have denounced the review process as unfair. The 2012 Canadian federal budget, which took effect July 6, put new time restraints on environmental assessments limiting the review to 24 months. The panel was also stripped of its veto power on industrial projects like the Gateway, putting decisions solely in the hands of the cabinet.

If the Joint Review Panel recommends that the Gateway be approved, as many believe it will—and if the Canadian cabinet grants Enbridge a permit—it’s certain First Nations will sue. “Any permit would be subject to legal challenge,” said Griffith, the Haisla Nation attorney.

“We have lawyers experienced in natural resource law, waiting in the wings to work pro bono when this thing is approved,” said Sterritt, the executive director of the Coastal First Nations, a coalition representing nine aboriginal groups in B.C.

First Nations are likely to argue that they had neither the time nor resources to fully assess Enbridge’s plans for the project because the review process was expedited, said Harris. “[Enbridge’s] plans are in binders stacked 10 feet high.” Harris is now a board member at the Aboriginal Business and Investment Council and an independent consultant. He said he left Enbridge in 2010 because “we disagreed about how engagement should move forward.”

Provincial politics could also play a role. Last week, the government of B.C. said it won’t support the Gateway unless it gets a bigger cut of the project’s tax revenues and safety measures are improved. B.C. opposition could open another legal front, even with a federal permit.

Headed to the Supreme Court

Most experts agree the battle is headed to the Supreme Court of Canada, which could take many years and would put a pause on construction plans. “We’re prepared,” said Stanway, the Enbridge spokesperson.

When asked if corporate backers of Gatway might withdraw if the project gets tangled in years of lawsuits, Friess of UBS Securities said, “I guess it depends on how long it takes … The importance of sending Canadian oil to the West Coast will make sure these guys will be pretty patient.” Backers include Cenovus Energy Inc., Suncor Energy Marketing Inc., Total E&P Canada and Nexen Inc., which was acquired by the state-controlled China National Offshore Oil Company last week.

There is one major wild card, he said: the Harper government. “There’s always a threat that that government could change, and that the political interests and views of the Canadians could change.”

And if the Gateway is ultimately blocked? “It’s not going to stop the development of the oil sands,” said Friess. “It may slow it if we don’t get the Asian access.” 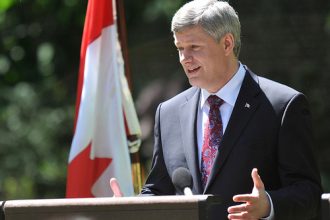