Tillerson denied that the oil giant misled investors about the risks it faced from future climate change regulations and described a detailed system he had implemented for managing those risks. But he also repeatedly said he was unable to recall key details and events that are central to the case, omissions that a lawyer for New York’s attorney general’s office returned to again and again.

While Tillerson was the most high profile and perhaps most important witness called so far in the state’s case against Exxon, the questions he faced were similar to those that lawyers and witnesses in the trial have been circling for a week now, namely: What were Exxon’s practices for assessing risk, what did it disclose about those practices, and did any of that have an impact on the company’s value.

Much of the case revolves around Exxon’s use of two different estimates for the financial impacts of future regulations—a higher estimate, which it disclosed publicly, and a lower one which it used internally and did not disclose. In 2014, top executives decided to align the two estimates, and their reasoning for doing so may prove pivotal to the case.

The attorney general’s office obtained notes connected with an internal presentation given to Exxon’s management in May 2014 that listed reasons for making the change, including that recent reports to investors had “implied” that Exxon was using the higher estimate when evaluating investments, when in fact it used the lower one.

Do you recall anyone recommending that corporate management align the costs for this reason? asked Kim Berger, the lawyer who questioned Tillerson for New York Attorney General Letitia James’s office.

“I don’t recall any discussion of that nature,” Tillerson said.

Do you recall any discussion about aligning the two estimates? she asked.

Do you recall why they were aligned?

Other senior ranking Exxon officials have testified that the decision reflected how they saw global climate policies evolving at the time. However, that reasoning was not reflected in the 2014 notes.

Wearing a navy blue suit and red tie, Tillerson then played straight man in a drama conducted by Theodore Wells, Exxon’s lead lawyer in the case and an experienced litigator. Wells belittled the attorney general’s case, saying they are spending weeks arguing over sentences in corporate reports, and gave Tillerson a platform to explain how he implemented a “robust” system to manage climate risk.

Tillerson, who retired from Exxon shortly before becoming secretary of state in the Trump administration in 2017, walked Wells and Justice Barry Ostrager through that system, which he said he implemented soon after becoming Exxon’s chief executive in 2006.

The system revolved around two parallel processes, Tillerson said. One looked at the “macro” effects of policies on the global energy system, while the other looked at “micro” impacts on Exxon’s projects.

The “macro” side was accomplished with what Exxon calls its proxy cost, an estimate of the financial impacts of global policies to limit emissions, Tillerson and other Exxon officials have said. The company used this to estimate future global demand for its products. Exxon has been disclosing this figure for at least a decade in reports it publishes annually.

The “micro” analysis for individual projects involved what the company refers to as a “greenhouse gas cost.” This was meant to estimate the expenses that specific projects, like a refinery or an oil sands project, might face. This figure was never disclosed to investors, and, until June 2014, it was lower than the proxy cost.

Whether the existence of the “greenhouse gas cost” was disclosed at all has become a central theme of the case: Exxon executives have said they disclosed the use of this method in one sentence in one of the reports it issued in 2014 in response to investor demands. The attorney general’s office has maintained that no reasonable investor could have understood what this one sentence, which was buried within a paragraph discussing the proxy cost, was referring to.

Tillerson said the proxy cost became a central tool for the company when setting its agenda, and that it was the reason Exxon devoted more investment to natural gas and began funding research into algae biofuels.

“This was critical to our long-term strategic planning,” he said.

The “greenhouse gas cost,” Tillerson said, had a narrower scope. Unlike the proxy cost, which affected all of Exxon’s operations uniformly through the demand for fuels, this cost wouldn’t necessarily apply at all facilities. Operations that had low emissions, he said, might not apply this cost in their calculations, for example.

Like the executives who had testified before him, he stressed that the company gave guidance for what these costs should be, but that ultimately local experts determined what to apply based on their knowledge of local regulations or the political environment.

Neither side brought up Tillerson’s use of an alias email account while CEO, under the name “Wayne Tracker” (Wayne is his middle name). Once the attorney general’s office learned of the account, it issue a subpoena for its contents, but years of those emails had been erased by the company. Tillerson had testified in a deposition that he conducted all business under this Wayne Tracker account.

A Lower Estimate for the Oil Sands

Throughout the trial, the attorney general has been highlighting evidence showing that, even after Exxon aligned the two carbon cost estimates in 2014, planners in Alberta who worked on the company’s oil sands projects actually applied much lower estimates for the costs these operations would face in the future.

Projects in Canada’s oil sands, or tar sands, are among the most expensive and greenhouse  gas-intensive sources of oil. They also operate for decades, so they are among the most vulnerable types of oil investments to any taxes or fees that may be placed on emissions.

Berger asked Tillerson if he would be surprised to learn that when the planners in Alberta applied the new, higher cost estimates in late 2014, their work showed that these oil sands operations could face huge expenses in future years?

“I don’t have any knowledge of that,” Tillerson replied.

Do you have any knowledge that, in reaction to the potential for these high costs, she asked, planners in Canada decided instead to apply a different, much lower estimate, based on Alberta’s local carbon fee?

“I’m not aware of that,” Tillerson said.

She pressed Tillerson, asking if he was aware that the planners had applied that lower estimate indefinitely into the future, effectively assuming that neither Alberta nor Canada would raise the taxes they impose on carbon over decades into the future. Tillerson said he didn’t recall. He did add, however, that because oil sands projects have high emissions, “we would talk about the impact,” but that he didn’t recall getting into this level of detail.

Later, Tillerson provided the first explanation anyone at Exxon has given for why planners might assume that greenhouse gas costs would stay flat for decades, even as the company expected governments globally to increase those costs in coming years.

He said the oil industry is critical to Alberta’s economy and that in the decades that Exxon has been operating there, regulations have waxed and waned as pressure on the industry has come and gone.

“What I do know,” Tillerson said, “is the Alberta government doesn’t want to put the oil sands out of business.” 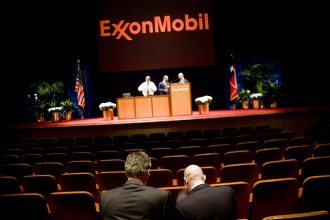 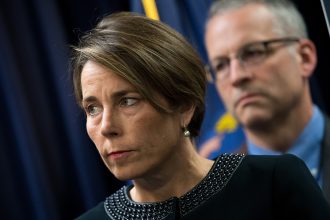 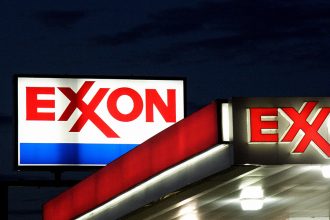