Update (Feb. 2, 2017): Republicans voted on Feb. 2 to advance EPA nominee Scott Pruitt to the full Senate for a vote, despite Democrats’ opposition and a boycott.

Senate Democrats boycotted a committe vote Wednesday on President Donald Trump‘s pick to lead the Environmental Protection Agency, Oklahoma Attorney General Scott Pruitt, preventing the vote from occurring. The boycott came after Democrats complained Pruitt has not adequately addressed the 1,078 additional questions they sent to him after his confirmation hearing.

The questions covered a range of topics, including conflict-of-interest concerns over Pruitt’s deep ties to the fossil fuel industry and his views on climate change. (He has dismissed the scientific consensus.)

Among the questions were his views on ocean acidification—the absorption of carbon dioxide into the sea that’s changing the chemical balance of oceans and putting marine ecosystems in grave danger. It has become one of the most worrisome and intensely studied effects of the climate change crisis. In his answers Pruitt positioned himself as a doubter on this issue. As EPA head, he would be responsible for regulating emissions of carbon dioxide, which is at the root of the problem.

In this graphic, we compare what Pruitt told Congress to what the science says. 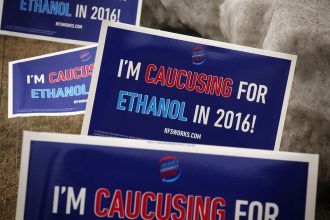