President-elect Donald Trump announced his choice for administrator of the Environmental Protection Agency on Thursday, naming Oklahoma Attorney General Scott Pruitt, a climate denier with deep ties to the fossil fuel industry and a relentless antagonist of the agency he will soon helm.

In his five years as attorney general, Pruitt, a Republican, aligned himself with oil and gas corporations in his energy-rich state and spearheaded litigation against far-reaching pollution rules issued by the Obama administration.

Pruitt sued unsuccessfully to derail EPA limits on toxic air pollutants from power plants, such as mercury and arsenic. He has argued against federal oversight over hydraulic fracturing, despite the documented increase in earthquakes in Oklahoma induced by fracking-related activities. He lobbied the EPA to drop efforts to reduce methane leaks at oil and gas sites, sending the regulator a near-verbatim copy of a memo drafted by the gas producer Devon Energy, according to a 2014 New York Times article.

More recently, Pruitt has helped lead a coalition of Republican attorneys general suing to quash the EPA’s Clean Power Plan, Obama’s signature climate effort to reduce greenhouse gas emissions from electricity generation. Pruitt has decried investigations by Democratic attorneys general seeking to determine if ExxonMobil misled shareholders by funding climate denial groups, arguing in an op-ed in the National Review last May, that debate on climate change “is far from settled” and that the company is exercising free speech. “Dissent is not a crime,” it said.

Trump’s position on climate change has been to deny it, to announce his intention to exit the Paris climate agreement and gut Obama’s climate action plan. A series of appointments to his transition team, including Myron Ebell, suggested that his inner circle is hostile to climate science and global warming action.

But in the last few weeks, Trump has made comments and gestures that hinted he might be moderating campaign rhetoric that dismissed climate change and called for the dismantling of the EPA.  He told the New York Times he believed there was “some connectivity” between human activity and global warming, and he met on Tuesday with former Vice President Al Gore. The selection of Pruitt to lead the EPA, however, erases hopes of climate action. It suggests that the new administration will weaken or eliminate rules to reduce pollution from fossil fuel companies, under the cover of backing states’ authority as opposed to onerous federal rules.

The Clean Power Plan is “extraordinary in scope, extraordinary in costs, and extraordinary in its intrusion into the sovereignty of the States,” Pruitt said in testimony before the House Science, Space, and Technology’s Committee’s environment panel in May. “And all done not by this body, but by nameless, faceless, and politically unaccountable bureaucrats.”

He added: “EPA was never intended to be our Nation’s frontline environmental regulator…The States were to have regulatory primacy. The EPA was to be a regulator of last resort.”

The fossil fuel industry applauded Pruitt’s selection. “Scott Pruitt has proven that he is a legal expert, which is exactly what our nation needs at the helm of the Environmental Protection Agency,” Chad Warmington, president of the Oklahoma Oil & Gas Association, said in a statement. “States are meant to take a leading role in determining environmental standards, and Pruitt has been an ardent defender of this concept.”

Sen. James Inhofe (R-Okla.), the chairman of the Environment and Public Works Committee and Congress’s most vocal climate denier, welcomed a like-minded pick to run the EPA. “Pruitt has fought back against unconstitutional and overzealous environmental regulations like Waters of the U.S. and the Clean Power Plan,” he said. “He has proven that being a good steward of the environment does not mean burdening taxpayers and businesses with red tape.”

Pruitt is close to a key Trump adviser, Harold Hamm, the billionaire chief executive of Continental Resources, one of the largest oil and gas companies in Oklahoma and in the newer fields of North Dakota. Hamm was the honorary chair of Pruitt’s 2014 re-election campaign, and he is also an energy adviser to Trump. As a result, several people in Hamm’s orbit have emerged as contenders for cabinet posts, including Oklahoma Gov. Mary Fallin for Interior Secretary and North Dakota Rep. Kevin Cramer for Energy Secretary.

Pruitt established the first “federalism unit” in his office, “to combat unwarranted regulation and overreach by the federal government,” he said on his LinkedIn profile. He calls himself “a national leader in the cause to restore the proper balance of power between the states and federal government,” and a “leading advocate against the EPA’s activist agenda.”

He has filed legal challenges to EPA’s rule to reduce regional haze pollution, and its “Waters of the U.S. Rule,” which is meant to clarify the agency’s authority over streams and wetlands—a regulation bitterly opposed by the oil and gas industry. But his most aggressive litigation has been against the Obama administration’s centerpiece climate change initiative, the Clean Power Plan.

Pruitt took the unusual step of filing suit against the Clean Power Plan more than three months before the final regulations were published. And he filed it less than a month after another court had ruled it was too early to sue. U.S. District Judge Claire Eagan in Tulsa, an appointee of President George W. Bush, dismissed Pruitt’s case, noting that Oklahoma was one of numerous parties that the previous court said were “champing at the bit to challenge EPA’s anticipated rule restricting carbon dioxide emissions from existing power plants.”

When EPA issued the rules in October 2015, Pruitt sued again, but he did not join in the big petition by 24 states. Oklahoma was one of just three states, along with North Dakota and Mississippi, to file their own petitions. The U.S. Supreme Court granted a stay of the rule earlier this year.

“We have never had anyone come into the office of administrator with the track record and mindset of questioning the agency’s mission and undermining what the agency does,” said Robert M. Sussman, deputy EPA administrator under President Clinton and senior policy counsel to the EPA administrator under President Obama.  “I have to believe that Pruitt thinks he has a mandate from Trump to radically scale back what the EPA does and countermand regulations issued by the Obama administration and keep a tight lid on new regulations.”

Environmental groups and Congressional supporters of climate action reacted to the selection with outrage.

“Pruitt’s made it his career goal to protect fossil fuel industry profits — he has no place running the EPA,” the League of Conservation Voters said in a statement.

Johnson Bridgwater, director of the Oklahoma chapter of the Sierra Club, said that if Pruitt were interested in states taking the lead on health and safety, he would have initiated legal action over the more than 20,000 fracking-related earthquakes that have rocked Oklahoma in the past six years. “We have an earthquake crisis in our state and he has been completely absent,” while citizens have filed their own lawsuits over the problem, said Bridgwater.

Pruitt has been an energetic defender of oil and gas companies that work in Oklahoma, whose economy is heavily reliant on fossil fuels. A 2014 Pulitzer-prize winning series in the New York Times about Republican AGs’ close collaboration with corporate interests documented how Pruitt sent a three-page letter to the EPA protesting new methane rules, without disclosing that lawyers for Devon Energy had written it for him.

Over his 14-year career as a politician in Oklahoma, Pruitt, 48, has raised $3.1 million, including about $345,000 from the energy industry, according to the National Institute on Money in State Politics. Only one other business group—banks and real estate—contributed more to him. Among his largest energy industry contributors were Chesapeake Energy, Devon Energy and Koch Industries.  Also, Pruitt raised more than a third of his campaign money, $1.1 million, in 2014, a year when he was running unopposed for re-election as attorney general. One of his largest donors in 2014 was ExxonMobil.

In his defense of ExxonMobil’s climate record in the National Review, Pruitt and his co-author, Alabama Attorney General Luther Strange, relied on the long debunked argument that climate change science is unsettled.

“Scientists continue to disagree about the degree and extent of global warming and its connection to the actions of mankind,” they wrote. “That debate should be encouraged—in classrooms, public forums, and the halls of Congress. It should not be silenced with threats of prosecution.”

New York AG Eric Schneiderman, a Democrat who is leading the inquiry into Exxon’s history of climate denial, called Pruitt “a dangerous and unqualified choice.”

Some Senate Democrats said they would fight Pruitt’s nomination, which can be approved by a simple majority vote. Republicans hold a narrow edge in the Senate. Under the rules, no filibuster would be allowed. 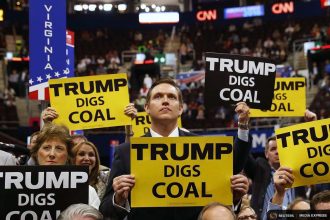