Aside from Mitt Romney’s recent jab at Barack Obama’s concern over global warming—and the president’s tit-for-tat response—climate change has been largely under the radar in the campaign.

But several groups, backed by hundreds of thousands of petitions, are trying to change that, at least for one night.

Nine environmental organizations Friday delivered more than 160,000 petitions to Jim Lehrer urging him to ask a question about climate change during Wednesday’s first presidential debate. The goal is to bring attention on a national stage to an issue that’s been pushed aside in the election, said Mike Palamuso, a spokesman for the League of Conservation Voters, one of the groups involved in the petitions.

“They talk about key moments in the election. One is the VP pick. Another is the respective party conventions, and the third is the debates,” said Palamuso. “Two of those have passed, so in some regards this is the last big event in the presidential election.

“It represents an opportunity where millions of voters are tuning in … to have this front and center.” The advocates’ push follows a poll showing that global warming is one of the most important issues to 61 percent of undecided voters.

Wednesday’s 90-minute televised debate at the University of Denver—the first of three this month—will focus on domestic issues. A list of topics released by Lehrer showed a focus on the economy, governing style and health care.

The petitions are just one of several attempts to get climate change added to that list. 350.org, a climate advocacy organization founded by author and activist Bill McKibben will put up a billboard in Denver this week asking for more climate talk. Friends of the Earth Action and Forecast the Facts teamed up for a social media campaign called “Climate Silence” to urge more talk on the trail, and beyond.

The goal, said 350.org media campaigner Daniel Kessler, is to create so much discussion around the topic that “Lehrer just can’t ignore it.”

“It’s less up to him, but it’s on us to create enough noise about this,” Kessler said. “Climate change touches on so many issues, including agriculture and jobs and the economy, so there’s always a chance to work it in. But we’re still not at that point.”

Although Obama talks about clean energy as a way to improve the economy, he has made scant mention of climate change. That’s a sharp departure from the last presidential election, when both he and Republican candidate John McCain bolstered the consensus that global warming is real, man-made and pressing.

But skepticism about climate science has become part of the GOP’s core message, and political urgency in Washington to curb emissions has faded. Romney—who once supported carbon regulations—had his biggest climate moment of the campaign in the form of mockery.

“President Obama promised to begin to slow the rise of the oceans and heal the planet,” Romney said in his convention speech. He paused as laughter erupted, adding, “My promise is to help you and your family.”

That merited a response from Obama during the Democratic convention the following week. “My plan will continue to reduce the carbon pollution that is heating our planet, because climate change is not a hoax.”

But that was the extent of the discussion.

And so the debates—particularly the first debate, which is traditionally the most watched—offer a chance to discuss the issue in front of tens of millions of voters from both sides of the aisle.

Generally, environmental issues haven’t been voting priorities for most Americans, said Marjorie Hershey, a professor of political science at Indiana University, who specializes in campaigns and elections. “To increase citizens’ understanding and concern, these issues need to make it onto the political agenda. One way to do that is to include it in the presidential debates, where the audience for politics is much higher.”

In fact, University of Missouri communications professor Mitchell McKinney said that merely mentioning an issue during a debate can help elevate it in voters’ minds. McKinney has tracked presidential debates for more than two decades, including viewers’ responses. He has found that voters’ “issue agendas” tend to change before and after debates.

“An issue, especially one like climate change, may not register on people’s issue agendas, but if it gets mentioned during a debate we find it creeps up there,” McKinney said. For example, he said that transportation infrastructure didn’t rank highly in voters’ minds until it was brought up during a 1992 debate.

Climate advocates sense an opportunity with the first debate, which is why they are doing so much outreach over the next few days. The New York Times reported that 50 million people are expected to tune in on Wednesday.

“Obviously [the president] talks about clean jobs when he travels to Iowa or Colorado and he’s making a point to draw a difference between himself and Romney,” Kessler said. “But the debates are so much more important.”

Robert Watson, an American studies professor at Lynn University, said that all of the attention being paid on Wednesday’s event may be somewhat misguided. The second debate—a town hall format—could feature a climate question, but Watson said the real discussion may come at the third debate, held at his university in Florida two weeks before the election.

“The third debate is all about foreign policy … and it seems to me one topic should be, and could be, climate change,” Watson said. “It offers a perfect example to contrast Obama and Romney on global policy, their views on science and their view on the world.”

Whatever happens in the debates and in November, advocates have made it clear their efforts to build pressure for climate policies will continue.

The Presidential Climate Action Project, a climate and energy security think tank, released a report on Monday outlining a menu of climate and energy policies the president can take without Congressional approval. The study, which includes recommendations like pricing carbon, follows previous PCAP reports timed to administration transitions.

The Climate Silence campaign is similarly looking beyond the 2012 elections, setting up a social media effort to stop the “slow, collective descent toward mute acceptance of global calamity” and compel politicians to bring up the issue.

And 350.org, among other actions, has organized a national speaking tour led by McKibben that launches the day after the election, called “Do the Math.”

The post-election campaign builds off an article by McKibben, published in Rolling Stone, that uses math to explain why the world must now transition to green energy. The crux of his argument is that countries can only burn 565 more gigatons of carbon by mid-century to keep global warming limited to a rise of 2 degrees Celsius. McKibben says energy companies now have five times that amount in their reserves.

The goal, said Kessler, is to spark a new and more substantive conversation after the noise of the campaign subsides. “It’s … hard to break through during this crazy time around the election.” 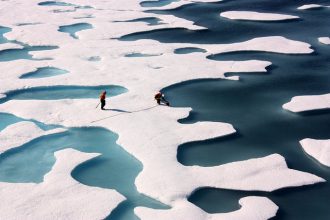 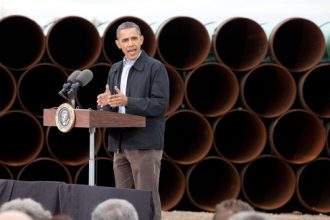