This story was last updated on 10:55 am ET on June 3, 2016, to reflect the responses from attorneys general.

Several state attorneys general, advocacy groups and philanthropic foundations have refused to comply with a broad request from a group of House Republicans for documents that might be related to state investigations of ExxonMobil Corp. over climate change.

In their letters to Rep. Lamar Smith, the Republican chairman of the House Science, Space and Technology Committee, most of the organizations said the lawmakers were overstepping the panel’s jurisdiction in order to conduct a partisan fishing expedition while threatening the groups’ First Amendment rights to freedom of speech and association.

“The right to petition government and to disagree with certain government officials is a core value protected by the First Amendment,” said lawyers for 350.org, a nonprofit environmentalist group, in a letter to the committee.

“Because your letter does not and cannot provide any legitimate justification for this infringement upon First Amendment rights, our client respectfully declines to provide documents in response,” the 350.org letter said.

Prosecutors in New York, Maryland, California and the Virgin Islands are investigating whether Exxon’s statements and actions on climate change violated consumer or investor protection laws or racketeering statutes.

InsideClimate News and later the Los Angeles Times, as well as other journalists, have reported on the history of Exxon’s emerging understanding of climate change science in the 1970s and 1980s. Those reports also detailed Exxon’s subsequent efforts to undermine the scientific consensus that combustion of fossil fuels was leading to potentially catastrophic global warming.

Smith’s office referred questions to the committee. A committee spokeswoman did not respond to a request for comment. It’s unclear whether the other organizations or attorneys general responded.

Schneiderman’s office wrote the lawmakers’ demands were “premised on a series of incorrect statements and assumptions” and presented “serious constitutional concerns, including the lack of congressional jurisdiction over state law enforcement activities.”

In refusing to cooperate, Oregon’s Attorney General Ellen Rosenblum made it clear that her office would not be bowed by Smith.

“In sum, the Oregon Attorney General intends to continue to look into possible violations of state law, and she will continue to work, when appropriate, with other states’ law enforcement officials,” according to a letter written by Frederick M. Boss, a deputy attorney general.

In separate letters to Smith Wednesday, the non-profit organizations cited the First Amendment in objecting to the demand for their documents, arguing that the committee members were standing up for Exxon’s free speech rights while trampling theirs.

“To be clear, Greenpeace will always cooperate with any authorized and legitimate inquiry of Congress or anyone else into one of the most pressing issues of our time, one that will affect our children and their children for generations to come,” wrote Greenpeace’s attorney, Abbe David Lowell, a prominent Washington defense lawyer.

The Greenpeace letter blasted the lawmakers for seemingly concluding in advance that “the activities of the state attorneys general ‘were efforts to silence speech.’” Citing published reports that the prosecutors are investigating whether Exxon violated securities and consumer fraud laws by “making false statements,” Lowell wrote that “the law does not protect the dissemination of false statements.”

“These alleged false statements occurred in public and were made to affect the behavior of consumers and investors,” according to the letter. “In other words, while Greenpeace’s work on climate change has been to follow the science, the fossil fuel industry is being investigated for trying to cover up that science.”

The Rockefeller Brothers Fund likewise told Smith it was refusing the request because the documents were protected by the First Amendment.

“It appears like a partisan effort by a group of Republicans in the House trying to shut down public debate on a vital public matter on behalf of the fossil fuel industry,’’ said Stephen Heintz, president of the Rockefeller Brothers Fund, in an interview.

In the foundation’s official response, attorney Harry Sandick said: “It is not clear to us what valid legislative purpose lies behind the request for documents to the extent that the committee seeks to regulate the conduct of state attorneys general.”

The Union of Concerned Scientists said in its four-page letter that the lawmakers’ request exceeded the powers of Congress.

The organization acknowledged that the Science Committee does have jurisdiction over environmental and scientific programs.  But the lawmakers’ request goes far beyond any such mandate, UCS said in its letter.

“To permit legislative inquiry to proceed on less than an adequate foundation would be to sanction unjustified and unwarranted intrusions into the very heart of the constitutional privilege to be secure in associations in legitimate organizations engaged in the exercise of First and Fourteenth Amendment rights,” the UCS attorney wrote. The Fourteenth Amendment deals with due process and relations between states and the federal government. 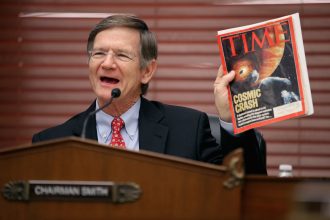