Portland’s city council voted unanimously on Wednesday for a resolution opposing new projects that would increase oil train traffic near Oregon’s capital and in the neighboring city of Vancouver, Wash.

The resolution, which was approved by Portland Mayor Charlie Hales and the three city commissioners present Wednesday, comes as Washington Gov. Jay Inslee mulls the fate of what would be the country’s largest oil terminal, proposed for the Port of Vancouver. It would be located less than 10 miles away from downtown Portland across the Columbia River.

If approved, the $190 million complex would handle up to 360,000 barrels (or 15 million gallons) of oil a day. Much of it would travel by rail through Portland and surrounding communities.

“With this amount of oil comes an enormous amount of risk,” Cristina Nieves, policy advisor and executive assistant to the bill’s primary sponsor, Commissioner Amanda Fritz, said at the meeting. Nieves listed several fiery oil train accidents that have jolted communities North America, most notably a train explosion that killed 47 people in Lac-Mégantic, Quebec in July 2013.

The project also has a huge estimated carbon footprint. If all the incoming oil is burned, it would release more than 56 million metric tons of carbon pollution annually. That’s almost the same greenhouse gas pollution generated by 12 million cars, estimates the environmental group Columbia Riverkeeper.

Vancouver’s city council passed a resolution last June denouncing the project based on its risks to public health and safety, as well as the environment, which it said outweighed any associated economic opportunities, such as jobs and tax revenue.

Portland’s resolution, co-sponsored by Mayor Hales, “makes clear our support of Vancouver City Council’s decision and … I hope the resolution will urge Governor Inslee to oppose the project as well,” said Nieves.

Inslee will make a decision after he receives a recommendation in the next two weeks from members of the Energy Facility Site Evaluation Council (EFSEC). When EFSEC hands over all the project-related documentation to the governor, the package will include Portland’s resolution, which does not prevent new oil projects from being constructed but instead puts the city’s disapproval on record.

Another resolution was proposed by Hales and Fritz on Wednesday that would effectively ban new fossil fuel projects in Portland. A vote on that resolution, which climate activist and 350.org founder Bill McKibben called “visionary” in a recent editorial, was postponed until next week.

If it passes, a proposed propane facility in Portland would likely be blocked; however, it would not impact the Vancouver terminal because it is located across the state border in Washington.

About 100 people came to testify Wednesday on the resolutions, a diverse group that included longshoremen, middle schoolers, physicians, economists, and singing grandmothers.

The Pacific Northwest has received roughly 12 proposals for new oil transport and storage facilities in recent years. Energy companies are trying to make the region the country’s next major oil export hub, but they’ve faced increasing pushback from residents. Protests have included fossil fuel divestment campaigns, rallies, and dramatic efforts to stall Royal Dutch Shell’s Arctic-bound ships, such as blockades by kayaktivists in Seattle and activists dangling off the St. John’s bridge in Portland. 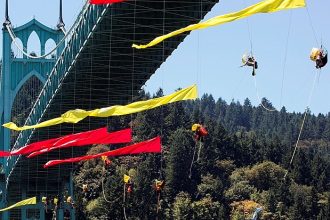 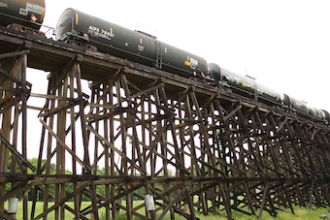 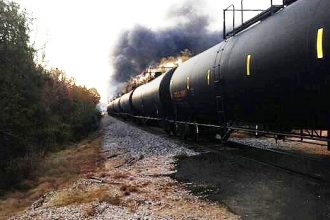