More than three and a half years after an ExxonMobil pipeline spilled 63,000 gallons of oil into the Yellowstone River, the world’s second-most-valuable company is still fighting regulators over being assessed a $1 million fine.

Exxon last month attacked the legal underpinnings of the government’s case, which stems from the July 2011 rupture of the Silvertip Pipeline near Laurel, Mont. The oil giant argued that it complied with federal regulations and that pipeline regulators overstepped their authority in interpreting the legal requirements. It also said that all but one of the violations should be dropped and that the government should, at a minimum, “significantly reduce” the penalties.

Alexis Bonogofsky, whose family farm was inundated with oil from the spill, thinks the penalty is already too low.

“As an impacted landowner, it’s upsetting to me that these fines are so tiny for someone like Exxon,” said Bonogofsky, who is also tribal lands manager for the National Wildlife Federation in Billings, Mont. Exxon, which is second only to Apple Inc. in market value, took in $32 billion in 2014, a sum equal to $88 million per day.

Bonogofsky said her family has for years produced hay and raised goats on the 100-acre farm adjacent to the Yellowstone River. Despite being eight miles downstream, the farm sustained so much damage from the spill and the cleanup that nothing grew on the oil-fouled land for two years, she said. Bonogofsky and 12 other landowners recently settled a lawsuit against Exxon for $2 million.

Earlier this year, the Yellowstone River was fouled by another oil pipeline break. This time it was the Poplar Pipeline, which ruptured near Glendive, Mont., and sent more than 30,000 gallons of oil into the river. The cause of the Jan. 17 spill is still under investigation, but the pipeline was found to be uncovered and unprotected at the time of the break—as was Exxon’s Silvertip pipeline.

The current fine of $1.045 million for the Silvertip spill has already been lowered once. The original penalty of $1.7 million was reduced after Exxon appealed the proposed fine and argued its case in a July 2013 closed hearing. The Pipeline and Hazardous Materials Safety Administration (PHMSA)’s final order, made public in January, removed one of the violations and included the smaller fine.

Around the time of Exxon’s hearing with PHMSA to contest the original $1.7 million fine, an indignant state legislator and a group of 50 residents and local environmentalists protested in a park alongside the Yellowstone. They held signs that read, “Exxon Pay Your Spill Fine,” and “Take Responsibility,” and alternated chants between “Beep beep. Toot toot. Hey Exxon, get off that loot,” and “Three, five, seven, nine. Exxon ought to pay that fine,” according to the Billings Gazette.

The National Wildlife Federation and three regional environmental groups also sent a letter to Montana senators Max Baucus and John Tester and U.S. Rep. Steve Daines, urging them to support the original penalty, calling it “appropriate, defensible and necessary” given the extensive damage from the spill.

Exxon’s new challenge, called a petition for reconsideration, is a step that is “unusual but not rare,” according to Rebecca Craven, program manager at the Pipeline Safety Trust, a nonprofit group that tracks pipeline risks and regulations. She said Exxon’s arguments will be reviewed and decided on by Jeffrey Wiese, PHMSA’s associate administrator for public safety. There is no timetable for a decision.

An Exxon spokesman declined to elaborate on the company’s petition.

Exxon’s challenge in the Silvertip case reinforces its reputation for undertaking protracted legal challenges to penalties and court judgments. Most famously, the company kept alive many cases related to the 1989 Exxon Valdez spill in Alaska for more than a decade. In one Exxon Valdez-related case, a fight over interest owed on attorneys fees made it to the Alaska Supreme Court for a ruling—in August 2014

More recently, Exxon appealed a $2.7 million fine stemming from the 2013 rupture of its Pegasus Pipeline in Mayflower, Ark. PHMSA has not issued a final ruling in that case.

Exxon Had Plenty of Warning of Dangerous Conditions

The Silvertip pipeline is about 70 miles long and carries crude oil from Wyoming to Exxon’s refinery in Billings, Mont. It was buried in a trench at least six feet below the Yellowstone River in 1991.

When the pipeline broke in July 2011, seasonal snow melt runoff had caused the Yellowstone to reach especially high flood levels after flooding in May and June. Regulators and Exxon believe the flood waters scoured away the dirt covering the Silvertip and then the pipe was broken open by large debris that was racing down the river.

In its final ruling, PHMSA said that Exxon failed to consider the threat of flooding and river-bottom scour and other related dangers that should have been included in the company’s Silvertip risk analysis.

“One of the purposes of the integrity management regulations is to anticipate the possible threats to the pipeline in the future,” PHMSA said in its Jan. 23, 2015 final order. “Given that flooding is a threat in general, and that flooding has caused integrity issues for other pipelines at the same location, it was not reasonable for [Exxon] to assume seasonal flooding would never impact its own pipeline.”

PHMSA’s rules give pipeline operators broad leeway to decide how best to prevent a spill that would cause harm to people and the environment. In effect, they tell operators that they must “do what you need to do to prevent incidents,” said Craven of the Pipeline Safety Trust.

In its Feb. 12 petition, Exxon took issue with PHMSA’s conclusion that the oil company violated rules by not considering flooding a high risk.

The essential issue in the case is whether PHMSA “can conclude, after the fact, that a regulated entity should anticipate and prevent every possible accident, or else be found liable for some perceived violation,” according to Exxon’s petition.

“Under applicable law, it was acceptable and reasonable for [Exxon] to consider the risks of flooding and conclude that flooding was not a significant risk to its pipeline at this river crossing,” the company said.

In this case, however, Exxon had plenty of warning that the Yellowstone River flooding in 2011 had reached unusually dangerous levels. Officials from Laurel repeatedly expressed concern about the Silvertip and other pipelines in the weeks leading up to the rupture—and at one point sent pictures to Exxon asking them to come assess the situation.

In response, Exxon shut down the pipeline twice and reviewed conditions at the crossing. It checked the depth of cover at a valve upstream from the rupture site and found it to be between at least 6.7 feet. Exxon added sandbags around the valve area, according to PHMSA, but kept the pipeline operating.

On July 1, the Yellowstone hit flood stage for the third time in six weeks. Exxon’s operator missed the first alarm that went off when the pipeline ruptured, and Exxon operators didn’t close a key valve until almost an hour later. The delay allowed a long segment of the pipe to drain oil into the Yellowstone, significantly worsening the spill. 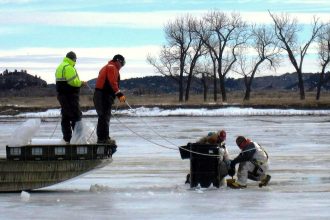 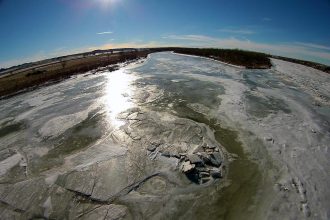 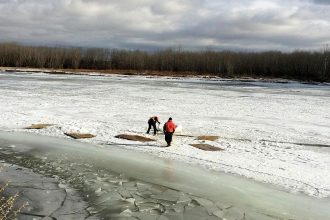