American voters are in a tough spot: With five Democrats and 17 Republicans vying for the Oval Office in 2016, the U.S. has one of its largest pools of presidential candidates in nearly a century—making the task of navigating their stances on the issues more onerous than usual.

On the issue of climate change, while most Democrats are strong proponents of climate action and most Republican contenders fall on the side of denial or hedging about the human role in climate change, there are subtle differences even among candidates of the same party.

To make things easier, InsideClimate News has ranked the climate views of the 10 presidential candidates currently leading in the polls (plus wildcard Joe Biden, who political insiders say could still very likely run).

A previous version of this graphic incorrectly listed Jim Webb as a Republican. He is a Democrat. 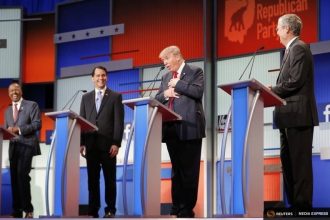 Climate Is a Non-Issue in GOP Primary