Billionaire Michael Bloomberg is donating $30 million to bolster the Sierra Club’s 13-year-old campaign to end America’s reliance on coal, one of the biggest sources of greenhouse gases. The grant will bring the former New York City mayor’s support for the program to $80 million since 2011.

In reporting the gift Wednesday, the Sierra Club said it obtained a matching $30 million in combined donations from more than a dozen additional funders. They include the Hewlett Foundation, the John D. and Catherine T. MacArthur Foundation, the Yellow Chair Foundation, the Grantham Foundation and the Sandler Family Foundation.

With the increased funding, the Sierra Club will expand its goal to retiring or getting pledges to retire half of the nation’s power plans by 2017, up from one-third by 2020, according to Mary Anne Hitt, director of the Beyond Coal campaign. Since 2010, coal-fired plants generating more than 26,000 megawatts have closed, and stations representing 51,000 megawatts more are set to shut down soon—totaling 187 stations. Bloomberg’s 2011 grant enabled the Beyond Coal campaign to add 180 staffers and expand to 45 states.

“Coal’s days are numbered,” Bloomberg said. “It is an outdated technology, it is holding back our economy, and it is hurting our health.” The Sierra Club’s anti-coal work has had a “measureable, big difference in a short amount of time,” he said.

Bloomberg is the world’s 14th richest man, with a $36.3 billion fortune from his financial data company Bloomberg LP, according to Forbes. He served as mayor of New York City for three terms, from 2002 to 2013, and helped transform the city into a global leader on climate change. His charity organization, Bloomberg Philanthropies, also supports gun control, education, public health and the arts.

The Sierra Club launched its Beyond Coal campaign in 2002 in response to policy changes by President George W. Bush and Vice President Dick Cheney that fostered continued growth of the coal industry. Fossil fuel companies spent millions of dollars over the past decade fighting proposed greenhouse gas regulations and the expansion of renewable energy.

While the Clean Power Plan “closes one of the coal industry’s biggest loopholes—being able to emit 100 percent of their carbon pollution into the air for free—it is only one piece of the puzzle,” Hitt said. The plan doesn’t address the other pollution problems associated with the fossil fuel, such as mountaintop-removal mining or coal ash spills.

“Our old grant from Bloomberg Philanthropies is running into its final hours,” she said. “Clean energy has come into its own, and can hold its own against coal now.”

The environmental organization and the former mayor differ on one major aspect of a post-coal energy economy: Bloomberg supports replacing the fossil fuel with natural gas, which releases much less carbon dioxide, and thus would seemingly be better for curbing climate change than coal. However, recent research shows that leaks from natural gas drilling and transportation release high levels of methane, a greenhouse gas more potent for global warming than carbon dioxide.

In a 2012 Washington Post op-ed, Bloomberg and George P. Mitchell, who pioneered hydraulic fracturing technology, wrote, “Fracking for natural gas can be as good for our environment as it is for our economy and our wallets, but only if done responsibly.”

By contrast, the Sierra Club has increasingly called for bans on natural gas drilling because of its public health and environmental impacts. Hitt said the differences between Bloomberg and the organization’s position on natural gas don’t affect the Beyond Coal partnership.

“Our main focus is retiring coal plants and replacing them with renewable energy projects,” she said. Bloomberg Philanthropies “is very comfortable with that.” 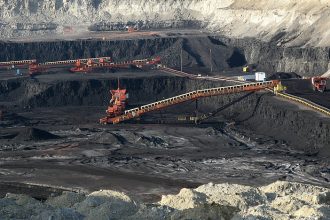