Enbridge Inc. has reached another settlement in connection with its massive oil pipeline spill into Michigan’s Kalamazoo River five years ago. The Canadian company will pay nearly $4 million to fund several restoration projects as a part of an agreement with the U.S. Department of Justice’s Environment and Natural Resources Division.

The announcement earlier this week comes less than a month after Enbridge reached a $75 million settlement with Michigan officials to fund cleanup and restoration of areas fouled by the July 2010 spill, which dumped more than one million gallons of heavy crude oil into the Kalamazoo.

Under terms of the settlement announced Monday, Enbridge will pay federal, state and tribal agencies for damages to natural resources. Those funds are earmarked for several restoration projects, including increasing floodplain capacity along two tributaries to the Kalamazoo; restoration of wild rice beds in areas along the river; and protecting turtle reproduction in the affected area of the river.

“This settlement will go a long way toward correcting the injuries to injured natural resources along the Kalamazoo River,” John C. Cruden, an assistant U.S attorney, said in a news release announcing the settlement.

Company spokesman Michael Barnes said “the agreement underscores Enbridge’s commitment to restoring the Kalamazoo River and Talmadge Creek so they can be enjoyed by all Michiganders and visitors to the State of Michigan.”

The settlement addresses Enbridge’s liability for damages under the Oil Pollution Act and Michigan’s Natural Resources and Environmental Protection Act.

It does not resolve any possible fines in connection with the federal Clean Water Act, regulations that carry the potential for penalties far greater than any so far imposed on Enbridge. While Enbridge is bracing for penalties of up to $25 million, environmental organizations and environmental law experts have calculated fines could reach $200 million or more under the Clean Water Act.

There has been no indication of when a settlement with the Justice Department and the Environmental Protection Agency over any water act violations may occur.

“We were a little taken aback when we first saw the announcement, because the headline didn’t make it clear that this settlement only resolves the Natural Resource Damage Assessment claims,” Craven said.

“Resolving the Clean Water Act is yet to come, and that’s the big one,” she added. “That’s the one where Enbridge faces the its biggest liability.”

When it ruptured, Enbridge’s Line 6B was carrying bitumen, a thick crude oil mined from Canada’s tar sands region that is diluted with a cocktail of liquid chemicals to allow it to flow through pipelines.

The oil’s composition presented a unique cleanup challenge. When the thinning chemicals evaporated, the bitumen—or dilbit, for diluted bitumen—sank to the river bottom.

That meant that conventional cleanup measures designed to clean up oil floating on the surface of the water no longer worked. The oil sunk to the river bottom in sticky, marble-sized globs.

Ultimately the oil pushed nearly 40 miles downriver, triggering a massive cleanup effort that has cost the company more than $1 billion and kept the river closed for nearly two years. Although the EPA signed off on the last of the cleanup in early 2014, oil from the spill stills remains on the river bottom and likely will for years. 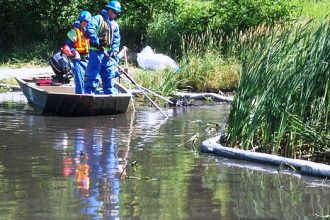